I wonder what kind of car Eileen Getty rides in now? Maybe she walks and takes the subway?

He must work for McLaren

I wasn’t able to catch the Heavenly Bodies show. Maybe they’re featured in the catalogue?

Serious question: is there still much of a point to “building awareness”? It seems like everyone’s already aware, the problem is that a lot of people (especially those in power) don’t care.

Aware of what though? Sure, surveys show most people are aware of climate change, and want something done about it. But if you dig deeper, it turns out there’s a huge gap between awareness of climate change and awareness of just how massive and urgent a problem it is. Very few people really understand the speed and scale of societal transformation needed to avoid making much of the planet uninhabitable. Such a transformation could have been managed in graceful orderly way if we’d started on it in the early 90s - if people had really listened to the warnings presented at the Rio Earth summit. But we missed that window. These activists are at the forefront of a new wave of direct action, because they realise the only way we get there now is by smashing the machines and separating the oil barons from the source of their profits. Direct action like this isn’t designed to raise awareness or convert people to the cause. It’s goal is to signal to those who already understand what’s needed that it’s time to start the smashing. You can disapprove all you like, but unless you have an alternative plan and evidence that it will work, you’ll be on the wrong side of history.

But this isn’t smashing the machines, this is spraying paint on a dealership, and will soon be forgotten. The cost of cleaning up that paint is probably less than they make by selling just one car. If you want to start the revolution and smash the machines, mess up their production line. Shut down a refinery. Disrupt shipments of their cars.

Then again, that comes with far more serious consequences than spraying paint on a building. This accomplishes nothing, and it definitely doesn’t communicate the severity of climate change. If it’s really all that cataclysmic (being rhetorical, it is cataclysmic), why is this all you’re doing?

EDIT: I’m a little sad that my followup to a reply to this got wiped with the reply, but it’s alright. I do want to repost what I think was an important bit, though (lightly edited):

[Don’t suggest that specific individuals] should be the ones to do something. It takes groups of people, and a lot of individuals don’t have the bandwidth, let alone means, to do anything right now. […] Join or start a group and invite people in, then figure out something your group can do that will have more impact than a few headlines and a bucket of paint thinner. The “what are YOU doing?” guilt trip is not helping anything.

A just cause deserves competent activism.

Yep. Competent activism must disrupt business-as-usual and fire up the public imagination for something better.

He got a bit of the first component. Part marks.

I suggested agent provocateur a few days ago, and from reading other British libertarian-socialist people it looks like I wasn’t the only person thinking it. Actually infiltrating existing anarchist organisations is hard and getting activists to do something they don’t want to do is near impossible, and existing hierarchical organisations take time to climb to a high enough position to do damage to their reputation.

This leads to the third option, start your own organisation and target people who are foolish enough to damage the reputation of every green movement.

Anarkiddies have been notoriously easy marks for police agents provocateurs and infiltrators since the anti-globalisation demos of the 1990s.

I suspect that most of them have no links with any form of anarchism, otherwise they would have been told that this is a stupid move.

Maybe there’s a few proto-insurrectionist anarchists involved, but they usually prefer more violent means and have better opsec. For them disruption is the aim, not the publicity.

To be clear, I use the term “anarkiddies” to distinguish them from serious anarchists. The former display the same empty and ineffective attention-seeking mentality as the idiot in this video but I agree there’s no connection I can see in this “protest” to any expression of anarchist ideology.

One of the positive developments I’ve seen in the last decade in the anarchist/libertarian-socialist movement is educated and experienced activists like yourself curtailing stupid and counter-productive tactics in favour of mutual aid and mutual self-defense and effective and targetted direct action. The leaders and funders of the climate emergency movement could take a lesson.

It’s reasonable to work on the assumption that a violent and attention-seeking clown is a police agent and tell him to go home, even if it turns out he’s just a thirsty idiot. Either way there’s no damage done to the main demo.

Most birds fly. Most birds are also not potty trained (even the Clever Crows). Therefore, it's statistically likely that a bird will poop on something or somebody inappropriate while flying or perching. And, of course, a lot of people (especially …

Although now owned by a Canadian. 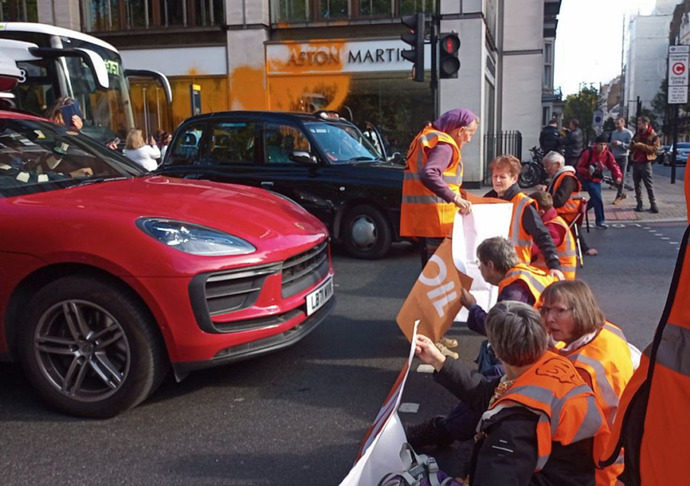 In contrast to the spraypainter, these fellow protestors aren’t attention-seeking performance artists. And look, they even have a sign identifying their organisation.* A more effective video than the one posted in the original article would have focused on them, making the headline “Grandmas and grandpas blockade posh London street for JustStopOil”. Apparently, the olds were too boring for the videographer, but watching an edgy dude spray paint a luxury car dealership before hamming it up without a script was more compelling. A corporate media outlet couldn’t have done a better job of distorting the demo.

[* Here’s a good heuristic for effective protests: the less work the target audience of your direct action has to do to find out what your org is and why you’re doing what you’re doing, the better. This is basic stuff, activism 101. If this action was about building awareness about the need to take substantive action on the climate emergency or the org, he did a crap job.]