Getty Oil was sold in the mid-1980s so she’s unlikely to have any particular interest in oil, other than as might be found in any broad portfolio.

They laid the signs on the ground in the video in the OP. I guess they’re Doing It Wrong™ again.

Yes, they are doing it ineffectively as usual. The first 40 seconds are of randos spraying orange paint on Harrods. Then you get some guy rambling on incoherently without getting to the main point (that Harrods is owned by the oil-dependent Qatari sovereign wealth fund), (again) without taking 5 seconds to state his org’s name. Halfway in we finally see the street blockade and can see part of the sign showing the org’s name before it’s stolen by the rent-a-cops.

As with the Aston-Martin protest, this was filmed by the activists themselves. As in that previous videographer, their incompetence matches the deliberate malice of the corporate media in depicting the protest.

That’s a better answer than anything these clowns offer.

The planet is burning, and you’re fretting about the colour of the paint???

People are not fretting about the colour of the paint. They’re curious what it represents, especially in the absence of the org’s name.

As I said, a just cause deserves competent activism. This is just performance art by attention-seeking individuals.

There’s only one way to know. I have no idea how one can assess the likelihood of the contents of a random strangers portfolio & assets.

Of the worst greenhouse polluters, it’s interesting to note that Harrod’s and Qatar don’t even rank on the top 100 list put out by U Mass.

But it’s so much more convenient and sexy for the performance artists to focus on luxury retailers and (for unknown reasons) fine art museums. Never mind that the wealthy, older and mostly white people who patronise these places are the people who care the least about the climate emergency. Where’s the glamour in protesting at some industrial park in the exurbs or the London HQs of these trans-national corporation where you might actually draw attention to major burners of fossil fuels?

Bingo! Keep going with that thought.

Are these protestors under the impression that it’s a grand revelation of new information for everyone else that wealthy older white people who buy from Harrods and Aston-Martin don’t care about the climate emergency? If they are, I have some real news for you about why choosing these venues is a waste of time and resources – especially when the protestors are so bloody incompetent in their basic praxis.

It’s about as useful as presenting a chart of global income deciles and associated percentages of CO2 emissions as if everyone on BoingBoing is completely unaware of the distribution: just empty virtue-signalling.

How do I even know that these aren’t wealthy people who buy from similar stores?

I certainly think there could be arguably more effective ways to protest but I have to say the reaction here from @gracchus in particular is extremely blinkered.

Orange paint on the walls is not the point. It’s a dramatic event that gets news attention and provokes conversation from various angles.

Firstly Harrods is a major luxury retailer in the center of the shopping heart of London, as we approach the height of Christmas shopping season. I didn’t know the connection with Harrods and I bet a lot of other people didn’t either. They don’t just sell leopard skin rugs to billionaires they make most of their money selling packets of fudge to normal people as Christmas presents. This will impact that.

And sure a lot of the conversation it prompts will be blowhards telling them they’re doing it wrong - but some of it won’t be.

It’s the kind of thing that will trigger a wave of debates on TV about ‘what SHOULD be done?’, school projects and all kinds of various chit chat on the bus.

The irony of someone who cares about the cause putting so much energy into denegrating people that are bothering to do something, anything, hopefully isn’t lost after some self reflection.

If you know the right way to do it then please, do! Because as we still have a crisis I assume that means you’re just not bothering? Because you’re obviously an expert.

How do I even know that these aren’t wealthy people who buy from similar stores?

Careful, you might blow the minds of these activists and their supporters.

If you know the right way to do it then please, do

Off the top of my head…

None of this is new information, nor does it come from any unique expertise on my part. Other protest orgs have developed and refined these strategies since the anti-WTO protests of the 1990s. Meanwhile, these fools are still acting like that era’s anarkiddies (as distinct from serious anarchists). I don’t believe this is a false-flag operation but I can understand why experienced activists might come to that conclusion watching these clowns in action.

Despite its continued operation, the Dakota Access Pipeline protests were pretty good and got it shut down for a while. Direct action against the offenders.

It’s a dramatic event that gets news attention

It’s a dramatic event the first time, by the third or fourth time it becomes a tired performance.

This will impact that

No, it won’t affect their business at all.

will trigger a wave of debates on TV about ‘what SHOULD be done?’

Or not. You might not have noticed, but there are other items in the news. And, like it or not, these actions will not raise the profile of the crisis any higher than it already is.

It’s a dramatic event the first time, by the third or fourth time it becomes a tired performance.

Especially if, as in the case of the van Gogh vandalism, there’s not a clear or clearly articulated link between the action and the issue at hand.

No, it won’t affect their business at all.

Bingo. And less than one day’s profits at the retail locations will cover an overnight power washing.

And, like it or not, these actions will not raise the profile of the crisis any higher than it already is.

It’s not like Al Gore or Greta Thunberg or other well-known names have been effective in raising awareness of the climate emergency, inspiring lasting mass protests and school projects over the past 15 years. Clearly what’s needed is randos throwing soup on paintings or spray-painting luxury retailers to finally get real action.

To be clear, this is not to say that more and different protests aren’t needed. But I’d rather see competent and effective ones that don’t make me respond by thinking “stop ‘helping’ please” and don’t inspire a wider public response of “what a bunch of virtue-signalling destructive arseholes”. 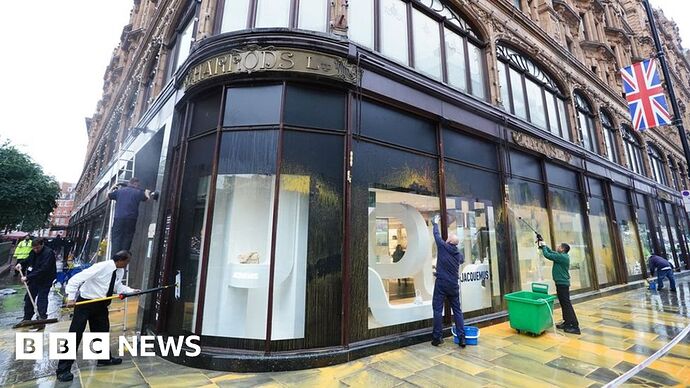 Harrods is the perfect target. It’s where the people who caused the climate crisis shop.

As if they couldn’t shop elsewhere.

I can understand why experienced activists might come to that conclusion watching these clowns in action.

Nothing quite as funny as watching one group of activists complaining about another.

I don’t believe this is a false-flag operation but I can understand why experienced activists might come to that conclusion watching these clowns in action.

Do you think about your responses at all? What groups would be better at critiquing the effectiveness of activism than other, more experienced, activist groups?

Nothing quite as funny as watching one group of activists complaining about another.

The criticism is not one of petty and esoteric ideological differences as satirised in Life of Brian but one of praxis. I don’t think it’s a false flag op, but at least one person here who suggested it might be one has serious cred as an activist in the UK – including participation in effective direct actions in the past.

Right now, they sell t-shirts with all profits claimed to go to either JSO or to the Climate Emergency Fund. That’s not to say that a predator won’t do exactly what you say and co-opt an activist movement into a cash cow. It’s happened before.

Really? I think I’ll buy one of their shirts, dye it to simulate splashed on paint, and wear it around town. Up the levels of general befuddlement.