Points off for the doll using a knock-off version, instead of the Bobby “Boris” Pickett original.

That’s not a Spotted Owl is it? If it is - & my valet is researching this whilst I write - CANCEL my BoingBoing subscription!!!

Spotted Owls are costing me & other hard-werking folks MONEY!!!$$$

Oregon, especially in some parts, is the France, Napa Valley & Oregon all rolled into a fat, sweet, blunt. These Owls do eat some of our product - no biggie. So do the deer - at least you can eat those guys. But the real problem is that sooner or later some damn long-hair hippies are going to protest us honest business folks clear-cutting unproductive forests for our crops.

Marijuana provides jobs, puts a roof over folks’ heads & provides medicine to all sorts of people suffering from pain & addiction, among other things. Come January, legal Marijuana will provide much needed funding in the form of taxes to fund our schools. Schools educate our future citizens.

These long-hairs want to take that away. Our children’s future is more important than some species of (f)owl. (cmon! there are a lot of owls - tons of them. They all look the same anyway!)

The Harvester’s Union also agree with me. The Shop Steward also points out that Spotted Owls butcher cats wholesale. Small dogs of the sort walked by grandmas are also targeted by these vicious, sneaky, intelligent RAPTORS. You read right - RAPTORS. But these are not Bald Eagles - they are lascivious killers.

In addition to threatening the livelihoods of hard-working citizens & threatening their kids’ ability to attend decent schools, these feathered Blitzkrieg Nazis & their long-haired defenders are also traumatizing our senior citizens. This madness must be stopped.

Would anyone but another Oregonian get this?

Well, whether or not it’s a bad thing is a philosophical question I guess. I like cats personally. Nevertheless, domestic cats do kill a lot of birds.

Okay. I do like cats on an individual basis, but I do not like cats pillaging product (but not quite as bad as deer tho.) Yes, teh owls do help me somewhat. But if owl-loving hippies from Humboldt State University come up here & cost us money… this owly help is for naught & then we have problem.

Cats I suppose, are world-wide problem. In addition to stealing the breath of our babies, they are also endangering some bird species :

Cats kill up to 3.7B birds annually

Cats that live in the wild or indoor pets allowed to roam outdoors kill from 1.4 billion to as many as 3.7 billion birds in the continental U.S. each year, says a new study. 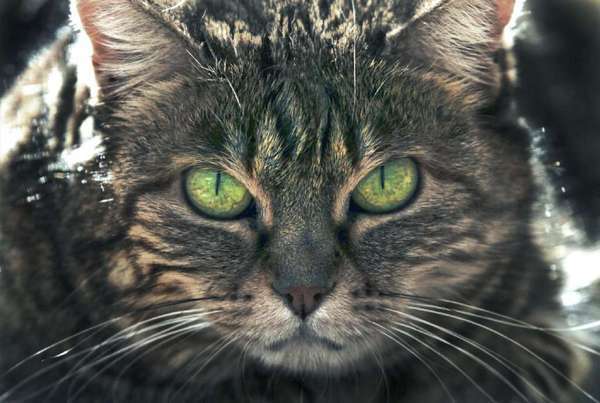 Academic researchers and federal scientists have for the first time come up with direct evidence of feral cats killing endangered Hawaiian petrels. The study, by scientists from the University of Hawaii, the National Park Service and the U.S....

A New Jersey city struggles to find a compromise between the two.

The house cat -- that cute, furry feline beloved the world over -- is also one of the world's most destructive predators, killing for kicks and hunting rare species into extinction. Cats thrive because people protect them -- but should they?

Would a non-Oregonian get this?

I dunno. But isn’t that part of the fun? Every time someone out there Doesn’t Get It, my tiny house under the bridge becomes more cheery.

We all saw Futurama, we know the scourge of the Spotted Owl. Even NNYC doesn’t escape its mighty talons:

Irrespective of how much you may like cats, they care nothing for you (or anybody else).

I understand the Nietzscheans in Gene Roddenberry’s TV series Andromeda were inspired, in part, by some of his & Majel’s cats. (FWIW)

On the Internet, nobody knows you’re a Dog.

Cats that live in the wild or indoor pets allowed to roam outdoors kill from 1.4 billion to as many as 3.7 billion birds in the continental U.S. each year, says a new study.

Except those are pretty much bullshit numbers.

Yes - you’re right. I have seen your linked article & related ones before.

My posts in this thread were (I hope) an attempt at some sort of humor. I try do this only in low traffic threads & make it an obviously humorous post that tries to contribute some topic-relevant insight using humor, or my attempt at it.

I’m not sure my initial post was relevant, but it was such a cute pic/vid I just had to write something.

BTW in response to your Q. on another threat that expired before I could answer- -

I had a class a long time ago for marbling paper - done it occasionally since - but I’m not the best source for advice about it.

Here is a link to a coherent tutorial. Of course, I’m sure it’s easy enough here to find instruction…Maude Kerns, U of O Craft Center maybe.

I dare say it’s accidental, but I like the way the chick seems to be screeching in time to the music, mostly.

didnt know that robot came in other models. I tried annoying my cat with the cat variant and got a bored look.

she was one of my faves too, best real life representation of fun fur I have ever met.

Yes - you’re right. I have seen your linked article & related ones before.

My posts in this thread were (I hope) an attempt at some sort of humor. I try do this only in low traffic threads & make it an obviously humorous post that tries to contribute some topic-relevant insight using humor, or my attempt at it.

Well, cats don’t deserve a reputation as mass bird murders. Instead, they should be known for jumping into cribs and stealing a baby’s breath, and of course, waiting for their owners to die so they can eat their eyeballs.

That’s an incorrect translation. It’s supposed to be:
Ah. Cats taste so good with lime.