Afghanistan Pullout: The Best Biden Could Do, or Total Clusterfuck?

Heartbreaking: The Worst Person You Know Just Made A Great Point

A heartbreaking story is currently unfolding that’s sure to have devastating ramifications for years to come. Just moments ago, without any warning, the worst person…

I’m having trouble finding it now, but I was reading a blog by a military historian, where he chimed in about Afghanistan, and it’s “graveyard of empires” reputation.

Apparently, historically, it was almost always part of one empire or another, for hundreds of years at a time. Even was the capital of a couple of them. All that was back when it sat next to the silk-road trade route though, which it could control and there was lots of riches to be made. Once the silk-road was replaced by sea routes, no empire cared enough about Afghanistan to make any serious commitment there, as there was nothing else valuable there worth making an effort to conqueror. Just hard-to-travel mountains, and some farmland which only can really grow enough for the local population.

there was nothing else valuable there worth making an effort to conqueror. Just hard-to-travel mountains, and some farmland which only can really grow enough for the local population.

The Taliban are sitting on $1 trillion worth of minerals the world...

The swift fall of Afghanistan to Taliban fighters has triggered a humanitarian crisis, with thousands trying to flee the country. It's also brought renewed focus on Afghanistan's vast untapped mineral wealth, resources that could transform its...

Well, that was mostly recent discovery. For most of history, minerals like lithium and other rare-earth elements weren’t valuable enough to committing armies and long-term military presence to get it. So, that enforces my point that Afghanistan being a “graveyard of empires” is not really a thing for most of history, as I’m sure that whichever empire really really needs those (China?) will now be willing to make the massive military commitment required to control Afghanistan for the long term to get it.

I see, but you did write,

Once the silk-road was replaced by sea routes, no empire cared enough about Afghanistan to make any serious commitment there

The U.S. is an empire, and its 20 years there was a pretty fucking serious commitment. Apparently, a big part of that commitment was, and may well continue to be, focused on resource mining:

Why the US will never leave Afghanistan

Given many realities, while it is likely President Biden may carry out his promise to withdraw America’s remaining military forces in Afghanistan, the U.S. is not going to leave or abandon Afghanistan and concede that vital space to China.

What I don’t understand about this is why weren’t western companies grabbing for all that mineral wealth? For that matter, why weren’t Chinese companies doing business there while we were there? I mean this seems like it would have been the most obvious way for the former Afghan government to get power and legitimacy. How were they not taking advantage of it? What is different between the former government and the Taliban in this respect?

Western companies certainly have been trying. I haven’t kept up with the effort, and why it failed, but this 2016 report provides a lot of reasons:

The U.S. Spent a Half Billion on Mining in Afghanistan With ‘Limited Progress’

The Special Inspector General for Afghanistan Reconstruction has labelled yet another project in danger of failing. This time its U.S. plans to develop the country’s oil, gas and minerals industries.

Near as I can tell, corruption on all sides has been the biggest problem, but also, undercutting of western efforts by various Afghan forces – after all, why SHOULD they cooperate with other countries that clearly seek to extract nearly all of their country’s wealth for themselves?

The U.S. is an empire, and its 20 years there was a pretty fucking serious commitment. Apparently, a big part of that commitment was, and may well continue to be, focused on resource mining:

We’ve been in Germany and Japan for 70+ years. We’re still there. With a lot more troops than we’ve had in Afghanistan, even though we have had no German or Japanese enemies to fight for the vast majority of that time. And we dropped countless amounts of money into building their economies up back when they needed it after WW2. We’ve been there for generations, supporting them and turning them into allies.

What it looked like to me was we never made that sort of serious commitment in Afghanistan. We mostly just had a token force the majority of the time and paid off the local criminals to keep them from attacking us. We only had the bare minimum we needed to retain some semblance of control of the country. It would have taken many thousands more troops (and casualties) to really route the Taliban completely and help put in place a lasting government (which would have needed to not be filled with the corrupt people we put in) to have a hope of making a lasting change. And we would have needed to be there a lot longer than 20 years. As it is, we never made enough of a commitment to actually remove the various warlords and criminals. Our original mission was just to “stop Al Quida”, which apparently required taking down the taliban at the time. And afterwards, I’m not really clear what our goals were. And from what I’ve heard from soldiers who were over there, they never did either. We were just more-or-less keeping the peace, on a temporary basis.

We should stay everywhere for 70 years.

With close to 1000 military installations around the globe, we nearly have. We’ll be “staying” in Afghanistan too. That pie is just too juicy to simply leave for others’ forks. 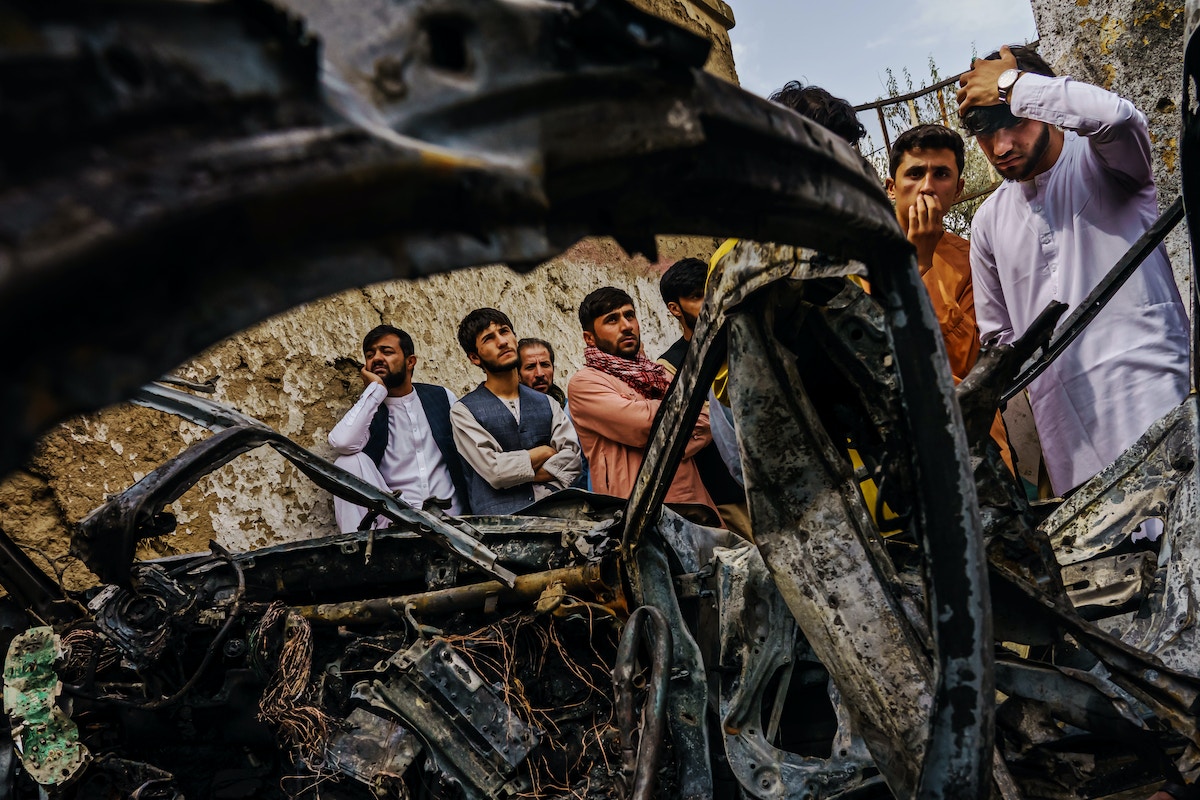 U.S. Drone Strike in Kabul Killed a Family — and Began a New Chapter of the War

Though U.S. forces are leaving Afghanistan, the war could continue with remotely controlled drone strikes — and even less accountability.

The US, despite all attempts by the neocons and the GOP, has determined that it simply cannot stomach the idea of committing itself to empire. At least, not in Afghanistan. (noting our “empire” is still alive and strong in many other locations)

Thus, all our endeavors in Afghanistan were doomed to eventual failure. We could only stomach a short-term commitment there, rather than the empire sized commitment that would be required to actually change it (and it’s culture) to something more like ourselves.

The US, despite all attempts by the neocons and the GOP, has determined that it simply cannot stomach the idea of committing itself to empire

The US is an Empire. Just because it doesn’t look like the British Empire, the Ottoman Empire, or the Roman Empire does not mean it is not an empire. What an empire looks like over the course of history has changed dramatically over time to fit with changing sensibilities about what is acceptable forms of governance and control of resources.

We genocided our way across the continent, across the pacific, and still have military installations all over the world. We’ve enforced the capitalist system where ever we went. Countries that did not fully embrace capitalism as we saw fit, we overthrew their governments.

American is an Empire. Full stop.

The US, despite all attempts by the neocons and the GOP, has determined that it simply cannot stomach the idea of committing itself to empire.

That’s exactly what I said to the King of Hawaii the other day.

But aren’t “those people” better off being part of the good ole USA! /s

We’ve been in Germany and Japan for 70+ years. We’re still there. […] That’s what commitment looks like.

Just to complicate things a bit:
this line of argumentation, which I didn’t change from above but just omitted something important in between, is exactly what the extreme “left” and the neofascist scum have been saying in Germany. Their “arguments”, brought to context, are ahistorical and quickly turn into self-referential nonsense, often even incomprehensible levels of bullshit. This way truly madness lies, apparently… sighs

Just to be clear, have they been saying that about Germany, or the US?

About the US in Germany.
I’ll exaggerate, but only to a certain extent.
“Leftists”: The imperialist USA used it’s economic power and strong military presence in Germany to suppress freedom in the German society, and we need to get rid of them to start a peaceful revolution.
Neofascists: the US have invaded and enslaved the German people by force and by the power of money, and the ‘internationalist’ government is their puppet. Germany is a broken nation, but we need to look at the strongman politics of the US and learn from them to compete with them. (Right-wing weirdos: the Federal Republic of Germany doesn’t even exist, and Germans live under US military occupation.)

I won’t dive into details of any “argument”. (Seriously, I tried more than time and sometimes had… difficulties to recover.) I don’t want to put too much emphasis on these extremes of the political spectrum.

The important bit is:

We’ve been there for generations, supporting them and turning them into allies.

I would argue that, on a close inspection, this isn’t exclusively empire-building. The motivation was quite certainly present and strong during the cold war. However, completely dismissing the concerns about how to establish a stable society which guarantees human rights to everyone would be just a bit too much, I think.

we dropped countless amounts of money into building their economies up back when they needed it after WW2.

I would be pedantic about the “countless” and the “dropped” here. Much of it was credits which were intended for and used for buying American goods, to stabilise US economy and to build a stable economic intertwinement. We can count this as building an empire as well as trying to ensure a peaceful relationship to prevent future war. Again, insert a [both.gif] of choice… sighs

However, completely dismissing the concerns about how to establish a stable society which guarantees human rights to everyone would be just a bit too much, I think.

I mean, I might buy the stable society part. For the second I know too much of how the US has operated everywhere else to really believe in it.

I know that, too. At the same time, I can think about the horrors that happened during the third Reich, and remind myself that basically everyone I interact with on a daily basis has either relatives who suffered from this horrors - or were complicit, of not actively involved in a way.

Considering this, and without giving too much credit to the US, I think trying to establish and ensure human rights for everyone was a political motive which should not be completely dismissed.