the children’s lead levels is the most disturbing statistic for me.

Clearly what those people need most are some tax cuts.

I suspect there’s more I need to know.

Some die fast and flashy from the bullet or the baton.
The rest die slow and silent from poverty and prison.

Another good reminder in case anyone needs more perspective: 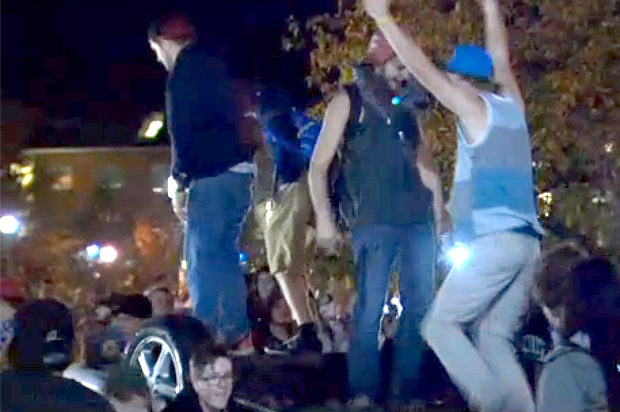 Riots may not be an especially productive way to solve problems but at least the people in Baltimore have a decent reason to be pissed off.

It’s important information, but it’s certainly not “all we need to know about why there are riots in Baltimore.”

I think it’s essential to also know about rates of arrests and police brutality and police corruption. I think that might have something to do with the riots.

You suspect correctly:
[Eyewitnesses: The Baltimore Riots Didn’t Start the Way You Think][1]

Thank you for that. Any sports-related crime from rape to riot seems to get a free pass, yet the moment black people riot in reaction to severe, chronic injustice and a very understandable feeling of powerlessness, everyone is quick to scold them with patronizing remarks about how tearing up their own community doesn’t help. Maybe not, but it’s pretty unreasonable to expect that level of completely justified fear and rage to stay contained. Yet when white people riot because their team lost (or won) a sports game, for no other reason than because they’re privileged, entitled assholes and they know they can get away with spreading a little misery to others, it’s soon forgotten.

All I need to know is in the charts? Oh I see, oh right people are poor, poor people riot, nothing new here. No need to read the article, right?

There is a hypothesis regarding a correlation of lead levels and crime rates. It’s inconclusive, and even if there is some causal relationship it’s certainly not the only factor, but it’s something to consider.

It’s definitely worth mentioning, but as far as I can tell from the literature, there’s a lot of delay in the signal (not necessarily dis-confirming the hypothesis, due to generational effects), and the effect doesn’t seem to be very completely accounted for, but it looks like there could be a signal there from the discontinuation of leaded fuels.

It’s been a long time since I’ve worked with stats rigorously, and I’m sure that I would make myriad mistakes trying to play around with the studies mathematically, but they’re definitely very suggestive.

I’ve yet to see stronger alternative theories, but I don’t think reduction in lead exposure can account for all of the effect, taking into account pre-leaded fuel levels of violence.

You’d also have to look for sources of lead exposure specific to that neighborhood, since it’s no longer coming from automobile exhaust all over the country.

That’s the really tricky part, isn’t it? There’s a large, statistically significant (read: not necessarily causative, but definitely interesting) correlation at the national level for banning leaded fuels and reduction in violent crime, but when you zoom into very granular levels, the statistical power whimpers out since there’s so many confounding factors and things like socioeconomic status and genetics kick in and become the likely dominating factors.

That’s the danger of doing statistical analysis and attempting to apply it to individual situations. The probabilistic nature leaves large portions of the smaller population that includes the individuals cold because making a change that has 3 standard deviations from the mean as its effect at the national level doesn’t always make any difference to smaller constituents of the population.

It’s like trying to integrate quantum mechanics with general relativity, you have two working models but each model only seems to apply to specific sets of circumstances. Although we can pretty definitively conclude that lead exposure is bad for everyone at all times and has cumulative effects that are much stronger on developing individuals than adults for a given level of exposure.

Seriously, I can’t wait for a working model of a human. Although an accurate simulation of a human being brings its own ethical issues as well, seeing as a perfectly simulated human is basically indistinguishable from a naturally occurring human out in the physical world. Or at least is indistinguishable in all the measures that count.

Seriously, I can’t wait for a working model of a human. Although an accurate simulation of a human being brings its own ethical issues as well, seeing as a perfectly simulated human is basically indistinguishable from a naturally occurring human out in the physical world.

Perhaps an investment banker would suffice?

Reminds me of a totally factual news report (but they take pains to point out it’s a satire):

What obvious to some is news to others.

Thanks, excellent! That video should be on the front page of BB.