Thank you for one of the more balanced versions of the story. The media are maligning the actions of thousands of peaceful protesters because of the actions of a few criminals, and often forgotten in these accounts is the real story - the unaccountable death of a man while in police care.

I kinda wish the Boondocks alternate reality where MLK Jr wasn’t killed but in a coma and woke up today was real. We need people like him.

Every sizable community is replete with people like him.

That is not to diminish MLK Jr.

In his time the movement he was a part of shook the foundations of the institution.

Since then the institution has adapted to accept the rumblings of civil unrest without being shifted. Certainly some of those adaptions work to diminish what great leaders and orators are not absorbed to the point that they become the institution. Primarily this is done by criminalizing them early.

Pretty sure the only solution will be to shake it up beyond what went before.

I don’t trust the police, either.

Also not mentioned in the mainstream media articles covering it is that there have been several other black men who have died in police custody in equally horrific circumstances in baltimore over the last couple years. This is not an isolated incident, and I can totally sympathize with anyone who feels that that’s cause for a riot. Fuck the police. Every single officer in that department who hasn’t come out in favor of prosecuting or at least firing the perpetrators of this shit is no better than a brownshirt, and has not more moral authority.

Two wrongs don’t make a right. How does looting a 7-11 affect the Police? They had nothing to do with it. It is misdirected energy.

Furthermore these actions make people write off everyone as just a “bunch of thugs and entitled thieves”. They become completely deaf to the original legitimate complaint.

There are thousands of protesters. Only a few criminals are being covered. They aren’t protesters, they are criminals.

these actions make people write off everyone

Maybe dumb people with no empathy.

Maybe dumb people with no empathy.

Eh - I wouldn’t say that. I would say misinformed. This BB article is the first non-violent pics that have cropped up in my media streams. The looting is what is trending - not the peaceful protests, because it gets more eye balls.

Also anyone who did have some biases, conscience or not, just had them re-enforced. Though it’s hard to blame them with the narrative being spun.

Would you say that it’s just a few bad apples? And that the people who see them do this should turn them in?

Because having the police do speak up, get him medical attention and, here’s the big one, acknowledge why he was even arrested in the first place would have prevented this.

Here’s the first page on my Facebook feed from people in Baltimore.

This is part two in my photo coverage of the protests in Baltimore, Md. after the death of Freddie Gray from injuries suffered while in Police custody. The first day I was there the protestors pretty much stayed in their neighborhood in western...

The circumstances surrounding this young man's death are complicated. When This American Life recently did a story on Eric Garner, one of the police officers they interviewed gave a well-reasoned explanation for how mistakes like these occur. Police officers get jaded after many years of hearing detained suspects say things like, "You're hurting me," or, "I can't breathe," or, "I need medical help," because so often it isn't true; oftentimes, people say these things in a moment of frustration or as a last-ditch effort to avoid getting thrown into the back of the squad car. Now, I know the argument against this would be that if someone says they need medical attention, we should _always_ give that person the benefit of the doubt. But I also think we also need to consider the perspective of police officers, and *gasp* maybe even place a little more confidence in their exercise of professional judgment.

Anyone who has worked with the general public knows that it's a hard job. And being a police officer has to be one of the toughest public service jobs. Police officers are on the front lines for dealing with a lot of pent-up frustration in our society; issues like unemployment, addiction, hopelessness, etc. Part of the bargain that we enter by giving police the power to use force for our protection is that we entrust them to exercise their best judgment in difficult circumstances. The officers in this case made a bad call. But I don't want them to be afraid to make that call.

But I also think we also need to consider the perspective of police officers, and gasp maybe even place a little more confidence in their exercise of professional judgment.

Unfortunately, when they do, the mistakes are catastrophic. But most of the time, they don’t make mistakes.

Most of the times, the mistakes (and “mistakes”) aren’t catastrophic and they get away with whatever crap they do. Most of the times the arrestee survives with at most some bruises and/or a difficult-to-pay unfairly sized fine. This kind of daily grind is what wears the population’s patience thin. The occasional higher-grade mishap, the kind when somebody actually dies, then does not have enough of public goodwill left to be absorbed quietly.

The officers in this case made a bad call. But I don’t want them to be afraid to make that call.

It doesn’t take so much. Just don’t beat the suspects and uphold the laws and internal regulations in their own service. You know, the policing thing, applied to themselves too.

Thanks for joining BB to stand up for the police. We know they’re faced with the difficult prospect of doing a difficult job.

We do entrust them with the power to use for for our protection. But every time an individual officer betrays that trust, the integrity of the group as a whole is damaged. And every time they betray that trust without even the veneer of accountability, the trust is further damaged.

And to go back to what I’ve said earlier, because I see the police as a whole, made of individuals, I don’t know which ones to trust, so out of self-preservation, I start all interactions with them from a position of distrust. Not my fault; theirs.

I was talking more about torching cop cars than trashing a 7-11.

Police officers are on the front lines for dealing with a lot of pent-up frustration in our society; issues like unemployment, addiction, hopelessness,

police brutality, systematic oppression by a band of armed thugs, etc.
You do realize I hope, that in this case they ran down someone they didn’t have any reason to suspect of a crime, and that there have been several other deaths of black men in police custody in similarly fucked-up circumstances in the past few years? If you didn’t realize that, you might think about educating yourself before succumbing to your innate reflex to suck the dick of anyone in a uniform and a shiny pair of boots, and if you did, and would say what you said anyway, then I really don’t know what to say.

The officers in this case made a bad call. But I don’t want them to be afraid to make that call. 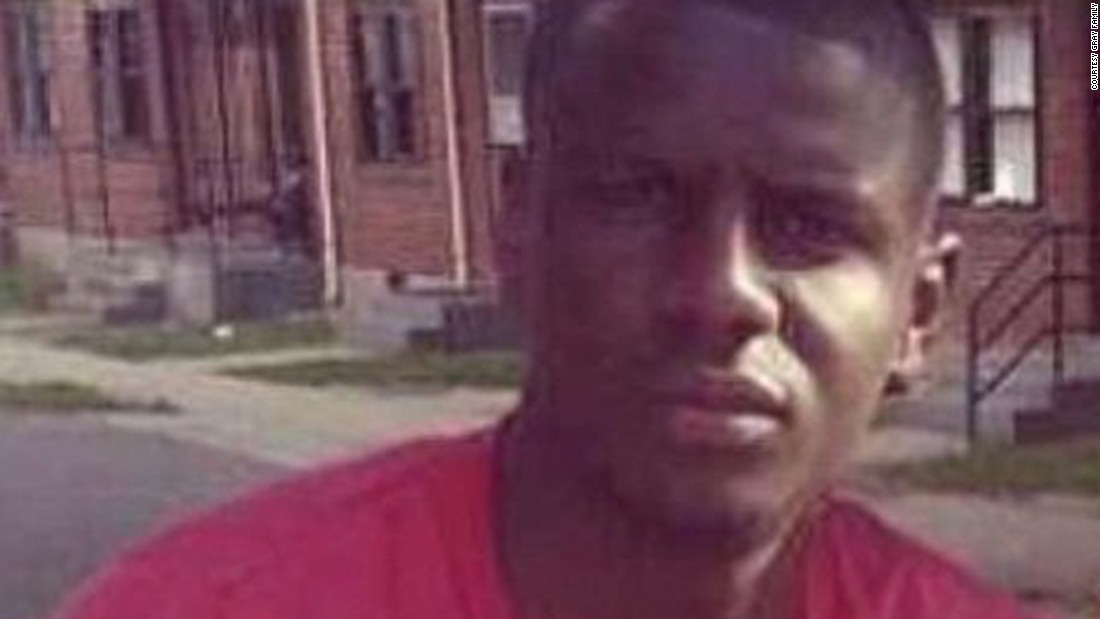 Freddie Gray was not buckled into seat in a police van while being transported after arrest nor did he get the proper medical care, police said Friday.