I couldn’t find it in the linked article and am sorry I have to ask this question at all, but are these two killers still on the police force or hired by another one?

Well, it’s pretty obviously a very basic retype of the DA’s press release, so no, not really.

I think any time the police or the prosecuting authority says something like:

“The suspect refused to dismount from the tractor and a struggle ensued.”

you know that they’re trying to slide over something.

" A struggle ensued", did it? It just happened? No one started it, it just spontaneously ‘ensued’?

I am sure they will apologize (through department-hired-lawyer-drafted statements). I am sure their chief will speak into microphones about how this is not how they normally operate and these officers made a mistake and will be disciplined (unpaid leave, internal affairs investigation). I am sure there will an effort with “community involvement” to determine what went wrong and results of this could include mandatory training for the entire department. And I am sure they will be back on the force within, say, nine months and it will be like this man was never murdered at all to them.

white cops kill black man over nothing - business as usual in Amuhrica.

Nah, as a person who has been part of GDPR planning, I think it is more:

We have no idea how our system works or even stays running. The cost to track down every database table and log (that no one looks at) that might contain a user’s name, ip address, email address, etc. is more than the business (hah) from the EU will provide. Plus, the penalties for violating the GDPR are so high (up to twenty million euros or %4 of global business whichever is higher), that it is easier to just straight up ban any IP from the EU and hope that is enough.

He demanded to see an arrest warrant.

The arrest warrant was for simple trespassing

Wait. He asked to see a warrant that they could actually produce? The officers could have asked for and shown him a copy of the warrant? They had the means to answer him. In the video he asks them to produce the warrant. The reply was, “It’s at the office… Come with me.” So, instead of asking someone to bring up the warrant they just went to tearing him from the tractor?

The reply was, “It’s at the office… Come with me.”

Perhaps in those mamby pamby North of the Mason Dixon states. MAGA!
/sarcasm

The irony is that HTTP status 451 was implemented as a way for websites to signal that their contents had been censored by the government, as an homage to Fahrenheit 451. What a positively Orwellian application.

" A struggle ensued", did it? It just happened? No one started it, it just spontaneously ‘ensued’?

The arrest then becomes a talking/waiting game.

But I didn’t become a cop to talk to people! Patience is so hard. We don’t have time for this.

I think that’s true, but there is an alternate, similar hold that can be used and doesn’t interfere with the airway. When the NYPD murdered that poor guy for selling loose cigarettes, they claimed they were trying to do the other hold, rather than crushing the guy’s windpipe like they actually did.

Officers are entitled to use as much force as necessary while making an arrest.”

Did they arrest him? No.
Much more force than necessary was used, resulting in the officers utter failure to make a simple arrest.

So, add successfully resisting arrest to the chargesheet? /s

And when you protest this sort of behavior, you are quickly labelled un-patriotic.

Yeah I heard Joe Rogan talk about that, and he was like, “Dude, let me put you in that hold if you don’t think it was a choke hold. It was a choke hold and you can easily kill someone that way.” 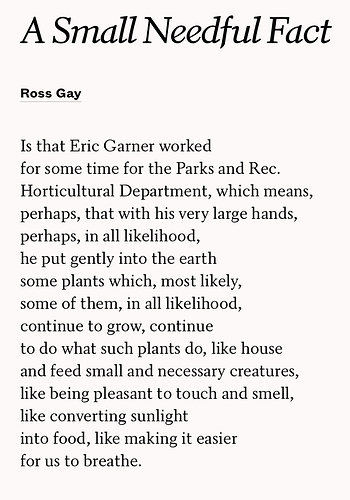 The only person imprisoned after Eric Garner’s murder was the guy who filmed it.

The disgruntled neighbor may as well have called a hit on Frank.

I seriously doubt the intention of the neighbors was to get the guy killed.