Any gingerbread creations this year?

Here’s mine: St. Michael’s Church in Hamburg. I try to visit and model a building every year; this one is one of the more iconic buildings in the city and can be seen by ships on the river. It burned down twice in a lighting strike and a fire, but was largely untouched during the Allied bombings in WWII (despite the rest of the area being destroyed). It has some association with with Carl Phillip Bach (JS’s fifth son), Johannes Brahms, Felix Mendelssohn and Johann Mattheson (who tried to kill his friend G F Handel during one of Mattheson’s performances, then translated and published Handel’s biography after he died in an unrelated incident). It also has a statue of St. Michael conquering the devil above the entrance and a pulpit that looks like something out of Half Life. 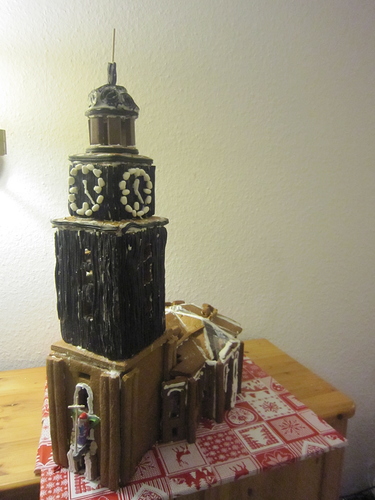 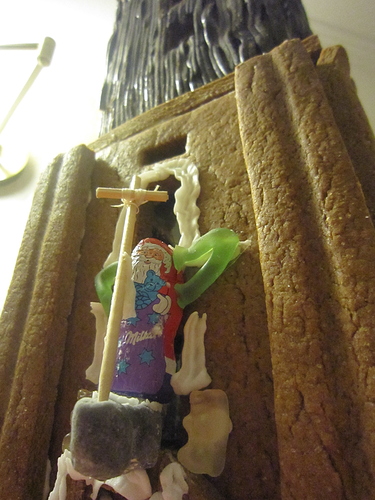 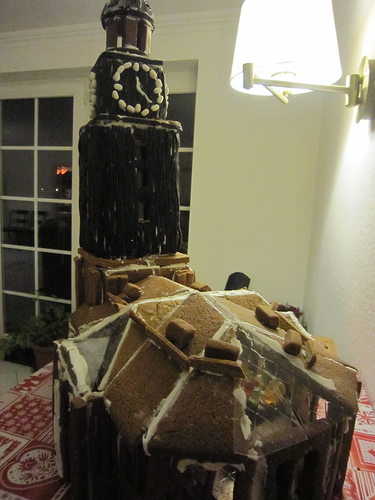 Congratulation for your work !
Can you tell us a bit more about it ? recipe for the biscuit, plans for the building…

One of the nice things about gingerbread is that the batter is so thick even before baking that it’s easy to bake it in the shape(s) you want. For example, growing up we used to use shirt cardboard (used by dry cleaners when folding men’s shirts) to cut out exactly the shapes we wanted and then we’d put the batter on those patterns and bake them. After they came out of the oven and cooled, we’d use masking tape on the inside to join the seams and very thick icing (using powdered sugar, icing sugar, not sure what the term is where you are) to hide those seams on the outside. You can see the seams of icing in @jsroberts’ photo.

Actually, now that I look at the photo more closely, that looks like a ginger cookie batter rather than true gingerbread. In fact, looks too yummy to waste on a centerpiece!

I used this recipe - It’s pretty good for working with, although the first batch was really stiff for some reason. The second batch had a bit more molasses and wasn’t as tough, which made it easier to cut the second floor of the church interior to size later. Neither batch seemed that different in strength after coming out of the oven, but the second one was definitely easier to eat (I put a few extra scraps in with the shapes in order to test for consistency): 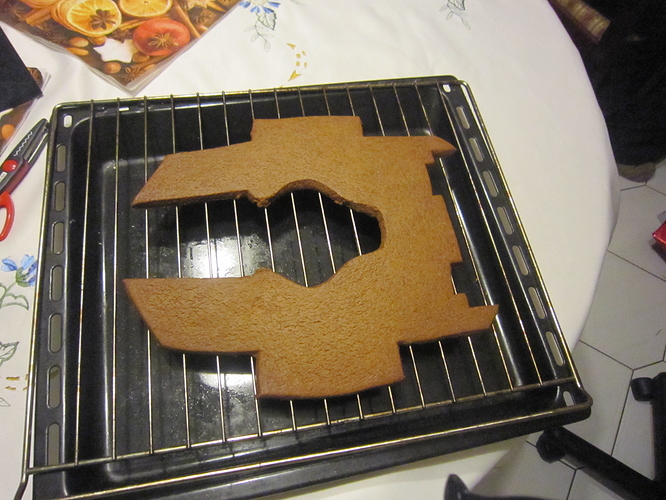 The windows and cutouts in the roof are leaf gelatine and the ‘cement’ is icing sugar with a small amount of egg white. The tower is unrolled Haribo licorice wheels. The interior of the real church is white and in baroque style, but I left it brown as I don’t fancy eating that much sugar.

I made the plans on squared paper, mainly based on this plan of the church and some guesswork as to the other dimensions. The tower is shorter and wider than it should be, but otherwise it’s more or less correct. I’ve made mock ups of gingerbreads houses before, but this time I just put the paper shapes over the gingerbread and cut them out.

@chgoliz I’m not sure what the distinction would be between cookie and cake mix in this context, but I did try making a 3D star with a normal cookie recipe a few weeks ago. It didn’t really hold together as well as I’d have liked, but I should really try a firmer ginger snap recipe next year. Some biscuits form cracks on the surface and rise a bit though, which would affect accuracy and appearance.

In my experience, the best results seem to come from getting a dough without a raising agent, cooking slowly for about an hour (the recipe I used this time suggested leaving the oven door slightly ajar to help it to dry), leaving the shapes to dry on both sides before using them and decorating before assembly. You need to get the consistency of the icing right, otherwise it will be too dry to stick or too runny to stay put. You can add a little water or milk to make it less stiff.

The kind of recipe we use in the States to make gingerbread architecture does not crack, period. It’s not great for eating, honestly. It’s for construction purposes only. I’m thinking maybe you have egg in your recipe? Which would make it a much nicer consistency for eating!

I can’t believe you’re planning on eating that! Why not spray shellac on it and keep it as part of your holiday traditions?

Why not spray shellac on it and keep it as part of your holiday traditions?

As far as I’m concerned, most of the fun is in finding interesting buildings that present a challenge to reproduce in gingerbread. This one has a large roof and odd shapes that are at an angle to other shapes and have to be cut right to look good. It’s also about learning as much as I can about a building, including its history, significance, internal construction and so on - it’s better if it’s in an area that I’ve recently moved to, as it’s all part of learning about the culture and history. In other years I’ve made the Hundertwasserhaus (interesting architect, organic shapes), St. Paul’s Cathedral (working out how to make a dome), the Sydney Opera House (more experiments with curved shapes), the throne room of the Imperial Palace in Shenyang (cool building with an interesting history and a traditional construction method with wooden beams that is quite different from European methods). I’m sure by incorporating other materials or tools you could make some really interesting constructions - baking a lattice dome on an upturned bowl, putting objects under a flexible silicone sheet to make landscapes, working with light etc… Most of my models are proofs of concept rather than polished constructions though, so I don’t miss them when they’re gone.

Awesome. A hat tip to you, sir!

I have next year’s project already picked out for you: 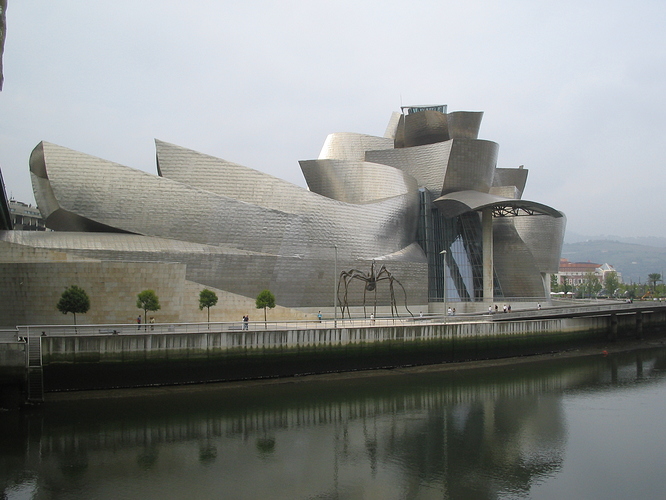 It would take some work to improve on this one: For this holiday season, Swedish 3D artist Caroline Eriksson decided to make an impressive present for 'The Hobbit’ fans. She created this amazing gingerbread sculpture of legendary Smaug – a fictional fearless and greedy dragon from J.R.R. Tolkien's...

This is great. I vote for Chartres for your next project: 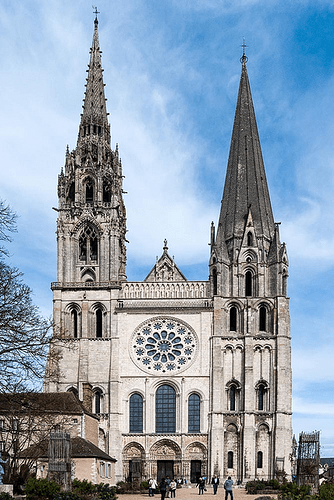 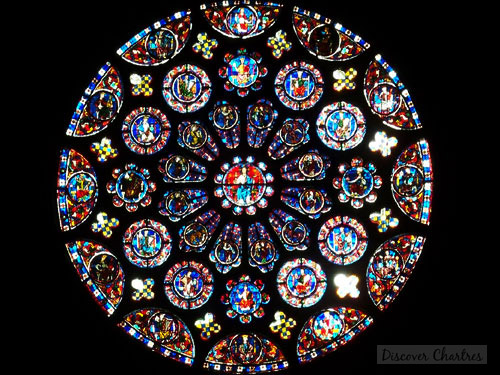 the icing off the wire whisk blender rods.

This was this year’s model - it didn’t last though, I think the walls were a bit thin so it absorbed some of the air humidity and collapsed not too long after I took this picture: 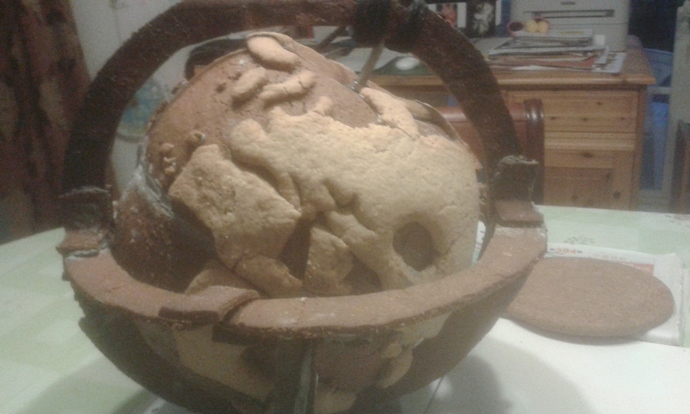 For a few short hours though, it rotated and everything.

This topic was automatically closed after 788 days. New replies are no longer allowed.