When weighed against all the nights where he didn’t kill his wife, this is just an outlier and can be discarded.

Those two could so be my favorite cousin and her husband.

If the JD bottle is on the right, what is being poured into the glass? And why is it such a darn big measure?

Probably Jim Beam! Heck, you need a big measure if you want to pass out and forget you have a cold.

Wow. The worst I do is a few weeks later my tivo is filled up with the most ridiculous stuff recorded and I realize I should never take ambien and start searching for something to watch.

Not to worry Jesus will forgive him, this time…

Jesus has had a hell of a lot of forgiving of his followers to do for about 1984 years now. One more won’t make any difference.

When weighed against all the nights where he didn’t kill his wife, this is just an outlier and can be discarded.

That is basically how medical trials seem to work nowadays, so yes.

Whenever some leaflet says “rarely experienced side effects” I can guarantee my wife will get them. But I do suspect that the reason they are “rare” is because when they showed up in trials, those trials got discarded for such reasons as experimental irregularities.

It can be refrigerated.

The fact he is an aspiring pastor has nothing to do with this, at least on the surface. We all like to poke fun at hyper religious people, but if this was a plumber or a physician, would you have the same reaction?

Cold medicine might induce psychosis, there are some documented cases - though admittedly they don’t involve murder. It’s also not to say this guy didn’t make up his excuse post-hoc.

Organic affective psychosis associated with the routine use of non-prescription cold preparations.

A patient experienced an organic affective psychosis on three separate occasions after taking recommended doses of non-prescription cold/sinus preparations. The possible underlying pharmacological mechanisms of this clinical reaction lend support to the cholinergic-adrenergic balance hypothesis of affective disorders. Recognition of this acute drug-induced state can lead to appropriate short-term pharmacotherapy and can prevent misdiagnosis of a major affective disorder or schizophrenia.

Phenylpropanolamine (PPA) is a sympathomimetic drug contained in numerous over-the-counter and prescription decongestants and appetite suppressants. A range of adverse effects have been reported, including neuropsychiatric reactions in patients known to be taking recommended doses. Given that psychiatric symptoms are not included in the manufacturer's lists of adverse drug reactions, the incidence may be significantly higher. We report a cae of paranoid psychosis following use of a decongestant containing PPA and summarize the case report literature of psychiatric adverse effects to PPA in which doses were known and stated to be within recommended guidelines. A pattern of possible risk factors emerges from these reports. These may include 1) symptoms or history of mood spectrum disorder, 2) history of psychosis, 3) female sex, 4) family history of psychiatric disorder. The possibility that a higher incidence of adverse events occurs in a vulnerable population has not been systematically addressed, and seems called for. We recommend that physicians specifically inquire about patients' use of decongestants and diet aids. In half of the above cases, symptoms resolved without the use of antipsychotics.

Over-the-counter medications are widely accessible and used. Cough suppressant syrups contain dextromethorphan (DM), which has the potential to be abused, with resultant psychiatric symptoms. This case report describes a young woman presenting with psychotic mania secondary to DM abuse. We also describe the treatment of this toxidrome and include the results of a literature search on this topic. The recognition of cough syrup as an agent of abuse and its toxidrome is important. This will facilitate early diagnostic clarification and promote efficient treatment strategies.

With the bare minimum of information provided in the linked segment it’s hard for me to feel like this is anything more than a tragedy.

There’s apparently a subreddit of people either posting while on Ambien or talking about what they discovered they did while on the stuff. 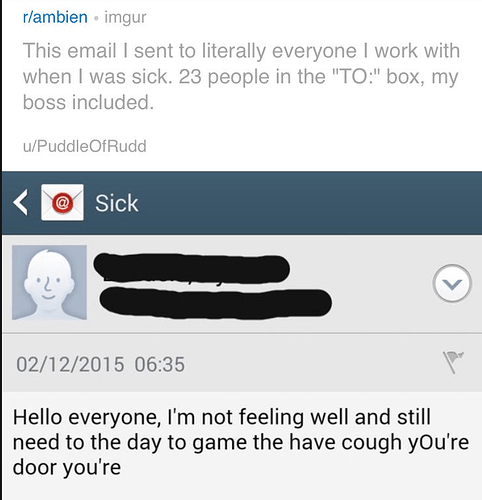 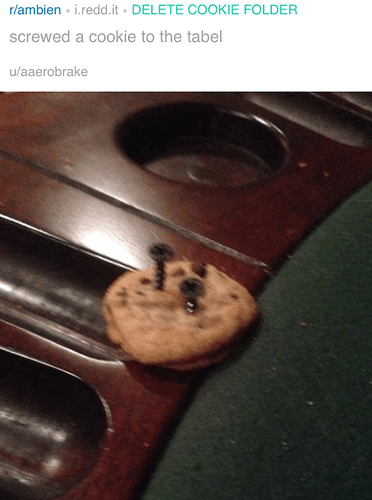 such a darn big measure

I knew there was something I was doing wrong.

Ah, the whisky cure; put a sock on one bedpost then drink until it looks like it is on the other one. Cured! Possibly…

If the JD bottle is on the right, what is being poured into the glass?

The Lounge lives in spirit…

Mr. Bells, a man who doesn’t even like to raise his voice and almost never says a mean word about anyone, turned verbally abusive on Ambien

I don’t use it regularly, but back when I didn’t know my pain meds wouldn’t let me sleep, I some times used Rozerem. It seems to quiet your brain, but won’t leave you a zombie if you have to get up to get the baby.

I swear I don’t know why that’s still on the market.

90% sure it is Amazon and Ebay etal keeping it on the market for late night sales.

90% sure it is Amazon and Ebay etal keeping it on the market for late night sales.

I had an HMO through an employer once, and my assigned PCP liked to just hand out drugs. I offhandedly mentioned that my job was keeping me up late, once, and she just handed me a bottle of Ambien. Did a great job of knocking me out for a week or so, and then stopped. I found out that you’re not supposed to take it for extended periods. Scary stuff.

I’ve been there, for myself and with family members. I had a doctor tell me once, “in the right person, any drug can have any effect.” Only a slight exaggeration. I also had a coworker who had a life-threatening allergic reaction to one of the “inactive” binders used to make an antihistamine tablet (she knew about the allergy, but it was to something that doesn’t need to be listed on either food or drug labels).

That said, I’m hesitant to blame clinical trials. In pretty much every cost-benefit analysis ever, researchers find that the FDA would save more lives on net by approving more drugs and tolerating more risk of adverse side effects.

If it was ambien, he’s got a defense. But ambien isn’t cold medicine

Actually, I read in one of the articles that it was Coricidin Cough and Cold.

So, a bit unlikely to be sure, but not impossible. Doing a whole bunch of dissociatives has been known to lead to… issues (ref: PCP).

Oh, and expect the media to run a series of moral-panic stories about the evils of dextromethorphan abuse articles…

if you have to get up to get the baby

You don’t have a baby.