Not directly related to the Cologne attacks, but politically interesting. Today the parliaments of three states were elected, the campaigns were dominated by the refugees topic. 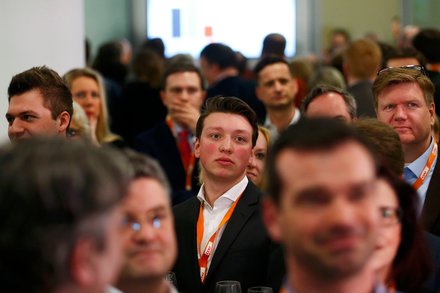 As three states voted, the ascendance of the Alternative for Germany pointed to strains from the chancellor’s policy of accepting refugees.

(btw, the Greens in Baden-Württemberg are not exactly left-leaning; they are on the conservative side of the green political spectrum)

Today the parliaments of three states were elected, the campaigns were dominated by the refugees topic.

They really are milking it. I bet AfD opened some champagne when they heard the news in early January.

Btw. they released the first photos of suspects a few days back. As I said back then, usually that takes a while.

A story from last week: Stefan Jagsch, 29, a regional leader of the extreme right German NPD party, swerved from the road near the town of Buedingen in Hesse in the morning of March 16, and crashed into a tree. A coach full of refugees, including two Syrian men came to the aid of injured Jagsch, pulling him from the wreckage of his vehicle and administering first aid before emergency services arrived at the scene.

It seems to be a common theme over the past year for Muslims to go out of their way to help non-Muslims, including risking their own lives to protect others.

short update: the BKA mostly closed the investigations of the new year’s eve events, the figures are non-satisfying and appalling

nationwide about 900 cases of sexual harassment with 1200 victims, the police could identify 120 suspects, but the evidence was too meager: to date four convictions, with very low probability to identify and prosecute more.

Hamburg was the second city with many sexual harassment cases.

A 19 years old Afghani was convicted to two years suspended sentence, the judges took it for granted that he injured and tried to rape a woman.

The sentence was according to the criminal law relating to young offenders as a court-appointed expert asserted “mental underdevelopment” (probably weird when one knows only the US system).

(SPON article, in German though)

no extraordinary pickpocketing or sexual harassment in Cologne, but a massive police presence and racial profiling. only two exits of the central station were usable, neatly divided in one for whites and one for non-whites.

fuck yeah! as if the AfD wrote the policing guidelines

n-tv (not known for a left position) described the procedure (in German, though)

Good to hear it was relatively peaceful, but not that racists got what they wanted.

I don’t know; I wouldn’t like to have the task of protecting public safety and freedoms at a time like this.

the checkpoints were fine - but the modus operandi is doubleplusungood. was it really needed to colour-sort humans? they already had two lines with security checks in place, the selection process leaves a sour taste

the checkpoints were fine - but the modus operandi is doubleplusungood.

It was more a general comment about providing security rather than any justification of the way it was handled here. Apparently a large group of about 50 young men arrived at once, and the police put them all in one place to check them more thoroughly. There were a lot more people who were checked though, and they were almost all from the Middle East or North Africa.

This evening the Brandenburg Gate was lit with the Turkish flag, in solidarity with Istanbul after the recent attack there (Istanbul is a sister city of Berlin). They did this last year too, after the airport bombings in June.

neatly divided in one for whites and one for non-whites.

A lot of Muslims are “white” skinned, and a lot of Mediterranean Catholics can be much darker skinned. How do they determine white versus non-white? As much as I could glean from the article, they’re even admitting that it was openly subjective who got shunted to which door. Just being with a woman was enough, sometimes, to make a dark man white enough. Bizarre.

North Africans have all sorts of skin tone. In fact, genetically speaking, people from the northern, southern, and eastern shores of the Mediterranean have more in common with each other than with the further-inland populations on their own continents.

Besides, as the article pointed out, a dark-skinned man with a woman would be routed through the white door.

And, as @renke pointed out, if they’ve got two lines and security set up at both of them, why move people back and forth between the two doors once they get to the front of their respective lines?

North Africans have all sorts of skin tone.

Of course. I am certainly not arguing that it works well, but you objected that a lot of Muslims were white skinned, which is true but not very relevant when that wasn’t the demographic they were targeting.

Well, the whole argument is neither here nore there, as telling a Moroccan from a Syrian would require linguistic expertise and listening to the person conversing in their native Arab, which is unlikely to happen under the circumstances given. So chances are they were NOT profiling for Northern Africans at all.

So chances are they were NOT profiling for Northern Africans at all.

Well, they were certainly trying to because that was the background of the bulk of the suspects last year and of the gangs who have been a problem in that part of Cologne for much longer.

Look, I am not arguing that an attempt to tell a North African from a Middle Easterner by looks isn’t going to have a pretty substantial error rate. But the stereotypical look is different enough that you can convince a cop that it’ll do.

Look, I am not arguing that an attempt to tell a North African from a Middle Easterner by looks isn’t going to have a pretty substantial error rate. But the stereotypical look is different enough that you can convince a cop that it’ll do.

You may convince a cop that it’ll do, but that doesn’t mean that it is
a)productive and
b) legal.

To a), Northern Africans are a tiny part of foreigners in Germany, and among the refugees coming over the last two years. Syrians and Iraqis have been massively more prevalent. So the error rate will not only be substantial, you will have massively more non-North Africans among those held than actual North Africans.

To b)Article 3/3 of the German Constitution states “No person shall be favoured or disfavoured because of sex, parentage, race, language, homeland and origin, faith, or religious or political opinions. No person shall be disfavoured because of disability.” We’re not talking about an issue of “political correctness”, but rather whether the whole thing was constitutional.

I am not sure what you are trying to argue with me.

Probably because it’s the internet and they are avoiding other work?