While more than half of US Governors have declined the refugees, it is worth noting that EVERY SINGLE ONE OF THEM is a Republican. This is not a Governor thing, but a GOP thing.

Republicans are evil. Worse is knowing that some high priest of evil somewhere is calling the shots for the party. Sick puppy that one.

So did guy connected to refugee passport use fake fingers or what considering greeks had his fingerprints when he came in as refugee? man was identified and fingerprinted

this is an internal threat

is an issue of internal domestic security

I’m probably too cynical and pessimistic, but I see a pattern here. France has a horrible track record for laws diminishing rights of the general public and the announced changes after the attacks are even worse.

Within the next few months Mogherini and the rest of the EU commission will introduce regulations destroying the remainders of an open society - because of home-grown terrorism.

Despite the rumors that tricked more than half the state governors in the USA into enacting racist anti-Syrian policies, there is no evidence that the Paris attackers came from outside the EU.

No shit. Color me UTTERLY UNSURPRISED.

Stupid people seek simple answers, therefore your GOP Reich Wingers in the US will scoff at this news and take the “low road” of blaming the Refugees.

PS. Just in time for the yearly Jesus fest Christmas.

Oh man, I’m with you. Kinda like how the christian religion has been hijacked by racist, war mongering, hate spewing, kill em all types and people are waiting for good Christians to stand up and put a stop to it.

I’ve been a registered Republican since I was 18.

Glad you’re here to let me know where I stand, I guess? 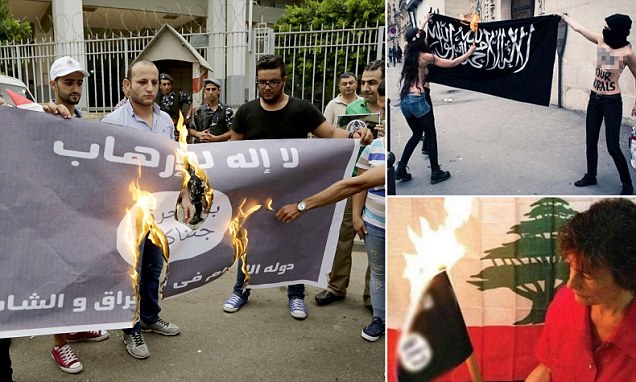 Dozens of pictures and videos are trending on Twitter and YouTube showing campaigners from America to Lebanon setting fire to the black jihadist standard. Former: The Free Syrian Army (Arabic: الجيش السوري الحر‎, translit. al-Jaysh as-Sūrī al-Ḥurr; abbreviated FSA) is a loose faction in the Syrian Civil War founded on 29 July 2011 by officers of the Syrian Armed Forces who said their goal was to bring down the government of Bashar al-Assad. A formal organization at its founding, its structure gradually dissipated by late 2012, and the FSA identity has since been used by various opposition groups. In late 2011, it was considered the main Syrian ...

Given the speed and apparent ease with which the Islamic State of Iraq and Syria (ISIS) forces have captured territory and military and financial assets in Iraq, it will come as no surprise that U.S. military officials and other experts don't think... Islamic State of Iraq and the Levant | Islamic criticism

Around the world, Islamic religious leaders have overwhelmingly condemned ISIL's ideology and actions, arguing that the group has strayed from the path of true Islam and that its actions do not reflect the religion's real teachings or virtues. Extremism within Islam goes back to the 7th century, to the Khawarijes. From their essentially political position, the Kharijites developed extreme doctrines which set them apart from both mainstream Sunni and Shia Muslims. They were particularly noted for...

And they want to test for this kind of behavior. WTF? What they REALLY mean is for all citizens, immigrants or not, to be tested for proof of so-called christianity. To Republicans it seems then and only then will America be righteous and pure.

So the victims blame themselves? Perhaps they will ban all EU citizens from the EU in the name of safety.

wasn’t talking about christians but whatever floats that boat.

I’m still waiting for the Muslim community as a whole

Of course you can “Read honey” right?
As far as I know, roughly 25% of the worlds population are followers and that a tad more than the links you provided “Honey”

The Daily Mail span this as “The Syrian passports to terror: EIGHT migrants have got into Europe with same papers as those found on stadium suicide bomber”.

So did guy connected to refugee passport use fake fingers or what considering greeks had his fingerprints when he came in as refugee? man was identified and fingerprinted

Last I checked all they had was a passport of nobody in particular.

Of course you can “Read honey” right?As far as I know, roughly 25% of the worlds population are followers and that a tad more than the links you provided “Honey”

Somehow I knew you’d find some way to discount any and all information that doesn’t fit your conception of the current situation. I hate to break it to you, but ISIS is more likely to kill you if you’re a Muslim in the region than if you’re some random Joe Schmoe in France. People in region don’t feel the need to express the obviousness of that fact. The death toll in Paris pales in comparison to what ISIS has been doing to people in the region.

Meanwhile, the bulk of ISIS is pretty geographically limited, and people are understandably reticent to commit to a ground offensive in the area considering the previous “success” of the most powerful army in the world.

This should surprise nobody: why on earth would you assume that the people conducting this did not know their way around Paris? It would be rather difficult to do this as a just off the boat migrant from Syria.

Not everyone was local to Paris, but surely there was significant local knowledge.

The migrant issue was always a non-sequitur on this. Germany takes migrants because it needs them. Not everyone does (though much of central and eastern Europe could benefit from immigration).

As for the silliness from the Grim Reaper above: perhaps no white Westerner should be allowed post anything on the internet without apologising for, and rejecting the detournement of western values by, the incessant imperialist bombing, murder, torture, theft, etc. of mostly Muslim countries before they say anything else? It is not the job of most Muslims to apologise for c.10 people who are also muslim.