Austin cops violently crack down on scourge of anonymous jaywalking

that is just freaking ridiculous. of course given how hard it is to even discipline a cop for killing an unarmed bystander in this country there probably won’t be any consequences to their stupidity.

Probably not. But they ARE keeping Austin weird. Not the original intent of the phrase, but still true to its word.

Crime is so fucking out of control, it’s insane. Very glad to see another criminal get put away. CRIME DOES NOT PAY.

Cue police apologists chiming in, saying they’re only doing their job. Which is demanding and thankless, etc.

But seriously, what kind of arsehole decides this sort of shit is okay? This is plainly evidence in favour of anarchy.

Anyway, Austonians (what’s the collective noun for folks who live in Austin?) who feel this unjustified strongarm bullshit is beyond the pale should organise some mass-jaywalking protest.

Leave the ID at home, and rock a Fawkes mask instead (maybe enlarge the eye holes first).

Fucking police state. Feel the boot on your face, dammit.

I was under the impression that police may require you to identify yourself following an arrest, but that’s not necessarily synonymous with “provide an ID card.” So long as you tell them your name and address, isn’t that considered sufficient?

I mean for crying out loud, a driver’s license is just that - not a pedestrian license.

I’m surprised they caught her, they look like they’ve been pounding down some donuts. 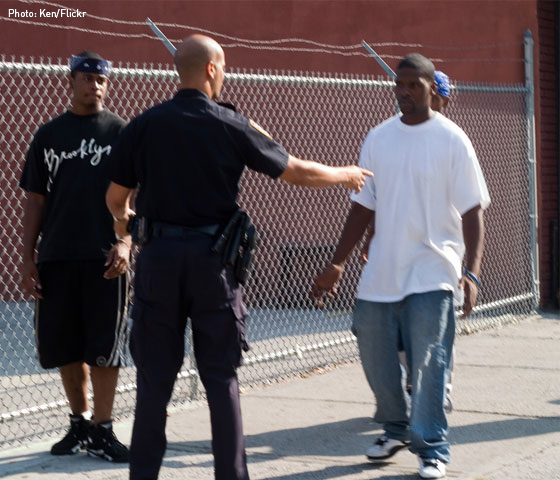 What To Do If You're Stopped By Police, Immigration Agents or the FBI

We rely on the police to keep us safe and treat us all fairly, regardless of race, ethnicity, national origin or religion. This card provides tips for interacting with police and understanding your rights.This information is not intended as legal...

The college town I live near by is very busy with mixed traffic: foot, bike, cars, shoppers, tourists, the inebriated, busy folks, and joggers. It’s not common, but pedestrians do get killed in this situation, and jaywalking is a problem worth police enforcement.
Additionally, the witness stated the woman tried to get away from him? I don’t care what the situation is, a cop is not going to like you running away from them.

Personally, I know it is a huge hassle, but when I leave to excercise I always carry an ID, sometimes a few dollars, and sometimes my phone… because well, there you go.

I wish it would have been different, but it is what it is.

Anyway, Austonians (what’s the collective noun for folks who live in Austin?)

A bizarre of Austinites?

It’s true, don’t run from the police. It generally puts them in a foul mood. Be cooperative. Generally puts them in a reasonable mood (not always!) Don’t be a prick. Try to sweet-talk them a bit. Ask if they’re willing to let you off with a warning, and that you understand the mistake you made and won’t do it again. All of this is not only not that difficult, I would think it would be pretty common sense. Kind of get the sense that this woman may have done the opposite, basically, of all of this. They still likely overreacted a bit. However, the lady does seem to kind of be acting like a, well, screaming idiot baby.

What I want to know is this. How did the fat fucks catch her?

If a bunch of armed dudes grabbed me out of no where and tried to haul me off to an unknown location, I might scream a bit, too.

I have a similar story…
I was working at a bar on 6th street one summer (Joes Generic) in … '98 I think? If you’ve been there, you know they cordon off the street on the summer weekends, as it fills with a couple thousand drunks both Friday and Saturday.
I was getting off work one eve, and skateboarded across the (mostly empty) street to go to a different bar for a beer. Id was stopped by a police officer, who menacingly told me that I could not skate here. I asked him if he meant the sidewalk, which would have been acceptable enough, but he said “No, on the street. Anywhere. You can’t skateboard in Texas.”
I pointed out that the street was completely free of autos, and people too at this point, wherein he exclaimed “Are you giving me lip?!?”, and proceeded to arrest me. (There may have been a few other words exchanged, but they were more of the same, and polite enough from me, I knew better at this point in my '20s than to antagonize an officer without good cause.) He threw me into the back of his van, and drove me to the station for booking, while completely ignoring my pleas for an explanation, a charge.
When we get there and I’m being searched for all things interesting, he finally acknowledged my questions (presence of other officers?), and says he’s booking me for “drunk and disorderly”. I insist that I was stone sober, and he should test me. He explains that “this is Texas, and I don’t have to test you. If I say you are, you are.”
At this point I became willfully indignant. I mockingly mentioned that if he needed a real charge there was a pipe in my backpack with a little resin in it. He enthusiastically complied.

I would like to be able to say that it got more interesting, that i was somehow dignified in defeat. But in all truth I only got more verbose, culminating in my evening spent naked in the rubber-room, designated for the likely to hurt themselves type.

Morning shift came, and the ward nurse noticed me, “Um… You shouldn’t be in there… Hold on…”, and gets me out in time for arraignment. The “pipe in my bag” story got a chuckle from everyone in the court, including the judge. I was told to return at such n such a date, but i skipped town back to SF. Maybe I have a warrant…

Glory to Austin doesn’t have the same ring, but at least it’s easier to pronounce.

Got to keep those numbers up if you’re ever going to make Sergeant. Fuck them.

I think you’re generally expected to have a state-issued identification card if you don’t have a driver’s license.