Tests and ratings games related to social status were a prominent part of Internet geek culture going back to the Usenet days. Most of them were rigged to affirm the innate superiority of introverted white male techies and Libertarians and proto-incels who tried to make everything about the numbers. Pargin makes a strong case that HotorNot was the site that took the concept into the mainstream, to everyone’s great misfortune.

It’s not a bad take. My understanding is that sites like Youtube or Facebook or Reddit all attached the ratings system as a way to ensure the ‘quality’ content is what everyone was seeing while the less good stuff would quickly disappear into the bowels of the site. Even that hellhole 4chan used a similar system where so long as people were replying to a post it’d keep recycling to the top of the page. The thing is, I’m not sure there’s a better way to automatically curate content and because there’s so much of it being produced I don’t think there’s an efficient way to do it manually.

I had at least one photo on there. I know I had one skiing. I think I got like a 7, which ain’t bad.

Even with the mask on? Good job, bro!

Fortunately it was easy to restore. You can do anything with Zombocom!

An example of the application, but maybe not proving the point?

This site feels more like a content-driven and human-moderated than the “open market on likes” one gets at the shittier sites on this timeline. The likes are fun, but not the point. I think. That, or I’ve joined a cult and haven’t noticed.

Pargin makes a strong case that HotorNot was the site that took the concept into the mainstream, to everyone’s great misfortune.

I think this was the fuel, and putting a decent screen and cpu in everyone’s pocket was the match.

As far as I’ve seen, the Likes don’t feed any algorithm in Discourse beyond counters and notifications when certain thresholds are passed. They’re not upvotes since comments aren’t pushed to the top or highlighted in any special way because of them. They don’t drive the user trust levels as far as I know. In aggregate they may inform a human moderator’s decision regarding a user’s disposition, but beyond that they’re basically nice pats on the back from the community to the user.

The BBS would still function without Likes. It becomes clear to users quickly that if they’re here for the Likes they’re in the wrong place.

Fortunately it was easy to restore. You can do anything with Zombocom!

Zombocom died in the flash fire, but somebody ported it over to html5

As far as I’ve seen, the Likes don’t feed any algorithm in Discourse beyond counters and notifications when certain thresholds are passed. […] They don’t drive the user trust levels as far as I know. […]

I think they do figure in to the user trust levels, IIUC from this (and if I’m also understanding your comment correctly

The user trust system is a fundamental cornerstone of Discourse. Trust levels are a way of… 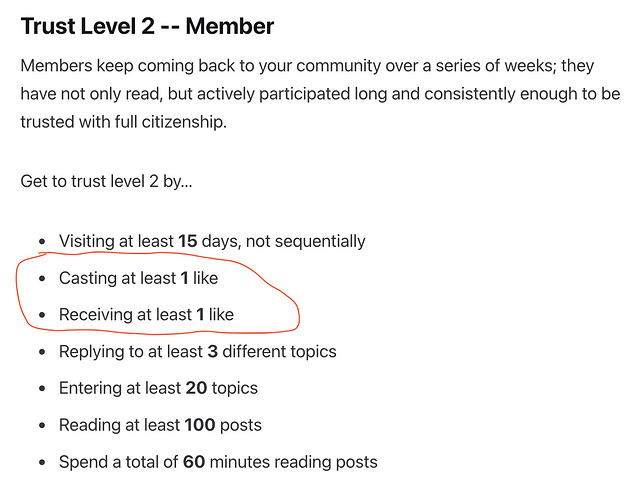 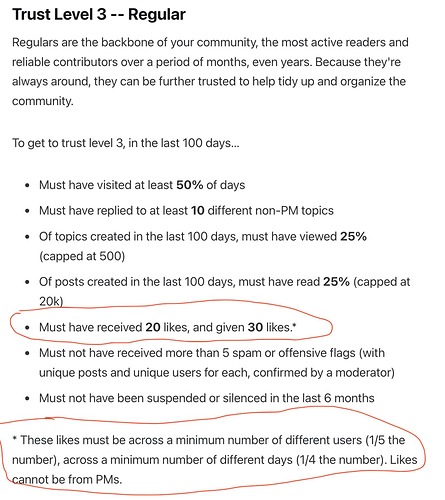 Um,have you read the moderation thread? it’s full of moderation decisions against people who score high, for which the moderator is ritually thanked.

Yes, and? (I’m not sure what you’re getting at. I don’t think what you’re saying contradicts the info from that link…or is that not what you meant.)

The BBS here is purported to be a place of high quality posts that add to discussion, and are always nine characters or more in length. I figured the philosophy of the “like” here was to give users an outlet for the need to respond “lol,” “ikr,” “congrats,” “it me,” etc.

Giving a like is probably necessary to Member status just to show you know how the function works. Not sure the reasoning for Regular status, but most of those criteria elude me anyhow.

Thanks. I didn’t know that!

I’d be interested to hear from the Discourse devs (ETA calling @codinghorror)about the decision to include Likes as a TL criteria in the context of the larger discussion. Although @Bunbain’s speculation makes a lot of sense in terms of how the BB instance runs in practise.

I suppose that Likes would provide some indication that the receiver is actually adding value, and not just visiting a lot, reading a lot, and posting a lot without getting flagged too much?

I’m not sure Likes area good way of measuring added value to the forum. Engagement with other users, perhaps, but value comes from the actual quality of the comments and their ability to drive the Topic forward into interesting and productive and educational [ETA: and funny!] directions.