You are a Clothing Criminal, and you belong in Fashion Jail!

So he basically copied (not that it’s wrong to copy, this seems to be a great thing to copy) what Nils Pickert did two years ago, only he still wears a jeans with a flowery shirt. 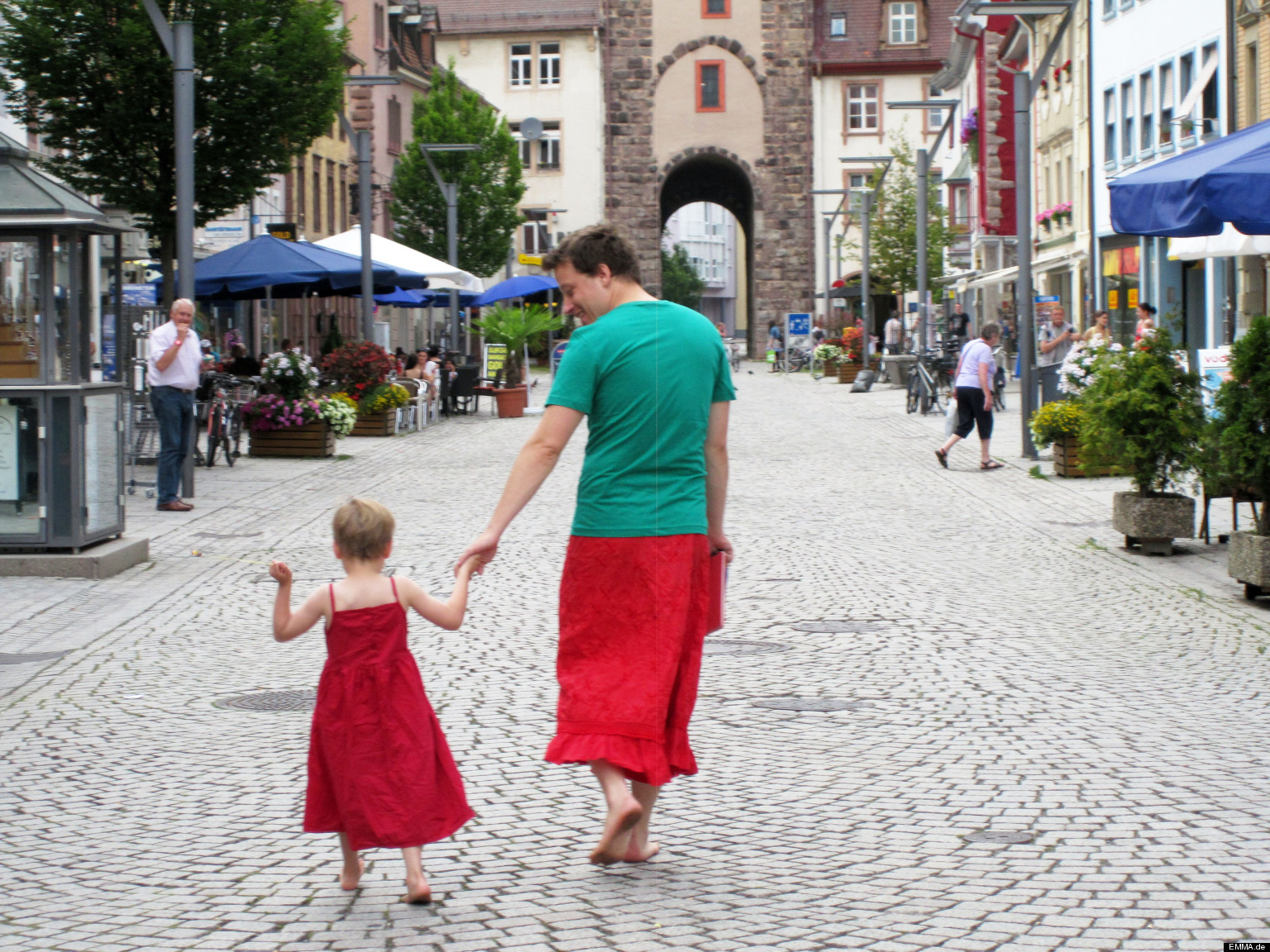 LOOK: Supportive Dad Walks The Walk -- In A Skirt

When it comes to supporting his son's unconventional wardrobe, Nils Pickert talks the talk and walks the walk. The German dad

My sister used to work in a kids clothing store and she saw a lot of little boys screaming for pink clothes. It wasn’t even dresses, just pink shirts, and their parents would fight to the end over it. Some parents even asked if there were pink “boys” clothes. They could handle the pink if only it didn’t have barbie or my little pony or another “girl” theme. Of course they don’t make five t-shirts with manly themes for five-year-olds.

I find the whole situation so embarrassing. How can people care about this?

I think they would all three look much better in robes and pointy hats.

My uncle used to wear dresses when he was a kid back on the farm in northern Alabama in the 1940s. Even after he started school, when he got home he would take off his school clothes and put on one of my mom’s old dresses. I asked my grandma about it, and she said, “well, he just liked to wear dresses is the thing. I guess he kept on with that until he was about eight or nine.” I always loved how she thought that was just one of those things kids do, and it always made me suspect that the past was a lot weirder than we give it credit for.

I always loved how she thought that was just one of those things kids do, and it always made me suspect that the past was a lot weirder than we give it credit for.

As a historian, I can tell you with complete honesty and certainty that the past is absolutely strange and bizarre, when not outright surreal.

Sometimes it’s astonishingly familiar, and other times it’s jarringly foreign and alien, but I guarantee you’ll never run out of things to be surprised and amazed by in studying the past.

I would be totally fine if my son wanted to wear a dress. Especially when he was 2, and still in diapers, because it is SO MUCH EASIER changing diapers with dresses. But even if he wanted to do it now, at 5, I would have no problem with it. Because who cares? And anybody who teased him for it would have to answer to me. I would totally punch a 5 year old if they were being a dick.*

Parents should be happy to do “embarrassing” things in public to make their kids happy. I do it all the time.

* I would not really punch a 5 year old.

Totally would*, and explain why he was getting punched. I’d hope to ignite enlightenment and compassion but would settle for the little turd not being so quick to run his damned mouth.

I used to carry a purse around when I was 2-4ish. I grew out of it.

… I would, however, consider ditching the binky.

more people need to be copying these people.

My son was always a very rough and tumble boy-boy. But for years, he would go to the nail place with my wife and get his toenails painted silver or gunmetal gray just like her. When he was 10 or so he had shoulder length hair and insanely had people talk about him looking like a girl. His grandfather was teased about his collar length “girly hair” when he was in college in 1962. Who is still wanting to fight battles that were won 50 years ago?

I dunno if 2yolds really get it about gender. When my son was 4 he wanted to be Sailor Moon for halloween - but a year later, girls were icky. Now he’s a teen and back to experimenting.

It’s only been the past 100 - 150 years that this was not completely normal behavior. Breeching was the occasion when a small boy was first dressed in breeches or trousers. From the mid-16th century until the late 19th or early 20th century, young boys in the Western world were unbreeched and wore gowns or dresses until an age that varied between two and eight. Various forms of relatively subtle differences usually enabled others to tell little boys from little girls, in codes that modern art historians are able to understand. Breeching was an important rite of passage in the life...

It gets even worse when you realize that if you go back far enough (but not even that far really) in Western history, it used to be that pink was sometimes preferred for boys and blue was the preferred choice for girls. At other times, the colors were related to hair or eye color. It’s not that long ago because it wasn’t until cheap, permanent synthetic dyes were developed that any association was developed.

Smithsonian.com wrote an article on this subject. Here’s a quote:

For example, a June 1918 article from the trade publication Earnshaw’s Infants’ Department said, “The generally accepted rule is pink for the boys, and blue for the girls. The reason is that pink, being a more decided and stronger color, is more suitable for the boy, while blue, which is more delicate and dainty, is prettier for the girl.” Other sources said blue was flattering for blonds, pink for brunettes; or blue was for blue-eyed babies, pink for brown-eyed babies, according to Paoletti.

What we’re seeing now is “gender marketing”. It’s a way for merchandisers to ensure that they can increase their profits. The Checkout, a “Consumer Reports”-style show from Australia, did a particularly good segment on the subject in their second season.

You will forevermore be “Tinky Winky” in my mind, now!