Nope, at this point I assume every one of these is staged.

So they walked straight past the sign that says “one person at-a-time only”. You can just see it in the right just when the video cuts to them walking onto the bridge.

It looks to me like it says 10 something-or-other, which is in line with the on-screen text. 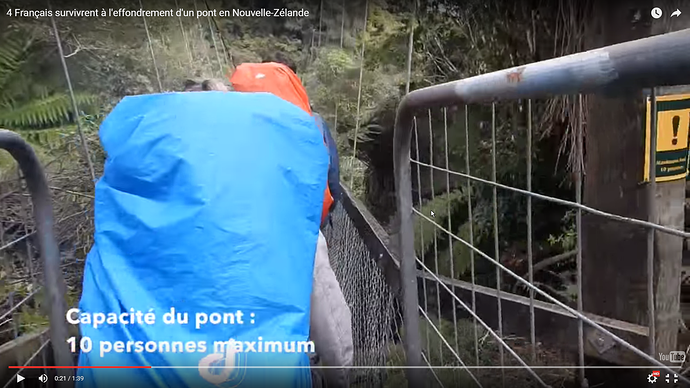 The sign says no more than 10 persons at once, and they even mentioned it on subtitles…

(Whatever the French words for holy shit are…) Good morning!

Shocking video has emerged of the moment a group of French tourists plunged into the river below.

“Highly unusual manufacturing defect” in link of a chain is to blame.

That’s why you are supposed to break strides when crossing bridges. Even though it says max capacity of 10, they each had a heavy looking pack.

The issue with a suspension bridge and multiple people on it is always about the “shake” Normally when hiking across these you certainly go only 2-3 at most if not only 1 at a time!!! Also, you don’t plod across like normally, you shuffle very smoothly and hold onto the rails tightly. You want your steps and weight to distribute naturally with the bridge’s own movement.

These fools appear to just stomp across like its just part of the trail and business as usual.

I was trying to figure out if they broke step when on the bridge. As they discovered with that footbridge in London, sometimes the bridge will have a natural resonance that will tend to synchronize people’s gait and that can be a bad thing…

Whatever the French words for holy shit are…

I’d go for sacre merde, but the tuned down idiom is probably “sacrebleu”.

They didn’t fall off, they were bucked off.

To the .gif thread you go!

The hiking tracks of New Zealand popular outdoor tourist locations for people from around the world and they have no entry restrictions. It is not reasonable to expect all hikers to know the proper way to cross a suspension bridge. As this was a well constructed bridge and the 10 hiker limit signs indicate that some WLL engineering calculations had been done it is reasonable to conclude that the hikers acted appropriately.

Since we know (from an above link) that this was a failure of part of the structure the hikers shouldn’t be subjected to victim blaming.

A good example of why all non redundant rigging links in life safety systems should be proof tested.

What?!
Are you some sort of professional hiker? This isn’t mountain climbing, it’s a walk in the woods. I’m going to say that there are more people that would start jumping up and down on it to scare their friends. Break strides? They are crossing a creek, not calling a sandworm.