This is why I stay indoors.

I hiked the Milford Track in NZ, and used many bridges just like this one. We obeyed all the maximum load signs, but I also bounced the bridges as I walked across. It was fun. Walking with a set rhythm and stepping extra hard. Getting the thing bouncing a bit was a blast.

This is nothing like the movies! In the movies (and in my mind) you’d reach out and grab something to save yourself.

The reality is you’d be falling before you knew what even happened.

Another fear to add to the ever growing list…

I learned a new word: “The department has briefed the French trampers on the findings of the bridge investigation.”

Trampers, from Wikipedia: Tramping, known elsewhere as backpacking, rambling, hill walking or bushwalking, is a popular activity in New Zealand.

“Highly unusual manufacturing defect” in link of a chain is to blame.

News for the plebes. I followed the link, hoping for microphotographs, a metallurgist talking about the root cause… and got a single sentence that tells me Absolutely Nothing.

But if it’s on the internet it must be true.

The “highly unusual manufacturing defect” part is likely true or at least quite true.

I for one would however prefer somewhat more details. Was it corrosion? If so, stress-cracking, crevice, or pitting? Inclusion of a slag particle in the metal? Fatigue crack? So many fascinating possibilities!

No, they want to talk about backpacking instead.

10 at once but don’t march in step on bridges.

“My other backpack is a steadycam!”

It’s probably a scam they pull on the tourists. Yes, yes… the old inverting bridge ploy! There is probably a table set up off frame where they are selling towels with uncompetitive pricing.

This is basically every morning.

Cool prank! Now do it with cars.

Since when do recreational trekkers ever march in step? These aren’t soldiers, and nobody’s calling cadence.

And thanks, guys, for giving my wife further nightmare fodder. She was disturbed enough by my pictures of wilderness-area bridges already. 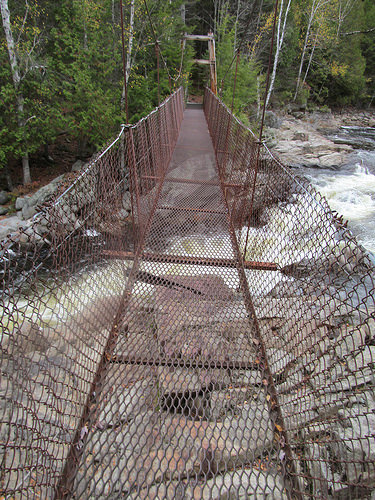 The camera guy and the two directly in front were walking in step when the bridge failed. You can see the 2 packs and the camera-view bouncing in sync. But the bridge should be strong enough to support the maximum number, in step and with a significant safety factor. Bridge’s fault, not the hikers’.