Bagpipes improve nothing. There, I said it.

And yet in Scotland, bagpipes and police involvement improve the mood and bring about peaceful de-escalation.

Police officers with bagpipes are the Scottish SWAT teams? 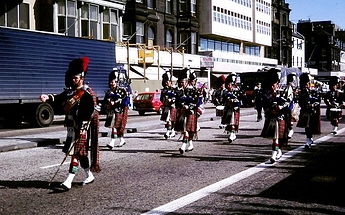 Of course - here you see the bagpiper laying down a suppressing skirl while the vehicle makes a flanking manoeuvre.

Don’t know why, but I’ve always found bagpipes (and fife & drum) to be quite soothing.

I’m actually not too opposed to bagpipes, either. As long as they’re outside of their traditional element, martial music.

A friend of mine told me the Romans had a musical instrument similar to the bagpipes and suggested that they were all shipped to Hadrian while he was up there building that wall to get rid of them. The natives mistook them for something valuable.

I’ve found that a tuba is better for drowning out nutters.

Bagpipes are awesome. Well, if correctly played, if not is like strangling several cats at the same time.

You know why Bagpipers always are marching when they play. . .
They’re trying to get away from the music.

Two negatives DO make a positive!

I went to a pipe and drum corps concert once. It was strangely soothing, even indoors.

I guess I’m in the minority who loves bagpipes. It’s probably the drone. I once hired a bagpiper to kick off a music festival I ran; half the audience freaked out and covered their ears, and the other half cheered and danced.

Sure I think he’s Australian and not even that good…but he’s got flaming bag pipes, and that’s worth a lot.

I’ll see you and raise you this – Darth Vader with kilt riding unicycle with flaming bagpipes.

I honestly think early indoctrination is necessary for enjoyment of the pipes.

And even then, it’s more of a physical reaction than true appreciation of the drone.

Literally I get goose-flesh, the chills and an adrenaline surge when I hear them, especially when I’m outside of Scotland and haven’t been home for a while.

Is there only that one song available to bagpipe players?