I listen to Pipeline from BBC Radio Scottland weekly.

But perhaps you don’t care for Highland pipes. What about Northumbrian Small pipes playing Bach?

Or perhaps some Uillean pipes as played by Mr. Maloney. (Who ironically did the theme for braveheart. Try to work that one out)

But I bet you can enjoy some solid highland pipes as well.

Mike Katz is so fucking amazing it makes my teeth hurt. And that is the first time I’ve ever seen him not in a Hawaiian shirt.

Hope our wonderful American friends will forgive me mentioning that you may also notice here the difference between Scottish Police and their American counterparts…The power of one beckoning finger!

100 watt Marshall will do the job also.

They’re all a bit Northern, though… how about Italian bagpipes?

Macedonian ones with most of a goat still attached?

Hate to say it, but I actually prefer the hurdy-gurdy.

…my band has one. But our gurdy-foo is currently weak.

I saw Zirp a couple weekends ago and that guy did things to his gurdy I thought were illegal.

Traditional German tunes, a bunch of ‘woo’ tunes, and I think some Galician.

Our gurdy was built by Jim Carpenter, who is a renaissance man if there ever was one. 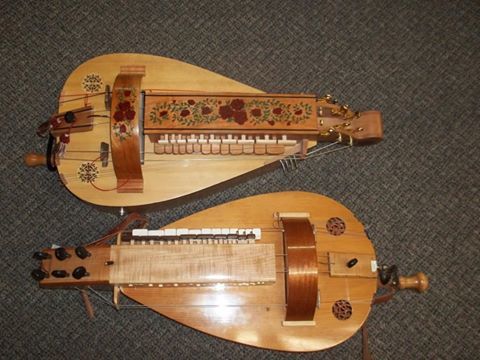 our gurdy-foo is currently weak

Don’t know if it helps, but back in the day, when hardly anyone in the UK had access to hurdy-gurdy teachers, a lot of people learnt from the Musketts’ method.

that guy did things to his gurdy I thought were illegal.

I saw Gregory Jolivet play a few years ago, and was astounded by what he can do:

Screechy windbag drowned out by bagpipe

I take it back, I do appreciate the drone.

Okay, I just sent that to all the members of my group. Seals it, our fiddle player Black Meg is getting a damn Hardanger and I’ll start putting serious time into the gurdy.

Hey, for the not-faint-of-heart, play ALL FOUR VIDS at the same time at high volume.

The one that goes ‘BLEEEEEEEEEEEEEEEEE SKR DEEEEEEEEE BLDEEEEEEEE BDEEEEEEEEEEEEEEEEEEEEEE’ forever? Yeah. We’ve got Northumbrian pipes, which are quieter, I’ll give them that. They also seem to require far more preparation to play; there’s a guy busks with them in town who my girlfriend kinda knows, and he’s always buggering about with little spirals of cardboard to stuff in them before he does the thing, for some reason. Possibly that’s why they’re quieter, and it’s the equivalent of using a potato or a pop bottle as a suppressor on a pistol, I dunno.

I will trade your pipers for our emo singer songwriters. We got a deal?

I live just past where Hadrian faltered, and built a wall and said, ‘Enough’. Bring them, and we will mock them for their wearing of coats in the Dark Seasons, and singing of their ‘feelings’. Please though, take the pipers.

Is there only that one song available to bagpipe players?

The other songs managed to run away…

I have initiated shenanigans near said wall. Well, only a couple parts of it. (Housesteads shenanigans may have involved alcohol).

But its a deal. I’ll get Obama, Sturgeon, and Corbyn on the phone.

(Seriously, Salmond to Sturgeon? The fish puns up there write themselves)