Just for the record: that doesn’t work in the slightest.

I mean, it does work, but only during the “total” part of the total solar eclipse. The rest of the time you need to view it through an ISO 12312-2 filter.

We have a big 11" sun filter from our telescope.

or, you could just look at it indirectly.I was in Santa Fe during the last eclipse, and there was a guy with a shaded telescope. Cool looking, but honestly not all that impressive.

Then we walked by a building with a large cottonwood tree near it. One sliver of light was a bit “meh”. Thousands of them projected onto a building was stunning. Looked a bit like this:

Is looking at an eclipsed sun more dangerous than looking at a non-eclipsed one? I mean, you can look at the sun for a short while without permanently damaging your eyes but to hear my gradeschool teacher tell it (when last I was around for a total eclipse), your eyes will be instantly burned to a crisp if you look at an eclipse.

Fully exposed and developed black and white film is safe, color negative film, however, is totally unsafe, regardless of how dark it might seem. The film has to contain real silver particles, not color dyes.

“not older than three years” Wait, I was planning to reuse these in 2024.

you will be blind well before then…

Cool. I’ve done a partial eclipse view with a magnifying glass on concrete.

Bit disappointed in BB no one has posted this yet.

Or you can just reflect the sun onto a shaded surface with a small mirror.

Or project the image. This is a bit of sophisticated astronomical gear thrown together when I realized at the last minute that the 2012 transit of Venus was the last one I would ever see. Construction time approx. 5 minutes, mostly scrounging through the scrap bin.

The binoculars (with one lens covered with foil) project an image of the sun onto the white paper. The result looked like this - the little black dot on the solar disc is Venus.

You can get fancier, and get a brighter image, by enclosing the setup in a light shield, for example a cardboard box that you stick your head into.

This is not as impressive as looking directly through glasses, but it’s safe for the kids, and you will still have eyes afterwards.

“not older than three years” Wait, I was planning to reuse these in 2024.

The 3-year expiration date is a just a myth perpetuated by Big Solar Eclipse Accessories to get you to buy new stuff, when what you have will still work just fine.

There was an annular solar eclipse that passed over Atlanta in the early 1990s. I dragged my coworkers outside with an empty Kleenex box with a pinhole (then multiple pinholes for more fun) in it to view the sun being eaten.

But the coolest thing was seeing a pattern similar to your photo here of sunlight through some small trees in the parking lot. It came as a beautiful surprise to all of us. 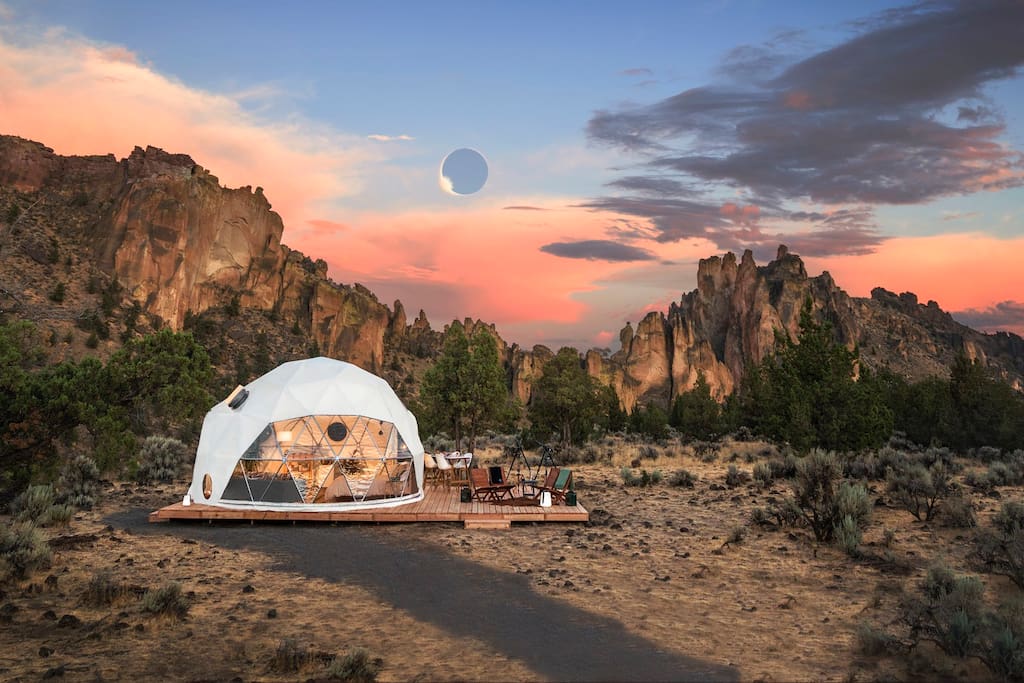 House in Terrebonne, United States. Experience the August 21 solar eclipse in the most inspiring way imaginable. You’ll prepare for the phenomenon with a night of stargazing in a geodesic dome in the Oregon wilderness, joined by a noted...