Behind the scenes shot of Empire Strikes Back opening crawl

George is awfully proud of that exposition dump. In most movies it would be considered a sin, but because Star Wars did it in an iconic way we’re going to forgive it I guess.

What always stabs me in the eye is the terrible spacing of the first line of the Empire crawl. I wouldn’t want to hyphenate “Rebellion,” but that degree of inter-word justification is jarringly awful and also messes with the perspective effect as it recedes. Surely George could have done a minor rewrite to avoid this crime against typography.

It’s really interesting to see how they filmed the crawl. What’s the source of the image? I didn’t see it in the Wikipedia article.

I saw something where he was comparing what happened in the trilogy with something in Episode 1 and how they related to one another - “So they sort of rhyme, like poetry.”

I don’t think he knows what poetry is.

“you have to be careful that you’re not using too many words that people don’t understand” .
And thus was born Up-Goer 5.

Wasn’t this one of the pictures that Peter Mayhew posted on his Twitter a few weeks back? 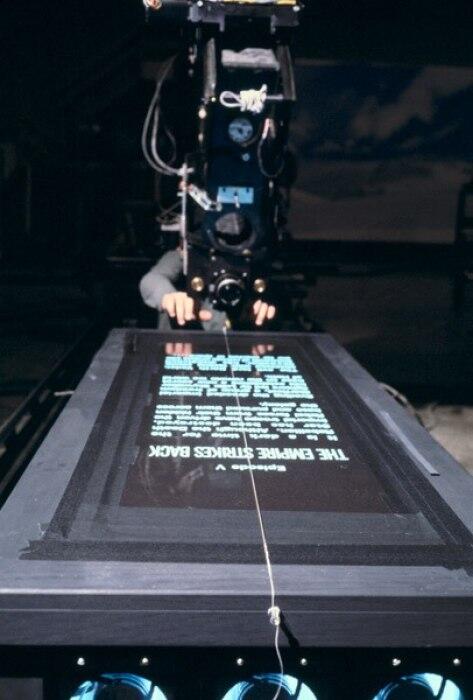 Yes, thanks! Sorry, the source got dropped. Added it back.

Haha, this reminds me of a credits crawl a friend and I did. In 86 we were doing a video for our High School econ class and we made a crawl by writing the credits on saran wrap with liquid paper, put it against the green felt of the pool table, and taped pulling the wrap down. Good times.

I once had to shoot a no-edit film, just stop-start on the camera. I Really wanted credits though, so I just queued up Secret Agent man on an audio file (that was the name of the film, it was hilarious, especially the product placement) and had words scroll up my computer monitor. Worked out well actually.

Particularly in the first Star Wars, the crawl actually kind of neat because the exposition gave the sense that there was an ongoing series that you were just getting a glimpse of for the first time and that the exposition wasn’t just lazy storytelling but the equivalent of those “Previously on…” intros on TV shows.

Yeah - I think they have the clip in one.

If you love Star Wars and have a dark sense of humor, one must watch the prequel reviews by Red Letter Media.