Well worth the time to read: 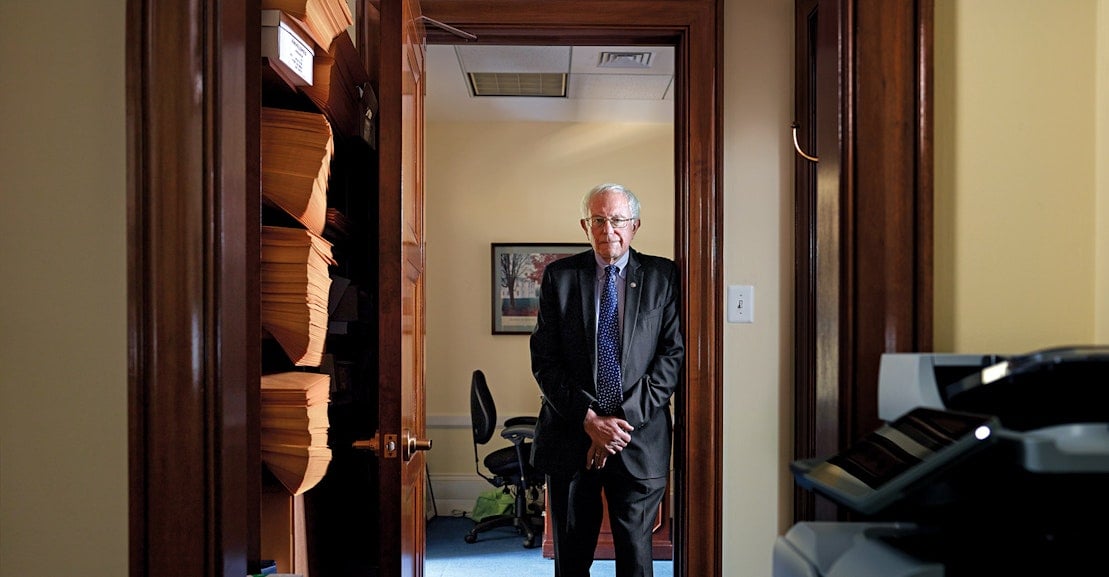 In an in-depth interview, Sanders offers a candid and passionate assessment of Trump, Clinton, and the future of his movement.

I was annoyed by the interviewer, but Bernie was spot on.

I didn’t like the opening comparing Sanders to a homeless person he knew… But I thought the questions were fair. What annoyed you particularly?

Constantly bringing up false or irrelevant claims that Sanders supporters are disruptive, mentioning that Eugene V Debs, a Socialist, was Sanders’ hero without mentioning who Debs was or providing a drop of context, etc.

Comparing Bernie Sanders to a probably deranged, possibly homeless guy is beyond irritating. It’s like it doesn’t matter if Bernie’s right on the issues, because he’s not telegenic, doesn’t have that fake CNN neutrality, points with the wrong finger, etc.

Constantly bringing up false or irrelevant claims that Sanders supporters are disruptive, mentioning that Eugene V Debs, a Socialist, was Sanders’ hero without mentioning who Debs was or providing a drop of context, etc.

I think that it made for a more challenging interview, but it allowed Sanders to effectively counter these claims or erroneous ideas that were built up around Sanders, though, right? it did allow him to set the record straight. The only answer that Sanders gave that I found unsatisfying was the direct question on racism, but even there, Sanders was able to illustrate his views on racism and class by talking directly to MLKs post-civil rights act works.

Comparing Bernie Sanders to a probably deranged, possibly homeless guy is beyond irritating. It’s like it doesn’t matter if Bernie’s right on the issues, because he’s not telegenic, doesn’t have that fake CNN neutrality, points with the wrong finger, etc.

I felt this was the worst part, precisely because it didn’t give Sanders a chance to answer the media perceptions of him head on.

Overall, I think Sanders was able to speak against lots of the wrong perceptions, though, no matter how the interviewer attempted to frame it.

I think the questioning about his so called disruptive supporters is not fair. Sure, some of his supporters are disruptive, and so are some of Hillary Clinton’s. He’s not the boss of everyone who supports him, and it’s not fair to ask him to be. Also, if you define disruptive as booing Hillary during the convention, then that’s a really weaksauce definition of disruptive. Some people who said they were fans of his and not of hers booed her once. Yawn. I think the interviewer was also sniffing around the alleged chair throwing incident, but that was proven to be false.

I agree that it was an unfair question. But I think he handled the question well. I don’t think that every interview has to treat their subjects with kid gloves. A challenging interview can also be helpful to the subject, because it allows them to directly address issues.

It’s one thing to ask softball questions. It’s another to ask, “what about your disruptive supporters? They’re seriously disruptive, aren’t they?” These questions are silly, and he’s answered them enough for anyone who really cares about the answer. Nagging questions about a non-issue don’t help anyone, but they feed into the false narrative that he’s just like Trump and he has the same supporters.

It’s like those bogus questions he kept getting about communism and Soviet Russia and Cuba. Answering those questions is a waste of effort, because they are beyond irrelevant, and anyone who cares if he’s really a communist* knows he isn’t one. They just stoke doubt in people who don’t care to dig deep. “Bernie’s a communist? Of course he’s a communist, why would they ask him these questions if he’s not a communist?”

*Red baiting is very thinly veiled antisemitism. People who are up in arms about socialism and communism and Marxism don’t really know or care what these things are, they’re just looking for a socially acceptable way to vent their antisemitism. All this socialist communist Marxist crap has more to do with Sanders’ ethnicity than with his belief in Social Democracy, which is a far cry from any of those things.

I felt this was the worst part, precisely because it didn’t give Sanders a chance to answer the media perceptions of him head on.

It will certainly have an impact on the myriads of people who still read the New Republic.

He asserted that red-baiters are antisemites.

This exchange popped out at me:

I’ve spoken with longtime supporters of yours who feel that you lost in part because despite your own record in civil rights, you didn’t seem comfortable talking about race in a way that—

[Interrupting] OK, see, this is an issue I’m not really—what I don’t want to do is get into me.

I’m not raising this to talk about you. I’m interested in hearing your take on racism. Do you see it as primarily a class issue—a by-product of economic injustice? Or is it a separate and distinct problem of its own?

It’s a complicated answer. It’s a good question, but I prefer not to get into it right now. [Stony glare, followed by silence.]

Why does our stuff keep getting eaten?

Also… apparently, I can no longer write… the fuck did I just say?

This topic was automatically closed after 103 days. New replies are no longer allowed.