I see no video clip.

Kinda feel like the best technique to access elected officials for some guerilla lobbying might be to schedule an interview with a film crew from some vaguely sympathetic sounding outlet. Who wants to start canvassing university journalism departments to recruit student videographers?

This seems to be it, more or less:

It looks to me like Bernie saw through it based on his expression. But maybe that’s just me projecting. Sacha needs to work on his (U.S.) Southern accent.

I guess I just don’t find it funny because Bernie is trying to have a serious conversation and quickly realizes this guy is worthless. It’s just funnier when those spineless Republicans not only take the bait but try putting some kind of a spin on it to be agreeable and just go down the rabbit hole of jackassery all in the name of “PR” i guess

All publicity is good publicity.

I don’t see how most of the fooled don’t see the prosthetic work in front of them, to be honest.

They would no longer be the 1%.

Still a moot point, because anyone making over 50k a year would be responding in this manner: 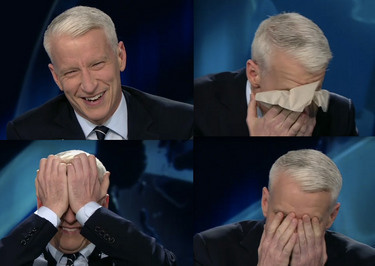 So… Bernie Sanders is more savvy than the average Republican shill; whodathunkit?

honestly, a lot of people are not amused by Sacha Baron Cohen, so there’s that.

Headline seemed to imply Bernie had issued a response upon learning it was Baron Cohen.

Bernie was still making an effort in spite of the (simulated) Trumpanzee level intellect.

<-- I’m a Bernie Sanders supporter and this is hilarious.

It makes me wonder what the rest of the people in his day are like.

Didn’t SBC have this skit back to front? Isn’t his shtick meant to be that that the interviewee is the one making a fool of themselves?

The Yes Men do it better.

Seems like a pretty steep hill to climb if you set out to make palin and walsh look dumber than they are. I really don’t care who SBC goes after cause if they are dumb enough to fall for his stuff they’re too dumb to matter. I kind of liked SBC’s stuff when it was new and fresh but this is just shooting fish in a barrel. Find a new routine…I realize you gotta make a buck but surely you can do better than this.

kind of liked SBC’s stuff when it was new and fresh but this is just shooting fish in a barrel. Find a new routine …

What do you do when you have reached the bottom of the barrel?

Yeah, I thought it was one of the less convincing characters. He should have done a liberal character, similar to what he did with the Republicans.