I… that’s kind of awesome. I seriously love it.

Bernie had to throw it down at you with some rhymes first.

Shatner to run for Canadian PM?

The left has been battling cultural tone deafness for more than a 100 years.

It’s a battle worth winning — now more than ever.

“… Sanders continues to pick up less than 10 percent of black voters’ support. …”

Sanders absolutely needs to earn the votes of African Americans.

That being said, with the exception of the Green candidate, Jill Stein, no one else but Sanders has listened seriously to organizations such as BLM and changed his policy platforms in accordance with their discussions on these issues. Even then, he needs to earn their votes. Most other democrats just expect the black vote, at least Sanders has shown a willingness to engage with the community and work to address their specific issues rather than just assuming talking vaguely about economics will win them over.

The good people at fivethirtyeight.com argue that more — much more — is needed to connect the campaign to African-American voters.

For those of us who support the Senator’s approach to democracy, the need is urgent.

“… [Sen. Sanders] needs to find a way to cut into Clinton’s support among African-Americans. Sanders is pulling in less than 10 percent of the black vote. Obama had about five times as much at this point. If Clinton continues to win 70 percent of the black vote, Sanders will likely get stopped in South Carolina. If, however, he can cut into that advantage, he could build a wave of momentum. …”

Why does Clinton have that African-American support?

(Is there anything beyond name recognition as the highest profile Democrat?)

This interview with Cornel West about the new generation provides an explanation and suggests that the time is right for a strong new message:

Maybe Sen. Sanders will update his arts initiative by now cohosting an NWA movie screening? Or, better, invite Dre to cosponsor an arts fundraiser in LA with Peace Over Violence for gender violence prevention among WOC?

However, FiveThirtyEight (climate change denial fiasco) is increasingly losing their credibility on Sanders as time goes on.

For example, Nate Silver in his August 21st editorial on Sanders, claims they took a break from their usual Sanders bashing to make this very telling statement:

I’m pretty sure that Sanders can’t beat Clinton head-to-head — he’s losing to her badly now, after all —

Now, let’s take a look at that poll he linked to within his words “losing to her badly”:

This is a dramatic, steady climb for Sanders while Clinton is in a steady decline… This is not showing Sanders in the process of “losing badly” to her.

I could understand if Nate had said that Sanders is still far behind Clinton (which is true) and not gaining “enough” to some metric he provides evidence for. However, for him to link to that chart while making the dismissive statement that makes Sanders appear to be in the process of “losing badly” to Hillary is rather disingenuous.

Sanders is making rapid gains on Hillary week after week. If that is losing, then I hope Bernie Sanders continues to keep losing very badly indeed.

[quote=“lgoldberg, post:12, topic:64231”]
This interview with Cornel West about the new generation provides an explanation and suggests that the time is right for a strong new message:
[/quote]Speaking of Cornel West:

The Bernie Sanders Surge Appears To Be Over

This Is How Bernie Sanders Could Win

“… Sanders continues to pick up less than 10 percent of black voters’ support. …”

Why does Clinton have that African-American support?

(Is there anything beyond name recognition as the highest profile Democrat?)

I don’t trust the credibility of those who continue to say that support from blacks and other people of color is low for Sanders. First of all, let’s take a look at Nate Silver (that’s linked above).

He also made this following bold claim earlier this month back on August 11th with his headline:

The Bernie Sanders Surge Appears To Be Over - link

Um, this is all national polls as of literally yesterday:

Does this look like the death of Sanders’ steady climb and Hillary’s steady decline to you? Me neither. Also, please see below my response in this post to @lgoldberg where 5 days later a major, mainstream, national poll also shows that Sanders is continuing to make a steady, dramatic climb as of August 16th.

So, what else are the corporate media, pundits and establishment bean counters like Nate Silver getting drastically wrong?

FOLLOWUP: Part of my response from yesterday: (emphasis mine) [quote=“Cowicide, post:305, topic:59394”]… Frankly, I think the media is headed for a lot of embarrassment as time goes on. The NYT has been spelling doom and gloom for Bernie Sanders from the very beginning and being proven increasingly wrong as time, massive crowds and support builds for Sanders despite their incessant naysaying. Also, the NYT isn’t taking into account the much more pervasive presence of online social media. The…

The Bernie Sanders Surge Appears To Be Over

Yeah, Nate Silver’s credibility surge appears to be over. This mainstream, national poll came about 5 days later after he made that bold claim. 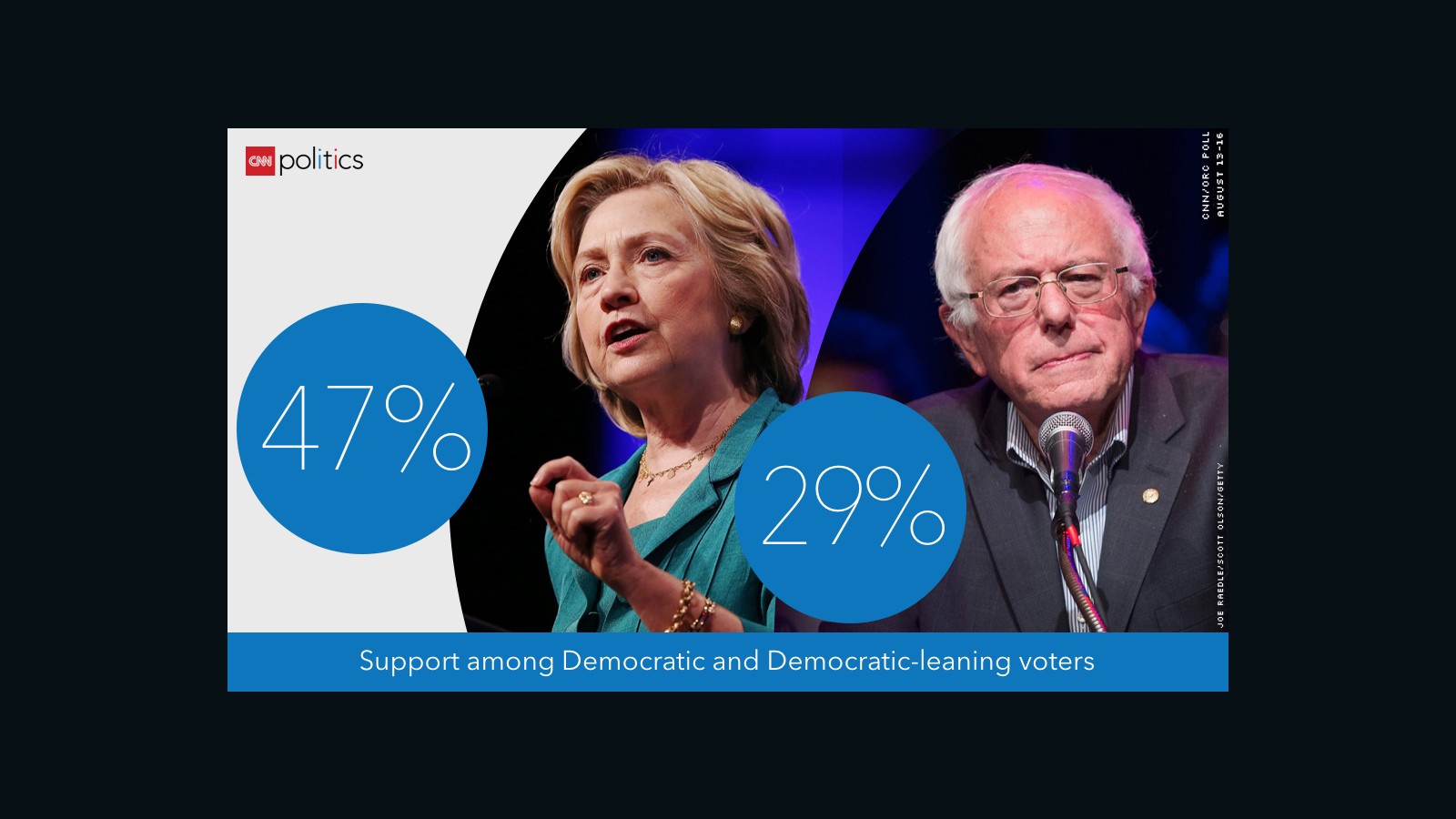 Hillary Clinton's lead over Bernie Sanders in the race for the Democratic nomination for president narrows.

Now, here’s my chart that shows where Sanders can be in that poll in a little over a month later IF the trend continues:

https://discourse-cloud-file-uploads.s3.dualstack.us-west-2.amazonaws.com/boingboing/optimized/3X/f/0/f0debd66feac206ca134a8836413d5b0915e8d4e_1_644x500.jpg
(Let’s also keep in mind that these polls results are skewed against Sanders due to the preponderance of cell phone users within his demographic among other factors)

And, here’s why I think some people react so weirdly to my chart even after reading my disclaimer at the bottom of it. That is, aside from some of Hillary’s minions who are simply terrified of that chart (and the hope it should give to Sanders’ supporters) and are trolling me on other parts of the Internet. What are these Hillary trolls afraid of, anyway? They keep saying Sanders has no chance of beating Hillary. You’d really, really think they’d have better things to do if that was the case.

However, FiveThirtyEight (climate change denial fiasco) is increasingly losing their credibility on Sanders as time goes on.

"… Is the 2016 Democratic primary a sequel of 2008? The Bernie Sanders supporters filling up my email inbox think so.

Less than 24 hours after [fivethirtyeight.com] wrote that the Sanders surge had slowed, or even stopped, a poll came out showing Sanders with his first lead in any state (other than his home state of Vermont). That poll stirred a lot of responses (some kind and some not so kind). …

One poll is just one poll; it could be an outlier, or it could signal some shift in the race. We need more data to find out. But we have plenty of data to see a number of problems with comparing Sanders’s rise to President Obama’s toppling of Hillary Clinton in 2008. …"

Nate Silver spoke truth to the Clinton campaign before almost anyone else. Organizing GOTV to POC — esp. in the south — should be the priority.

“… His [Sanders] ceiling is as high as his ability to gain among blacks and Latinos. Look at this latest YouGov poll that has a pretty decent sample among black voters. Sanders is currently getting … 4 percent. Should I say that one more time? 4 percent. You can’t win a Democratic nomination getting 4 percent of the black vote …”

SILVER Enten … One poll is just one poll; it could be an outlier,

It’s not just one poll and it wasn’t an outlier. Just like with the climate change denial, Nate Silver FiveThirtyEight is going to have to admit they’ve screwed up on this one.

This is all the polls as of literally yesterday on the 21st:

There is no stall in the surge for Sanders as Nate Silver has claimed was happening, nor in Hillary Clinton’s decline. Nate Silver clearly made yet another error on Bernie Sanders. Why are we still debating this fact?

“…It’s not just one poll and it wasn’t an outlier. Just like with the climate change denial, Nate Silver* is going to have to admit he’s screwed up on this one.”