Bernie Sanders on Brexit: urgent lessons for the Democrats

Look, everybody knows that you can’t Make America Great Again without burning it all down first. But this time, once the fire is out, us Normal Americans will end up on the top of the pile of ashes, somehow. We haven’t planned out how yet. But, beyond voting for Trump, we haven’t planned out the “burning it all down” part yet, either. Oh, well. We can burn that bridge when we come to it.*

When did 80s style CEO focused business practices start to get blames on democrats in office a decade later?

Trade agreements or not, the wealthy stay wealthy because the legal protections and baseless speculation about the “quality of executive staff” you get with blockbuster contracts. It’s even when major league sports or pop musicians changed their business models to squeeze every drop from the consumer to fuel the larger and large chunk of revenues they felt justified dipping into. Add in shareholders being absolutely bulletproof for any decision they push (executives being a gatekeeper or not) and having insurance on their investments in court, and wages are not going to go up.

I agree that trade agreement value to the United States is minimal, but Bernie was never correct that the global economy hasn’t tremendously improved the lifestyle of the third world significantly. As much as I dislike what trade agreements do to people in my life I can’t deny that globally it has been a benefit.

I support his opinions on the tax code, shifting national defense spending, etc. and I feel that part of what our government should be doing is improving our infrastructure (both traditional and the mostly privatized modern systems) - but I feel that he has danced around the racial aspects to the support for severing trade agreements and making a stronger national economy.

ECHIDNE OF THE SNAKES has an interesting demographic break down of the vote here: 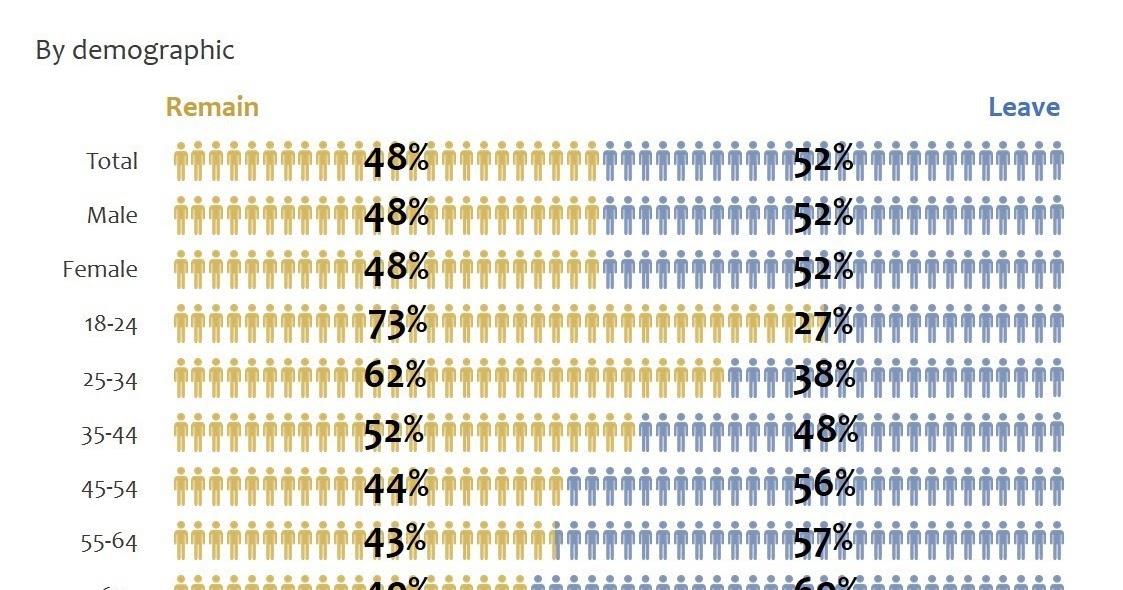 Introduction The option "Leave" beat the option "Remain" in Britain's vote about whether it should stay in the European Union  (EU) or ...

Damn, it would have been nice if this guy would have been your president. Nothing to be done about it now. If I wasn´t buried in work, I´d make a poster with a blue and red Trump/Clinton hybrid monster saying “NO HOPE” on the bottom.

It says something peculiar about the US psyche that people would only vote for Bernie if he was the nominee of the Democratic party. There is no practical reason why all of the people who were determined to vote for Sanders a couple of months ago can’t still do so at election time. People are disturningly fickle.

I’m ready to flip the checker board over. Just go ahead and dare me DNC.

Naturally, that means it’s time to throw the election to a sociopathic huckster who will destroy the planet through climate change, if he doesn’t destroy it through outright nuclear war.

I agree that trade agreement value to the United States is minimal, but Bernie was never correct that the global economy hasn’t tremendously improved the lifestyle of the third world significantly. As much as I dislike what trade agreements do to people in my life I can’t deny that globally it has been a benefit.

I don’t buy this. If we had a control world where we didn’t have those trade agreements we might know one way or the others, but honestly I think technology has improved the lives of the third world significantly and that trade agreements seem to be written to restrict access to technology rather than to provide it. People say, “Yeah, but how would they ever get the technology otherwise?” but, it’s really hard for me to imagine a world with fast global travel and even faster information sharing where somehow entire continents are kept in the dark.

If you actually read Clinton’s platform it’s got lots of great stuff in there. Then you say, “Okay, this is what you are promising us, but what did you promise Goldman Sachs?” and she says, “Not telling!”

I don’t think it’s her platform that’s really at issue, I think a sizable number of people think she is totally untrustworthy, and the that best elements of her platform simply won’t be implemented.

No, I think its time for Clinton to get the fuck out of the way.

Those are obvious, but I think not very practical.

He wont be on the ballot

Being given a choice is not the same as making a choice. The processes of determining who makes it onto ballots is fraudulent anyway. Choosing between the R and D nominees is practical for the leaders of those parties, but not for the average person. Like any other job, I prefer to simply hire who I think is most qualified - without the baggage of their friends, affiliates, cronies, hangers-on, etc. These parties for their own sake are so broad as to be meaningless.

If they wrote him in, you’d get President Trump

I think that this is reasoning which is circular with regards to my comment above. There appears to be a “common sense” notion that write-in candidates are never viable, because they are not endorsed by one of these two parties. That is precisely the kind of “something peculiar about the US psyche” that I was referring to.

As much as I dislike what trade agreements do to people in my life I can’t deny that globally it has been a benefit.

How does that help Americans living in America? You know, the ones that are pissed off and capable of voting?

He doesn’t even command a majority of Dem voters (granted - not saying he couldn’t command a majority of left-leaning voters). How would you convince people who support Clinton not to vote for her and instead write-in for Sanders? If you don’t, you split the vote. It’s also possible that an insurgency from the left as a third candidate would force Clinton right, to get more votes from wavering Republicans.

I wanted Sanders to be the candidate. But he isn’t.
Personally, I wouldn’t vote for Clinton unless I really had to, but an organized attempt to win as a third party (without even the support of the person you’re proposing to vote for?). Voting for Sanders/Stein now is only a protest vote (and I applaud those, generally - but not if they’ll materially affect the result in the worst possible way). One of my countries just committed suicide. I don’t want the other one to follow it.

Goldman Sachs is on the Left?