I’ve been trying to read things recently that aren’t on “teh Internets” and having trouble finding books I like.

So I decided to stick with the noir genre. I noticed that the author of A Simple Plan, which I absolutely loved in book and movie form, has written exactly one other novel: The Ruins. It’s horror. I like horror – that could work. Haven’t tried horror in a while. So I did. 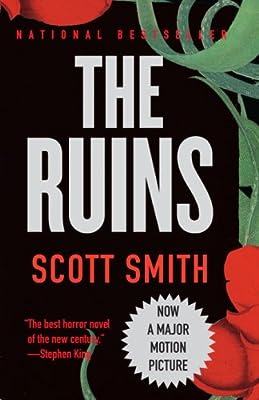 Trapped in the Mexican jungle, a group of friends stumble upon a creeping horror unlike anything they could ever imagine.Two young couples are on a lazy Mexican vacation–sun-drenched days, drunken nig ...

This book kinda knocked me on my ass. I’ve read quite a bit of horror in my day (all the King books and most of the other “major” authors) and The Ruins was scary in a way that I didn’t expect or see coming at all. Nor did it let up. Recommended.

I keep thinking about it. It reminds me a little bit of the existential terror of Open Water. Open Water is a 2003 American survival horror-thriller film. The story concerns an American couple who go scuba diving while on vacation in the Caribbean, only to find themselves stranded miles from shore in shark-infested waters when the crew of their boat accidentally leaves them behind. The film is loosely based on the true story of Tom and Eileen Lonergan, who in 1998 went out with a scuba diving group, Outer Edge Dive Company, on the Great Barrier Reef, and were accidentally left behind beca...

A true story, which is even more terrifying. I just imagine sometimes what that would feel like, to have that happen to you, the moment to moment experience. It’s probably my favorite horror movie. No creepy fantastical monsters. Just the terrifying, relentless reality that the universe does not give a fuck about you.

(Also do NOT look up Open Water 2. Just don’t. Please. For the children. Textbook hollywood ruins everything. There is a B movie adaptation of The Ruins as well, which didn’t look too bad, but meh.)

Those are my strong recommendations of favorite recent horror novels and films. Yours?

Ew ew ew ew ew!!! Man, was I let down by The Ruins. Excellent idea, kinda ruined by what I felt to be fairly awful writing. I first heard about the book through some review somewhere that was weirdly prescient… it completely predicted my reaction to the book. Starts out great, cool story, gross and scary, all that good stuff, but then the wheels fall off and you hate the characters and want them all to die and you wanna slap Scott Smith upside the head. Wish I could remember who the reviewer was; I’d never before known my own reaction to a book or movie to so perfectly mirror somebody else’s.

I did not see Open Water, but by all accounts it’s excellent. I think it would have been simply too dark (or wet or hopeless ) for me.

I’ve been looking (fairly half-assedly, since it’s tough to get a babysitter these days) for a good horror movie lately. Wasn’t into the Torture Porn stuff like Saw, came to hate the Found Footage shit (though the first Paranormal Activity was perfectly nifty, nobody needed to make any more of those), thought Insidious was dumb as a bag of hammers, really liked Cabin in the Woods and never felt the need to see another movie of that type ever again, though contrary to all my expectations, the remake of Evil Dead turned out to be genuinely too scary for me.

Check out the recent stuff Stephen King’s son Joe Hill has been putting out lately. The guy is a real talent.

Honestly, lately I’ve been wallowing in old favorites rather than new or recent stuff. Re-reading Joe R. Lansdale, Lovecraft, that sort of stuff. But if you dig noir, may I recommend Lansdale’s Hap Collins and Leonard Pine books. They’re not set in L.A. in the 40s (more like East Texas in the fairly recent past), but there are still heavy elements of crime and danger and snappy dialogue and fistfights and gunplay and all manner of good stuff. Not horror (though Lansdale does plenty of that), but still hugely entertaining.

I always come back to this, and it’s not all that recent by now, but if you haven’t seen Neil Marshall’s Dog Soldiers and you like werewolf movies you need to do yourself a huge favor and see it ASAP. My brother (who’s a horror filmmaker in his own right) still thinks American Werewolf in London and The Howling are the best werewolf movies ever made, but for my money, he’s mistaken. That opening scene with the tent zipper kills me every time.

That Nicole Kidman ghost movie The Others is great… a ridiculously old-fashioned, atmospheric, and nearly bloodless horror movie that manages to work like a charm of perfect creepiness. Also, Brotherhood of the Wolf has some amazing moments. There’s a great bit where a character is in the foreground, looking over the cameraman’s shoulder or something, and waaaay in the background, all out of focus, the monster comes casually strolling into frame, and the camera doesn’t even acknowledge it. You almost want to yell at the cameraman, “Look! There it is! It’s gonna come get ya! Get moving! Or at least rack focus and acknowledge that you see it too!” Nice touch.

Man, it’s been a long, long time since I saw a truly excellent horror movie. Was Cabin in the Woods really the latest one? I think it may have been. I’ll have to ask my wife. And I gotta get out more!

I thought The Ruins was above average for a horror, not great, but above average. A horror film I quite like but doesn’t get a lot of ink is Midnight Meat Train. A young Bradley Cooper stars and there’s a cameo by Brooke Shields. The director is Japanese and it’s based on a short story by Clive Barker. It’s a great ride, but the ending is something of a let down IMHO. You decide. The original Wicker Man is also a good film–very creepy. I also like Demons (1985)–Dario Argento wrote the screenplay–and Argento’s Deep Red.
As for novels, run, don’t walk, to find Infected by Scott Sigler. You’ll thank me

71% tomatometer, which isn’t bad at all. I find Clive Barker’s stuff (in written form) a bit hit or miss personally.

edit: also agree that the original (let’s all forget the Nick Cage version exists, shall we) Wicker Man is a great example of slowly amplifying “gee, something is slightly off here” culminating in real horror.

Some other example of basically bad horror movies that have really great “something is off” lead-ups at the beginning that don’t really pay off:

Not defending either film at all, just the beginning parts.

Yeah, that should have been better than it ended up being. It and all its sequels were just excuses to build the most elaborate Rube Goldbergesque deaths possible. Which is a shame; that particular construct could have worked much better, IMHO, in a slightly different context that wasn’t simply about Death being cheated and exacting his vengeance. I’ve been toying with an idea about gods (particularly the one known as Fate) taking a few decades off work, and then coming back and finding out the Ship of Destiny (such as it is) has veered too far off course without her hand on the tiller, and so she has to set things right by making certain people die (or otherwise removing them from the equation) and helping others succeed, using the weirdest and most incredibly unlikely (and yet still barely physically possible, at least individually) coincidences and happenstances. People struck by meteorites and having to dodge several falling pianos and open manholes, that kind of thing.

One of these days I’ll finish it.

This topic was automatically closed after 1128 days. New replies are no longer allowed.