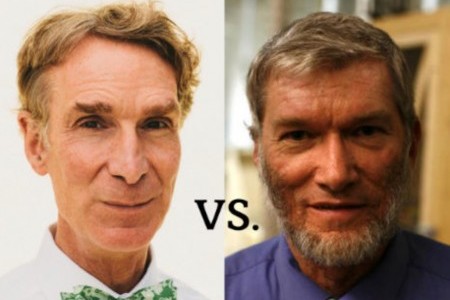 A few weeks ago there was a discussion about this debate, where most people predicted that it wouldn’t be aired. It was actually possible to watch it live last night and you can watch again on Youtube. There’s also a summary here. Basically it went as you might have guessed: Ken Ham kept referring to the Bible as evidence and continued to use arguments that I remember from Creation magazine 20 years ago, while Nye focused a lot on the danger of allowing creationism to infiltrate science education.

Just shitting in his hand and throwing it at Ham would have been a perfectly valid rebuttal.

I think you just totally killed the thread with the ultimate reply.

…But it’s kinda self-killing: ‘Nye versus Ham’ does violence to the definition of ‘versus’.

Oh hey, I love how this is up…

He could have tried the Dr Rudy technique:

This topic was automatically closed after 1109 days. New replies are no longer allowed.