Bird love: Hyacinth macaws are being so affectionate with this girl

That could very well be. He hasn’t mentioned if there are any clear markings that would identify individual birds that he could recognize. Ironic that they recognize him, but he doesn’t recognize them.

I can’t tell the scrub jays apart , either. Fledglings look different from adults, but adults all look the same. I sometimes get the impression that they’re trying to communicate, and think I’m incredibly stupid and obtuse for not being able to understand them.

I don’t mean to offend anyone, but I do feel that there needs to be a mention of the Norwegian Blue in this thread…
…
…
Beautiful plumage 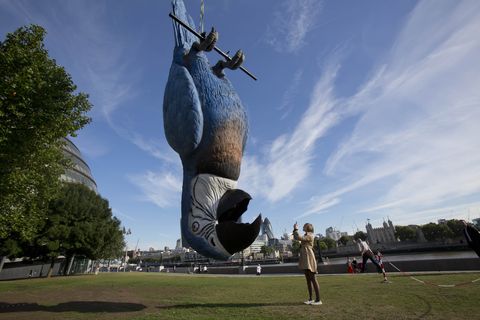 Just be sure to set your parrot up with a nest egg at around the same time that it is a nest egg and it should be set for retirement, right?

Birds can be incredibly loving, but it cuts both ways. My grandma had a bird that never left her shoulder. It loved her like crazy. The problem was all other humans were seen as threats to her and the bird would attack you without warning. When grandma died the bird had to be put down because nobody else could get near it. Grandma sure loved that thing though.

ETA: I still have a scar on my ear from when that bird went for my face. I was sitting across the room from grandma, but that was too close

Did they have this when you posted?

His claims have been solidly rejected by the administrators of the Chartwell property, Churchill’s former country home, who have no record of any parrot. Further, Churchill’s daughter, Lady Soames, has denied her father ever owned a macaw. According to Soames, Churchill did own a grey parrot named Polly, but sold the bird before assuming the role of Prime Minister.[2]