Blackwater threatened to murder a chief State Dept. investigator in Iraq in 2007

Good gods, they really went out of their way to be like some villainous organization from an action movie, didn’t they? Sinister name, check. Corrupt war profiteering, check. Wantonly killing civilians and allied soldiers, check. Threatening to kill investigators to demonstrate how the system was powerless against them, check. At about this point in the movie, Arnold Schwarzenegger would be starting to blow up Blackwater outposts and gun down large numbers of black-clad mercenaries…

I suspect that it’s more than a coincidence that one of the most notorious mercenaries in Westeros eventually dubs himself “Ser Bronn of the Blackwater.”

Don’t forget a complicit military that practices psy-ops on American politicians while other parts of the military-industrial complex are busy treasonously spying on them and gathering dirt as well:

Explains a lot about what happened to Al Franken, in my opinion. Take a look at Al Franken’s “switcheroo” after being specifically targeted by military psy-ops:

EDIT: Whoops, just realized that article link is dead now. I archived it on my drive, so here’s the important excerpts:

Sen. Al Franken on NSA spying on U.S. citizens, then and now

In 2006, Sen. Al Franken, D-Minn., was critical of the U.S. National Security Agency’s (NSA) spying on Americans and foreign nationals living in the United States. In fact, he called the whole notion of eavesdropping: “They’re trying to justify these warrantless wiretaps by saying, ‘Oh, it’s al-Qaida!’ One guy is saying it’s just al-Qaida — the Hayden guy, and then on the other hand, you hear from the FBI that they were inundated with referrals on all kinds of stuff with these calls, so much so that they couldn’t get to their real work, and that none of the referrals led anywhere.

“I think it’s a Roveian strategy: “We win on national security; we’ll scare people, and then we’ll just win.”

Now that he’s a U.S. Senator, Mr. Franken is singing a different tune: “I have a high level of confidence that this is used to protect us, and I know that it has been successful in preventing terrorism.

More on the psy-ops: 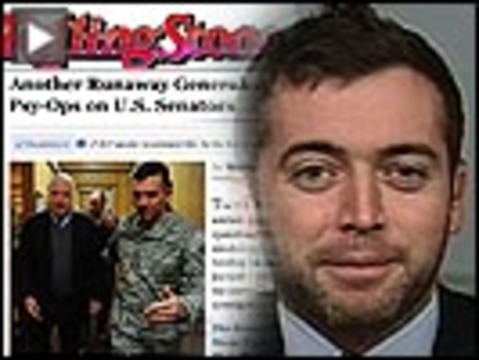 Federal law prohibits the military from using propaganda and psychological tactics on U.S. citizens, but that is exactly what may have happened in Afghanistan, according to reporter Michael Hastings, who joins us to speak about his recent exposé for...

And, meanwhile, there’s still Americans that say they can’t see the harm in having this same, corrupt, power-hungery, money-hungry, military-industrial complex spy on them non-top via the NSA. Fucking morons.

At about this point in the movie, Arnold Schwarzenegger would be starting to blow up Blackwater outposts and gun down large numbers of black-clad mercenaries…

Frankly, I know some vets that would have liked to have fragged some of the Blackwater assholes while they were in Iraq for a host of good reasons. But, just on this treasonous murder threat alone I think it’s time for the United States to declare war on these evil fucks and bring them to justice. It’s time to take these fuckers down and that little silver-spooned, inbred Erik Prince bitch with them.

If they say they won’t be taken alive, let’s have some non-privatized, American special forces oblige them.

`The part where the state department just decided to call off the investigation, rather than lose their favorite loose-cannon rentacops is in some ways even worse.

Violent, arrogant, opportunists are dangerous; but unless somebody puts up with their shit and covers for them, they have a problem with making enemies. If they are provided with cover, though, the rot just spreads.

Blackwater is, obviously, not an institution we really want around; but whoever at the state department was a-OK with them is incompetent or much, much, worse.

What worries me about breaking up Blackwater is what you do with the employees – highly experienced ex-(government)-military who aren’t in the line of work to defend the Constitution or earn money for college via the GI Bill. Managed by highly politically collected military contractor execs.

It’s like the origin story for the next generation’s Hydra.

Not to mention the deployment of Blackwater in Louisiana, post-Katrina, where they did… well, who knows what. We’ll probably never know how many people they killed there and what else they did.

whoever at the state department was a-OK with them is incompetent or much, much, worse.

Sounds like it’s a whole web of complicity and government connections. Apparently Blackwater is chock-full of former CIA and Pentagon officials, and there were personal ties to the Bush administration as Blackwater’s founder and his family have heavy ties (and are major contributors) to the Republican party and super-conservative Christian groups to which Cheney and Bush were also connected. There was some pretty extreme cronyism going on. 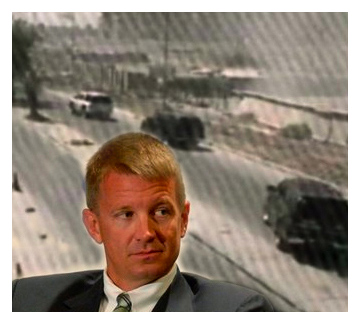 The Bush administration’s ties to Blackwater

Blamed in the deaths of Iraqi civilians, the private security firm has long ties to the White House and prominent Republicans, including Ken Starr.

I remember a story from some years back of a female officer at the Inspector General office who was investigating one of these outfits. This upset one of these contractor assholes to such a degree that he burst into her office (inside the Pentagon!), upending her table and screaming that he would use his political connections to get her fired. She complained to her superior who could only shrug his shoulders, it was above their heads. She was forced to end the investigation, even though that kind of behavior practically screams he’s guilty of something.

When exactly did being a mercenary become an acceptable career choice? They used to be washed up thugs that you hired when someone in a lawless corner of the third world needed killing, about on the level of crack whores on the professional respectability scale.

When exactly did being a mercenary become an acceptable career choice?

When they rebranded themselves “Military Contractors.”