In the assorted political threads, there’s been a minority but persistent view expressed that Bernie Sanders, or the Sanders campaign, or Sanders supporters are in some way responsible for Clinton’s loss.

So, this is the thread to bring those arguments into focus; have at it.

But I may as well begin by getting my own position on the table. I’ll do it by framing and responding to what I see as some of the standard critiques.

Hillary lost because Bernie made her look bad during the primary

Hillary managed to look bad all on her own.

If anything, Bernie should be criticised for going too easy on Clinton. He was always aware that he had very little chance of overcoming Clinton’s institutional advantage; although he came to believe during the campaign that he had a slim chance, he was never confident that he would succeed.

As a result, from the very beginning of the campaign, he was hyper-aware that Clinton was the likely candidate and that doing too much damage to her in the primary could result in a GOP victory. So, he brought a feather duster to a knife fight.

He refrained from criticising Clinton on several obvious weaknesses, and even in his strongest critiques (Goldman Sachs, Iraq, etc) he restrained himself to implying questionable judgement rather than employing a full-throated attack. In response, Clinton went straight for red-baiting, insinuations of sexism and racism, beat-ups over nonsense (the “establishment” kerfuffle) and flirting with anti-semitism.

A less restrained opponent of Clinton would have been hammering away at a long record of blatant corruption, disastrous misjudgment, cultural insularity, moral cowardice and political betrayal, in terms as harsh and direct as that.

Firstly: no they didn’t. The majority of Bernie supporters turned out loyally for Clinton, even though they were justifiably revolted by the prospect.

Of those who didn’t…the whole point of Bernie’s campaign was that he could attract voters who would not vote for Clinton. You can’t blame him for being right about that.

It needs to be understood that those Bernie supporters who didn’t vote for Clinton are not disloyal, lazy or deluded Democrats. They’re not Democrats at all; they don’t identify with parties.

They’re disillusioned Americans, who mostly do not vote because they accurately perceive that both major parties are hopelessly corrupt and do not represent their interests. In Bernie they saw a chance that this could change; in the Democratic primary, they saw the lengths to which the plutocratic establishment would go in order to prevent that from happening.

This argument is occasionally presented as the idea that you can’t describe the primary as rigged unless HRC personally falsified every vote.

To employ an analogy: if you wish to corrupt the result of a football game by bribing the referee, do you want him to just inexplicably declare your team the winner regardless of the score? Or would you prefer him to use a more subtle approach, ensuring that all of the close and debatable calls during the game went in your team’s favour? Not so much that it’s totally obvious, but enough so that even an exceptional opponent would struggle against the biased context.

Bernie was playing a game in which he started twenty points behind, in which the referee’s calls were one-sided to the point of nearly inciting a riot in the stands, but the home audience didn’t know because the TV commentators were bribed as well.

Clinton spent the entire Obama administration locking down every institutional advantage possible. Is this corrupt? No. But it does distort the extent to which the result of a primary represents the unbiased will of the electorate.

The DNC, in collusion with the Clinton campaign, spent the entire primary campaign actively working to hand the win to Clinton. Is this corrupt? Yes. It explicitly violates written DNC rules, established DNC norms, and basic standards of honesty.

She was declared heir to the throne in November 2008 after Obama won. Others got out of the way – like Biden. Bernie did not. So sure it’s his fault.

Blaming Obama 08 makes more sense than blaming Bernie 16. Clinton 08 was an actual lock, and Obama would have only been more qualified by 16.

The turnout numbers don’t lie. How would it have been different in 2008? Because Palin was a trainwreck? Not enough fake tan on the R ticket?

Nopesconsin: The America That Never Wanted Hillary To Be President [OC] : dataisbeautiful 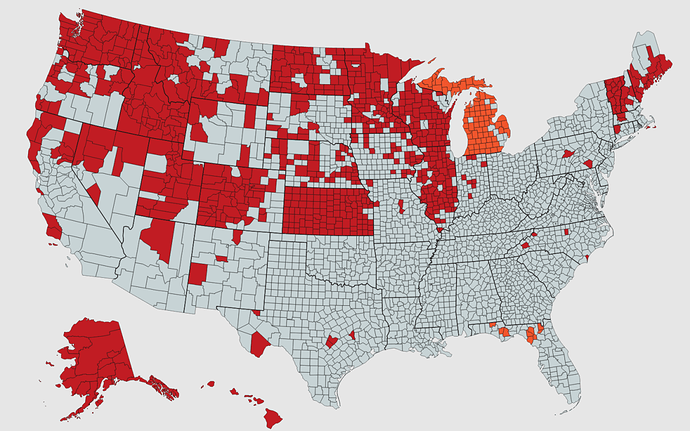 The PA map is literally the only truly interesting part of the map. There are only a couple of red counties, voting participation was strong, and Hillary lost worse there than in WI or MI.

Looks like the state went solid Hillary in 08 & 16 and polled that way until Trump won more clearly than MI and WI. That’s… that’s not a good trend…

Michigan is the odd red because she was the only one on the ticket in 2008 because the other Dems were boycotting their election rule changes.

For those furriners amongst us who can’t even reliably locate most US states: anyone want to put that map into narrative terms? What does it tell you?

Obama probably would have all of MI in 08. He was a hot ticket from about 06 on there.

It tells me Bernie would have an uphill battle in PA and probably would never even known.

I understand why Hillary dropped the race early on the 8th. Losing PA would have been a heartbreaker.

For those furriners amongst us who can’t even reliably locate most US states: anyone want to put that map into narrative terms? What does it tell you?

Just tells one that there were wide swaths of the US where Democrats never supported Hillary (the red counties). The red areas either voted for Bernie this year or Obama in 2008. Democrats in Wisconsin, Minnesota, Michigan, Washington State, Illinois, Alaska, Hawaii, New Hampshire, many solid Republican states, and good chunks of a few others appear to have not ever been fans of HRC.

In response, Clinton went straight for red-baiting, insinuations of sexism and racism, beat-ups over nonsense (the “establishment” kerfuffle) and flirting with anti-semitism.

Clinton never did this. Some of her surrogates did.

I don’t blame the tough primary or Bernie for Clinton’s loss, I do think that the constant repetition of false Fox tropes by people on both sides certainly hurt her, and I especially think that “Hillary managed to look bad all on her own” is simply not true, it is the result of decades of damage by the right.

Clinton won the overwhelming majority of the primaries from late April until the end, when Sanders was at the peak of his momentum and the DNC rigging was no longer effectively an excuse. Primary voters simply preferred Clinton.

As far as I can tell, only one actual rule was violated, namely the one requiring the DNC chair to ensure that staffers act impartially, and that rule was literally violated only in the form of one fundraiser organized by one staffer in his spare time, and I’ve seen mixed stories about whether DWS even knew of that fundraiser before it happened.

Why not ask the furriner who started the thread? He seems to know enough about US politics to have strong detailed opinions about the election and feel comfortable Ozplaining it to us.

Quit looking for someone to blame, because that shit is counter-productive; and let’s work together to keep things from going straight to hell. All us ‘Others’ have is each other.

Clinton never did this. Some of her surrogates did.

Is that a meaningful distinction now? Is she going to run again with different surrogates?

Why not ask the furriner who started the thread? He seems to know enough about US politics to have strong detailed opinions about the election and feel comfortable Ozplaining it to us.

Is that a meaningful distinction now? Is she going to run again with different surrogates?

No, I just think that Clinton is a fundamentally decent person whose followers - like the followers of candidates often are during heated elections - said some stupid things. I don’t defend her followers any more than I defend Sanders followers who repeat Breitbart lies.

[quote=“smulder, post:16, topic:89323”]
Oh look, xenophobia.[/quote]
“Furriner” isn’t my word. Everyone in the world had some stake in this election, I enjoy the perspectives of people from everywhere in the threads, until I see self-righteous not-fully-informed rants from people not in the US telling those of us who are here how our system works and how we should or should not discuss our own elections.

The DNC, in collusion with the Clinton campaign, spent the entire primary campaign actively working to hand the win to Clinton. Is this corrupt? Yes. It explicitly violates written DNC rules, established DNC norms, and basic standards of honesty.

could we get a citation for this? if by this you mean that the democratic establishment preferred the establishment candidate then, yes, by all means politics happened. but the day to day friction along with the give and take of politics is not the same thing as corruption. sanders fought a good race but he couldn’t beat her in the primaries. if he could have done so consistently those superdelegates would have ended up being pledged to him. i don’t see what you’re really getting at here.

i think it’s a shame that the winner of the popular vote has lost the election, the second time this century i’ve been disappointed in this fashion. the slave power was very clever at the founding and many of the ways they used to help them hold onto control still end up fucking us today.

could we get a citation for this?

That the DNC acted as Clinton partisans, that the Clinton campaign was aware of this, or that this was a violation of DNC rules?

the last part. i’ve seen this thesis a few times but all i generally see being put forward to support it is reports of politics in action.

if by this you mean that the democratic establishment preferred the establishment candidate then, yes, by all means politics happened.

Quit looking for someone to blame, because that shit is counter-productive; and let’s work together to keep things from going straight to hell. All us ‘Others’ have is each other.

I agree. But the DNC does need to take a long hard look at why it lost this election that they believed they couldn’t, why the DNC believed they could simply install an unpopular candidate in the Oval Office while the GOP fell apart. I don’t have to look for someone to blame. The DNC’s self-serving undemocratic elitist political class threw the country under the bus. I don’t care who is personally to blame. I care if and how we can change the DNC so it doesn’t hand us eight years of uncontested GOP government and the most reactionary right-wing Court in a century.

The DNC had it’s chance to do this their way and this is where it got us.