Bloated corpse of Colonel Sanders to star in KFC comic

When I was a kid restaurants gave away self-themed comics books. They were horribly drawn with self-serving stories.

In college I used to collect the ones given away by Big Boy restaurants, which had a revival in interstate highway rest stops. I probably “donated” them to the campus SF library.

There better be an ad for Twinkies in there. 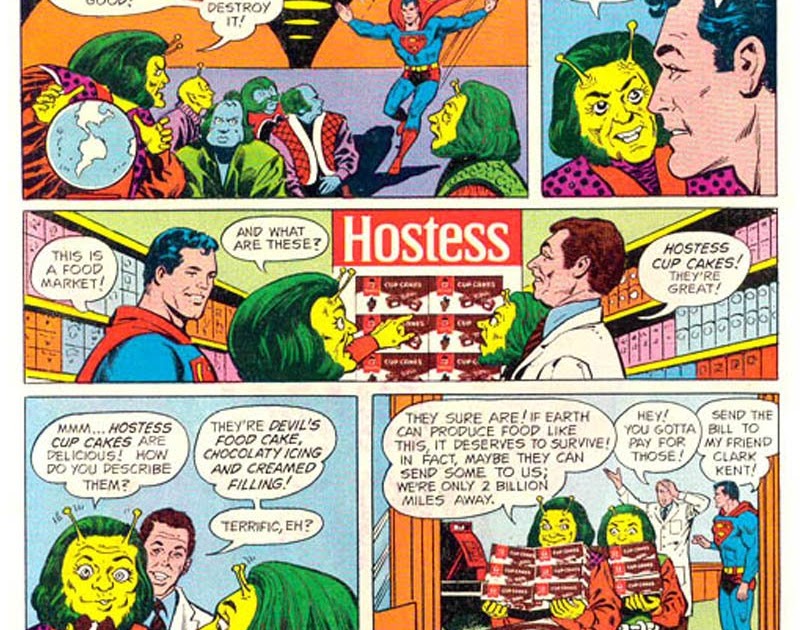 And so we come at last to the greatest comic strips ever done in the history of the medium. The Hostess Twinkies & fruit pies ads started i...

If you love comics and fried chicken and subliminal marketing, then you’ll love this exclusive #SDCC comic about me! pic.twitter.com/J06w4XSU7c

Is it terribly subliminal? Because it sure doesn’t seem like it to me. Maybe it’s the tweet advising my conscious mind that it is subliminal marketing, maybe it is the heavy branding on the terrible comic…

Maybe it’s subliminal marketing for some OTHER product that hasn’t even occurred to you yet.

So the next time I see a fool in a string tie and I’m tempted to run amuck with turkey baster full of chicken squeezins, I’ll know what that’s all about!

Fun fact: KFC actually started in Utah (as Harmon’s Cafe) and for some reason people get weird and refuse to believe this (in a global warming kind of way); which leads me to ask: if KFC started in Kentucky, then what would the big deal be about selling Kentucky style chicken to Kentuckians?

Another fun story that requires some background: My dad was basically born as a baby trap from a crazed mother to a much older man, he grew up being bounced around from distant relatives to military and catholic schools, almost drafted despite having a paralyzed shoulder, homeless for periods of time, formed an actual bike gang, worked on oil rigs and power plants in the most gawd-forsaken country, etc etc [TL;DR: the man has had a shitty life]. Well sometime after he ‘graduated’ high school he worked for some of the first KFCs and the Colonel. When asked what he was like my dad’s go to answer is “the meanest fucker I’ve ever met” and will usually won’t elaborate. And this is a man who will gleefully tell you about the time tell you about when a motorcycle accident took about 25% of his skin, or when rival bikers set his car on fire-with him in it.

I used to get free comics at Buster Brown shoes, and that was the 70s. Do they even exist anymore?

'tis about as subliminal as a swift kick to the groin.

if KFC started in Kentucky, then what would the big deal be about selling Kentucky style chicken to Kentuckians?

Not outside the realm of plausibility.

if KFC started in Kentucky, then what would the big deal be about selling Kentucky style chicken to Kentuckians?

I dunno if people of Kentucky Brand Kentucky are as regionally proud as other states, but I can tell you that if you are in Texas and want to sell something to Texans calling it Texan really seems to work. It’s odd, I would think it’s for tourists, all the Texas branded shit, but people in Texas whether transplants or native born eat that shit up, and not just Tex-Mex. You could sell personal lube or dishwashing detergent and given the choice they’ll often opt fer Texan because yeehaw?

I used to get free comics at Buster Brown shoes, and that was the 70s. Do they even exist anymore?

Wow, I’d forgotten about those. I’m pretty sure I had some of those too, because comics. According to Wikipedia, they are now known as Caleres, although the company’s own website does acknowledge that they used to be “Brown Shoe Company.” I haven’t seen a Buster Brown Shoe store in decades, and I’m not sure I’d even notice a Caleres.

Yep. I imagine party of the name change was the lack of currency is licensing a character who hasn’t seen mainstream print since the 20s.

Boo, no bloated corpse. Nice come on you dope.

Chik-Fil-A did a series of comic a few years ago and the artwork looks very, very similar. Maybe there’s a niche out there for comic artists working for fast food chains.