Great find! I recently rewired my popup trailer using a boring Buss 6 blade fuseholder from AutoZone. This one looks nicer, especially with the ground terminals.

If you have a fish finder and autopilot on your VW Microbus, I think we’d all be more interested in that than just the fusebox.

It is marine rated so it can be used on boats too.

The Amazon page has the following warning, just in case you didn’t know…

My previous car had an aftermarket autopilot installed. It would often blow the fuse, and the things I had to do to get it working again… I don’t want to talk about it.

If you have a fish finder and autopilot on your VW Microbus, I think we’d all be more interested in that than just the fusebox.

I have a fish finder, it is on the kayak I put on top of the microbus – want me to review that? No autopilot, but I do mount the iPhone or iPad on the dash for GPS.

I’m more interested in the air mattresses I use to make the lower bunk comfortable.

It is marine rated so it can be used on boats too.

I get the feeling the ground is there for boaters. In a car you can just ground off almost any ol’ piece of exposed metal frame or body.

Any chance you can find one of these for the in-headlight wiring on the BMW R/5 or R/6? Because that shit…oh my word…

For situations where a chassis ground isn’t available, I’m a big fan of these fuse boxes with ground pins: 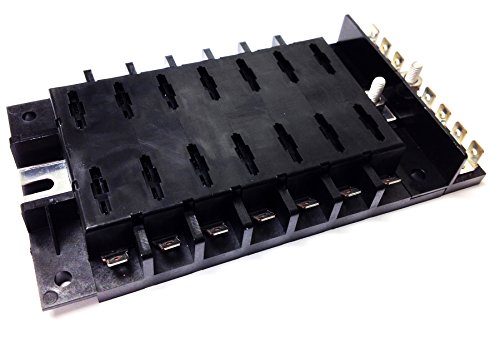 The Sierra FS40740 Fuse Block features interlocking modules that snap together and a flame resistant reinforced polyester base with ground bus bar.

Edit: oh, I see this one has a negative buss too. Nice.

Well shucks. I was imagining a sort of James Bond/Cheech and Chong bus/sub thing.

ALL that shit. Car electrics might as well be fucking necromancy. I’m OK with engines, drivetrains, brakes and so forth. Electrics? Get yourself a necromancer who understands it.

I have spent so many god damn hours in that headlight bucket with a multi tester.

One Advrider or airheads tip I liked: paint the inside of the bucket white. Makes it MUCH EASIER to see in there.

Blowing fuses on an R bike with a S fairing is just a huge pain in the ass. I love how the fairing looks, I hate trying to get the headlight out of it.

Get yourself a necromancer who understands it.

He is talking Airhead electrics, they are THE WORST. It all clearly labeled and should be straight forward, but it NEVER EVER IS.

I’ve actually considered how to reroute the wiring on the /5 to avoid exactly that horrible multi-tester hell. I’ve got (what I think are) the best schematics available, but holy fucking shit, that bucket–it’s HORRIBLE.
Confession: I rebuilt a '75 /6 and constantly had problems with the electrics on the bike. So many problems combined with a patience ground to dust in that bucket that I finally gave the bike away to a friend. Unfortunately, I think the bike is still in the same condition.

@GilbertWham Ain’t no necromancer bad-ass enough to handle the beemer’s electrics bucket. The only workable spell would be something along the lines of “Explode that motherfucker in a glowing white hot ball of rage and fury”.

I’ve actually considered how to reroute the wiring on the /5 to avoid exactly that horrible multi-tester hell.

Took me two weeks to find a short. Hours of messing about. God I had those diagrams. When I found out my Clymer had been updated I wanted to SCREAM.

I’ve owned vehicles made by British Leyland. I scoff at your German electrical woes…

Shall we discuss the joys of Triumph ownership? Electrical systems that won’t start the bike if the battery is below 100%.

Shall we discuss the joys of Triumph ownership?

Do you know any?

A guy down my street rides an old Indian–side shifter, retard/advance the timing from the handlebars, etc–claims it never breaks down. In all fairness, my newer bmw has probably ten times the wiring, and the number one rule is don’t fuck with the wiring.