Ever since i first espied the Fetts’ spaceship ~40 years ago! (Seriously, Empire Strikes Back was released 1980, egad) i’ve lazily wondered two things: (a) how did they arrive at such a unlikely (hence intriguing) shape for a spaceship? (don’t you know that a bounty-hunter’s spaceship should be a sexy race-car inspired arrow-shape!?) and, (2) where did the name “Slave” come from? who’s the slave? is this a commentary on the brutal isolated life of a bounty hunter? (next-up, in the ‘every galactic species is some homage to baby boomer George Lucas politically incorrect upbringing’ theory; trade-union: Chinese mandarins, etc Are the Tusken raiders Native Americans?)

It was inspired by a streetlamp: https://flic.kr/p/5GmfaU

It’s really a great set, fun to put together with some interesting and non-obvious connections. And those “some other character minifigs” include the first-ever Lego Zuckuss, completing the roster of ESB bounty hunters.

Not according to the designer:

From Concept to Screen: Slave I | StarWars.com

Piloted by the finest scum of the galaxy since 1980.

As for this Lego - I JUST bought the super fancy Slave I with like 3 bajillion pieces. And I have the smaller one that came out 3 or 4 years before that which looks similar to size and design as this…

As for “…some other character minifigs.” SOME OTHER CHARACTER MINIFIGS? No one gives a shit about Luke and Leia which have a dozen different figs. They care about the rare 4-LOM and first appearance of Zuckuss! 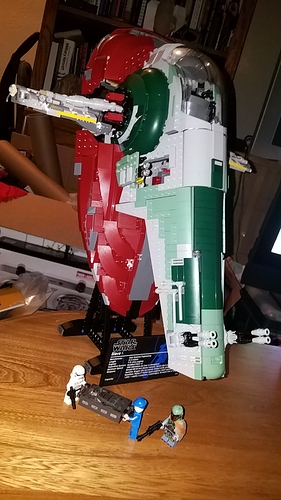 It’s not like I need money for anything, thanks lego.

I’d heard it was a coincidence as well, but Doug Chiang (Lucasfilm concept artist since the late 90s) said it was the streetlamp at Celebration this year, and showed a very convincing picture. I suspect it’s a muddy design process that the streetlamp played a part in, but we’ll probably never know for sure.

That panel was a fabulous window into the Star Wars design aesthetic, btw, and is well worth a watch: https://youtu.be/uYK1OXlm7Us

You can get 4-LOM (and Bossk, Dengar, and IG-88) in the inexpensive bounty hunters battle pack that came out last year. Still in stock in some places.

Well Rodis-Jamero claims it was just a coincidence after the fact, and he was thinking more of a radar dish. His sketches in that link above showed other sketches where it started with a rounder appearance. But when it comes to design work, it is full of conscious and unconscious decisions

You can get 4-LOM (and Bossk, Dengar, and IG-88) in the inexpensive bounty hunters battle pack that came out last year. Still in stock in some places.

Yes, they finally came out with a 4-LOM with that set. This is the first Zuckuss, which seems like an unlikely over sight.

There’s something heart-warming about a family-run business… (Fett and Son’s, not LEGO…)

That sound system is so fresh.

As for this Lego - I JUST bought the super fancy Slave I with like 3 bajillion pieces. And I have the smaller one that came out 3 or 4 years before that which looks similar to size and design as this…

That UCS Slave One is really nice. I had a fun time building mine over the course of a weekend last year.

It started as something for me and the kiddo - but considering shes only over once a week and we do other things, it was taking forever, so she let me finish it by myself. Took a lot longer than you would think.

I think it took longer than the Death Star. I really want to put together the Voltron from last year but my wife made the reasonable demand that we find space for Legos before we build more.