Who’s to say my employer isn’t wasting my time?(…)The only reason I come to work and get paid is because I’ll literally end up dead without that money (in the form of the health insurance).

Seems we have a different work ethic. I get paid for my time and expertise and therefore try to do my best.
But I’m not going to end up dead if I’m not employed thanks to the (sort of) free healthcare and a decent social security net my country has. Ending up dead without work and any security net seem to me like good reasons to not be unproductive at work too…

“boing boing” and represents the sounds of breasts bouncing.

[Jumps up and down. Checks.]
Perhaps I am doing something wrong.

They don’t give me much to do. 95% of the time is waiting for a phone to ring. 4% of the time is fixing a problem for the person on the other end of that phone. 1% of the time I’m given a “project” better suited to a powershell script. I would write the scripts to do the jobs, but usually I don’t have access to infrastructure information and a testing environment necessary to do that. And I can’t seem to get a response when I try to email the relevant people anyway.

The company is best characterized as both wasting my time and its money.

People aren’t machines to be run at full power for the designated time-periods, nor is all employment the kind of work that requires constant attention and effort. We have far too much of that de-humanising and unrealistic attitude in workplace management as it is; if you’re in a job that is like that, you should really stop and look around once in while and appreciate that there are other ways of working that aren’t necessarily of less moral worth than your own.

Doesn’t one wear a sports bra whilst jackhammering?

They’re baristas. The girl with lavender hair is Kafuu Chino. I am not making this up.

The company is best characterized as both wasting my time and its money.

Their time. You sold it. 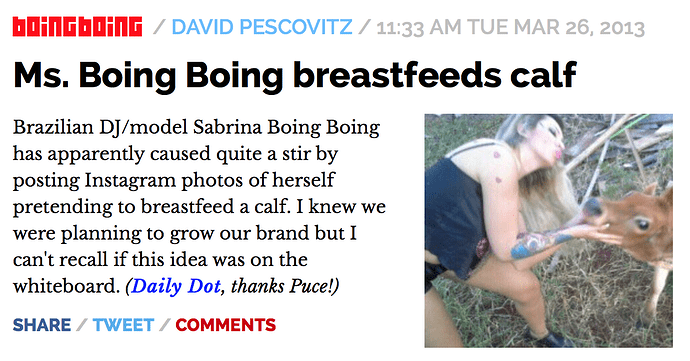 The new version seems more… boingy? Or is that just the dungarees?

way boingier! I’ve added the logo back onto that version and replaced the one in the gif bank. thanks!

ボインボイン (boin boin) is onomatopeia referring to breasts specifically, while ボイン (boin) by itself can be used as an adjective to mean “large-breasted.”

However, my part in this was just finding it on the Boing Boing main page and posting it here, alongside lewd suggestions.

I thought I recognized it from somewhere! Perhaps not a badge of honor, but still…

What if I work at a conservative religious institution, and BoingBoing’s sacrilegious headlines would upset my boss and get me fired?

I feel like someone agreeing to that particular employment niche would be prepared to generally comply with stricter-than-normal NSFW guidelines.

Looks like she’s getting a lot of pleasure from that jack hammer.

Looks like she’s getting a lot of pleasure from that jack hammer.

This is well within bOING’s mission…

Also, there are people who live in places like Singapore (such as myself), where viewing images like that in public is all sorts of illegal, even with the pixellation.