Bow to this rock-skipping master

“All stones must be of naturally formed Easdale slate and be no more than 3 inches in diameter at its widest point.”

No rules about thickness, shape, weight, etc. Looks like Easdale Island has a natural monopoly without a lot of tedious manufacture and homologation. No doubt synthetic “practice” stones will be available on Amazon soon.

I like that the over-60 category is “Old Tosser”.

The main video link is down.

The main video link is down.

There’s a great ‘Almost Impossible’ video about achieving the maximum number of skips:

I believe backspin is the key. 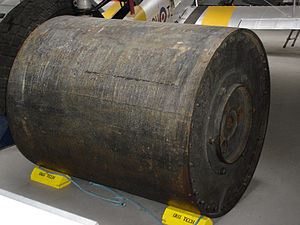 A bouncing bomb is a bomb designed to bounce to a target across water in a calculated manner to avoid obstacles such as torpedo nets, and to allow both the bomb's speed on arrival at the target and the timing of its detonation to be pre-determined, in a similar fashion to a regular naval depth charge.[Fn 1] The inventor of the first such bomb was the British engineer Barnes Wallis, whose "Upkeep" bouncing bomb was used in the RAF's Operation Chastise of May 1943 to bounce into German dams and e...

Thanks, Teknocholer! Totally worth it!

Spin is the key. Specifically back horizontal rifleing. Much like a rifle spins a bullet vertically to achieve greater distance, this guy spins it back against it’s horizontal axis and just the right angle so that its forward velocity slow down is minimized each time it hits the water. The spin prevents it from forward-dipping. It hits front side-up, like a speedboat, skipping and reducing drag.

I’m impressed that the lady in the green wig didn’t distract him and foul up his ‘game’.

I’ve been a vaguely unimpressive rock-skipper since I was a young lad of 10 years. So I’ve never been in a competitive level skipping tournament, so I must ask… what’s with the Oompa Loompa costume? Is it required for all certified skipping officials?

It’s the disgraced past champion, Opey Lopey. Oompa Loompas are legendary stone skimmers; they get it from practicing in the chocolate river and the psychadelic tunnel. Unfortunately there was a scandal a while back where Opey Lopey was caught pouring Fizzy Lifting Drink on his stones prior to competition. He’s been permanently banned from the sport. :’(

And from watching other videos about him, I learned that in Nigeria stone skipping is called “Lami Lami” because the stone “licks the water” like a dragonfly skittering across the surface. Best thing I’ve heard all week. (have to watch this one on youtube too, won’t play on embed…)

It is both humbling and inspiring to watch a true master.

We need a contest of man vs machine 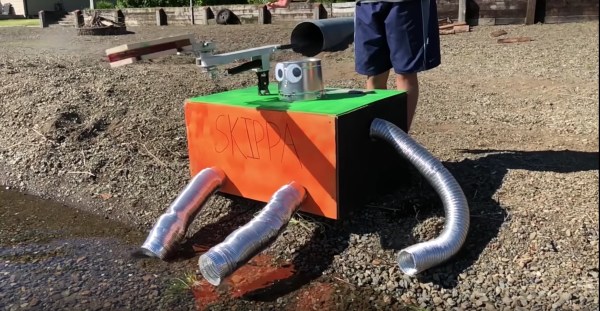