So I was saying, @chgoliz @jlw and others - the Tartine method works well for me.

Well great. Now I have to go and look this up and make my own damn bread.

Just remember - wheat, salt, water, and that’s it. For now.

Do you have a recipe link handy? I have a vague recollection of the original discussion of this, but for the life of me can’t find it now. 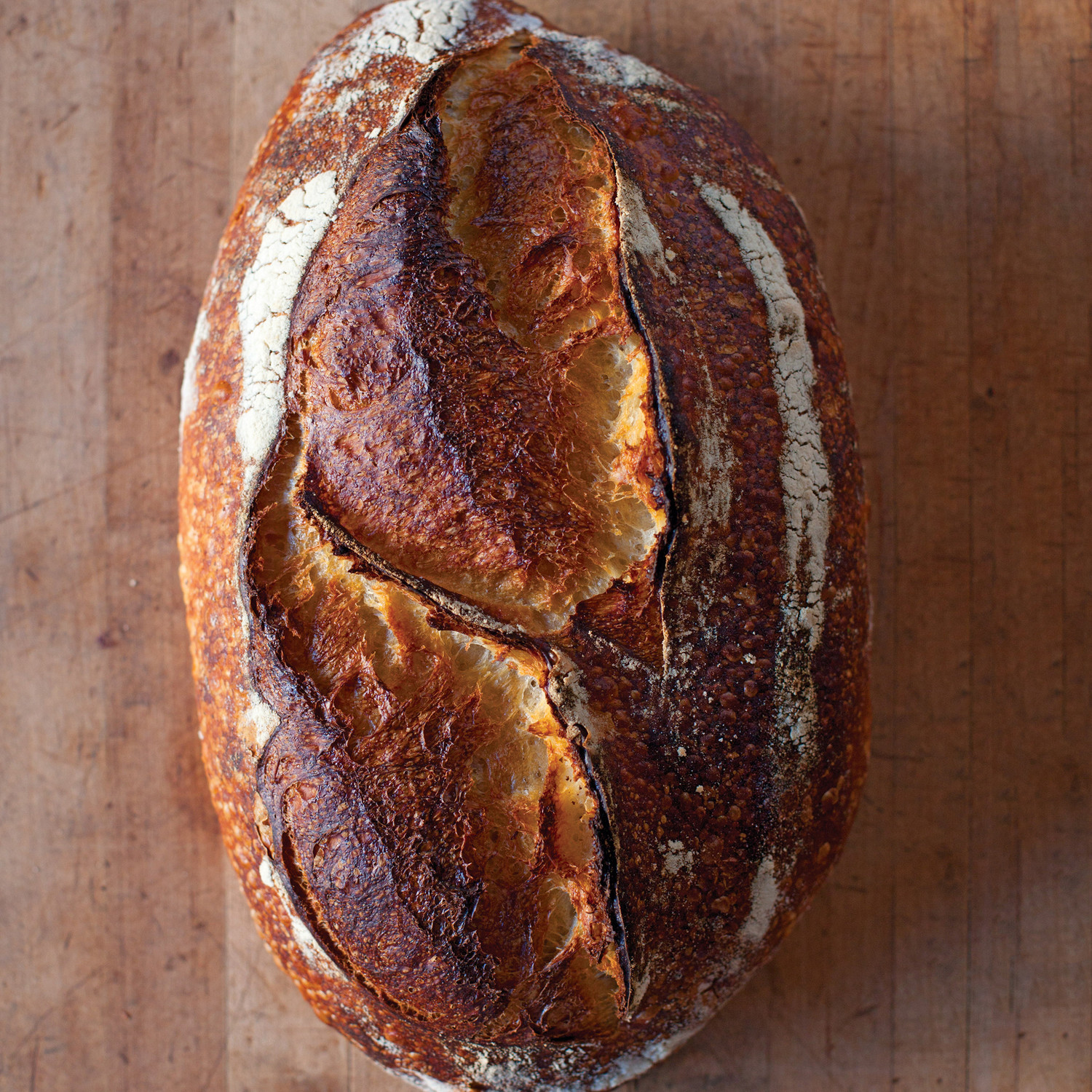 Loaves made with a natural leaven keep for a week -- one reason Chad Robertson, of San Francisco's legendary Tartine Bakery, prefers this time-honored technique. The resulting bread boasts a thick, burnished crust and a moist interior shot through...

Serves as a reminder list for me. Really, “Tartine” by Chad Robertson is a great (hyper-romanced*) book, and so is “Bread Matters” by an Brit, Andrew Whitley.

Sourdough beats all - especially because when you learn to keep it under your hypnotic control, you can vary the flavour from very wheaty through to very sour. I forced myself to eat a very, very sour loaf once, to not waste the effort, and to really understand more (see! … bit crazy).

The whole bread thing is much more than just the recipe and actions - the more you get a feel for what’s going on in multiple sub-systems of activity and influence, the better you can make your bread.

By the way I just ate half of one of those loaves. Mmmmmmm.

*I, by the way, am hyper-romanced. I nuance this by saying I’m just not totally practical. But give me half a second of freedom, and I’ll escape all this and become the Chad character of the book. Bread, surfing, travelling. I wonder what the real him is like

So are you using two separate dutch ovens to bake them, or do you bake them on an open stone?

I asked for – and got – a covered stone bake pan for my birthday that creates a Italian-style loaf. It’s more convenient for cutting than a big boule. Still working out the parameters. Among other issues, the lid isn’t as perfect a seal as the one on my cast iron dutch oven.

Those look yummy… I’ll have to experiment with some new bread recipes this semester… can you tell I’m in school mode… I mean weekend. :-/

Add some sunflower seeds! I love those damn things in bread!

2 dutch ovens, fresh delivered from the USA. I’m not a brand-y person, but the Lodge dutch ovens absolutely knock it out of the park. That seal is all important isn’t it!

Toppings are great fun - poppy seeds, sunflower seeds, pumpkin seeds, any ol’ seeds, oats, malted wheat, whatever. Not meat. Yet. Mix in a small % (5-10%) of dark rye flour to get very ■■■■■ bread that doesn’t stale as quickly. I love it, but the savour turns the kids’ noses!

Yep, the big boules, I quarter them, freeze some, eat the rest. At around 370 calories per 100g of flour, and 1kg of flour, man can live on bread alone, but man will grow wide.

Love the sound of the Italian loaf - I got some special German bakeware as a gift (special as in, I’ve never seen it); apparently nothing sticks to it, so I’m going to chuck some dough in and see what it does.

Beautiful. I am going to wake up my starter tonight.

If only we hadn’t run out of my daughter’s handmade strawberry jam (as in, she picked the wild strawberries in the forest in southern Germany, then made the jam with her host family), I’d offer to come over and help you finish those loaves!

I call it ‘re-animation’, and think of 50s flicks like The Blob and The Thing From Another World (bless 1970s afternoon TV for giving me what appears to be a lifelong trove of B&W memory treasures), and I am amused and have a personal paradise of stories to invent and enjoy while the organisms dangerously come back to warm life.

I brought mine out after 5 months in the cooler. Something’s right, because my grey goo came out fighting like Mo’ Ali. Couple of refreshes and that baby was ready to rock.

Starters and poolishes are beyond me. I need my bread process to be around 24 hours or less: our schedule shifts around too much (and we don’t eat bread on a daily basis) for me to be able to keep a longer-term dough schedule in my short-term memory bank!

I just feed my starter every 24 hours, it’s a little wake-up ritual, takes 3 mins. Switch containers daily though, to avoid anything nasty getting in and deciding it’s a nice home. “Apparently” the organisms develop a nice balance.

It’s a 24 hour process from ripe starter to loaf. Ripe starter, make a bigger starter, mix that with the bread flour, mess about with it for a few hours (or indeed, just knead it 10 mins then let it rise - but inferior crumb, you know), bake when ready. The bigger starter, you save a tablespoon for the daily starter ritual.

It kind of keeps you sharp on the whole thing too, you get a feel for the nose, the rhythm, structure of the whole thing, by observing the habits of your 50g petri dish. I imagine it mutates and evolves a bit too. Gets used to the different conditions, you get multiple strains, and a complex flavour at the end.

Leaving it in the back of the fridge … well, cold organisms create acidic output, which turns into grey yuck on top, and you have to refresh for a couple days, and so on. When I’m on a break, I refresh the starter and freeze it.

The only time my bread is >24 hours is when I’m following a cold process because I can’t be around. But you still have to be strict on timings to avoid getting acidic.

I may well (amateurishly) know more about this than I know about my earning occupation! See - a bit crazy, like.

I may well (amateurishly) know more about this than I know about my earning occupation!

I’m like that with genealogy. I make enough at my earning occupation that becoming a professional genealogist makes no sense, so I just do it for free for almost anyone who asks for my help. The list is quite long at this point! But unlike a starter, if I don’t get to it for a couple of days, no harm done.

Sometimes those things are good though. F’rinstance, I now have a batch of lovely, slow-dried chillies (and some REALLY nasty ex-apples, sadly)

There’s currently something in there that smells quite musty, but I can’t figure out what it is.

Slow-dried chilies in the refrigerator? Do they even need to be in there?

OK, I give up. I just wanted to drop in a thumbnail of the first loaf I did (about a month ago) with the new covered pan. I even uploaded to photobucket specifically to link to this thread.

Well, they were fresh chillies when they went in… Best way to dry fresh herbs to, IMO. string 'em up from the top shelf.