I recently joined the Labour party against my better judgement

On a whim I found myself in a voting booth yesterday against my better judgement.

These are strange times.

The attendant had a good laugh when, after much awkward form filling and many ignorant questions, I finally explained that I was technically an anarchist and hadn’t played this game in 20 years.

Good lord, what’s wrong with those truck drivers? Irn-Bru is bright orange. They must all have kidney trouble or something.

It is a bit more complicated than that and I feel extremely ambivalent about it.

Voters were promised the open market and trade of goods would remain and that a good trade deal with the EU would be easy to negotiate. This did not happen, could never have happened, but it was what they were told. If Brexit was a product bought in a shop you would be able to return it: Not fit for purpose and not as advertised.

The UK press and TV had been maligning and downright lying about the EU for decades. Remember the sausages, the bananas, the pillows, the unelected officials… They made the EU a huge boogyman that only existed to harm the poor ickle UK. And they swallowed it line, hook, and sinker.

That paved the way for the Brexit poisonous messages, it made it impossible for sense and truth to even be mentioned. Remember both major parties supported Brexit!!

I have many friends in the UK (quite of few of whom made it to the EU in time…) and I feel no joy in it, but this is what they elected, chose to do. Yes, they were lied to but ignorance is a choice in this time and age. There were voices of reason, hell Merkel squandered some good political capital to buy the UK two extension based on some very creative reading of EU regulations and still they malign her.

So on one hand, meh. Pave over Kent, reap what you sowed and good luck with it.

On the other hand, an enormous loss. I have seen good people lose jobs over this, careers broken up, marriages lost, friendship shattered. There are businesses going to fall over right where I live. Costs of simple things will go up, travel to the UK once a simple boat ride will now be a huge pain, all for some stupid political games to line some pockets of rich people… buggrit.

My point was that a lot of the loudest remain voices in the Labour party became silent the second Corbyn was gone. It was as if they never really believed in it and were just using it to beat the left with (some of whom supported remain, especially younger supporters).

Or alternatively, it’s that that ship has sailed - as frustrating as it is, Brexit can’t be undone now - we need to let Johnson fail to meet all his promises and get kicked out of power once this becomes apparent. I don’t like it but it’s the smart tactical move.

Plus there’s been Covid since just before the start of Starmer’s leadership (I can’t think of an election where circumstances changed more between voting opening and closing). Right now, challenging the government on that has the opportunity to save tens of thousands of lives in the short term, as well as trying to prevent taxpayers being saddled with huge amounts of debt because private sector companies are being used when public sector would be better. That is the priority.

It sucks that these kind of compromises have to happen, but I think they do have to.

I am sorry about the anti-trans sentiment. It’s not something I had read much about - there’s so much going on right now that staying on top of everything is impossible. I will commit to reading more and contacting my MP (Labour, part of the shadow cabinet) advocating for stronger trans rights, in the hope that it will help. And I think the best chance of a step forward is if the next government is Labour.

Yep. That’s the one. Tory humor. And now they’re the butt of their own joke

Or alternatively, it’s that that ship has sailed - as frustrating as it is, Brexit can’t be undone now - we need to let Johnson fail to meet all his promises and get kicked out of power once this becomes apparent. I don’t like it but it’s the smart tactical move.

Plus there’s been Covid since just before the start of Starmer’s leadership (I can’t think of an election where circumstances changed more between voting opening and closing). Right now, challenging the government on that has the opportunity to save tens of thousands of lives in the short term, as well as trying to prevent taxpayers being saddled with huge amounts of debt because private sector companies are being used when public sector would be better. That is the priority.

That would be good. When is Starmer going to start?

I am sorry about the anti-trans sentiment. It’s not something I had read much about - there’s so much going on right now that staying on top of everything is impossible.

A lot of the press haven’t been covering it or reporting the views of bigots as equal to their victims (like the Guardian), but Pink News are the best source.

Labour members plead with Keir Starmer to come out swinging for trans rights...

Opposition leader Keir Starmer has been slammed by Labour activists for a 'dereliction of duty' in failing to stand up for trans rights.

Keir Starmer will lose LGBT voters unless the party starts fighting transphobia, argues the chair of the Labour Campaign for Trans Rights.

This has been building up for months, but maybe we shouldn’t be surprised about the only leadership candidate who refused to sign the Labour Campaign for Trans Rights pledge.

A grassroots campaign for trans rights has launched inside the Labour Party, in response to concerns about a growing anti-trans movement within the party.

It’s been six months. I tried giving Starmer a chance and even lowered my expectations. He failed to deliver even then. At this point I’m trying to work out if and where Hanlon’s Razor applies.

Forget about Corbyn, I’d sooner have Ed Miliband back than this. At least with him I didn’t have to worry about if my life is in danger from the party that is supposed to represent me.

Former Labour leader Ed Miliband has lashed out at the British press over a series of articles attacking transgender equality.

Just wait until they begin building the refugee camps! On a clear day you’ll be able to hear the children screaming for miles

Our Cruella de Ville tribute act of a Home Secretary had drafted plans to build immigration centres on Ascention island.

Never before have I been so offended by something I 100% agree with.

Umm - not my recollection. Both major parties advocated remain in the referendum campaign.

Refusing to even acknowledge there’s a problem is definitely fucking worse than fudging it.

Umm - not my recollection. Both major parties advocated remain in the referendum campaign.

The tories were initially neutral, labour was officially against but never really took a stand. After the vote tories instrumented Brexit while labour officially whatevered around in the shadows.

Neither ever took a strong position against, labour still haven’t while it are the tories that are happily sailing into the storm.

They paved paradise and put up a parking lot.

If your urine is the same color as Irn-Bru, you need to see your GP, stat.

The urine in the bottles darkens a bit over time especially in the sunshine.

Kinda like whisky aged in barrels. Who knows how good it would be after three years?

And if they continue to do so, there is a good chance the UK won’t be around anymore in a few decades. The British Empire is long gone but many of its parts seceded without war as well, in its last few generations.

Note: I am not at all saying this is a bad thing, and am fully in support of letting communities govern themselves and “to dissolve the political bands which have connected them with another.” I just think what I’ve said is a truism: any government that consistently allows this will find its territory shrinking. I mean, I suppose if they’re really amazing they might find people voluntarily joining instead, I mean lots of countries wanted in on the EU for a while, but that’s also usually hard because it imposes a lot of costs up front on the countries being joined.

Of countries don’t want to join into your entity: empire, federation, or alliance. Maybe you should think about that?

It is indeed sad that enough Britons were ignorant and racist enough to trade their future and that of their kids for the empty promise of British sovereignty and greatness.

It’s sad for everyone else, so let’s just hope that the full onslaught of a harsh reality makes enough of them Brexiteers figure out how much they‘ve actually been had, so that things can eventually be rebuilt. 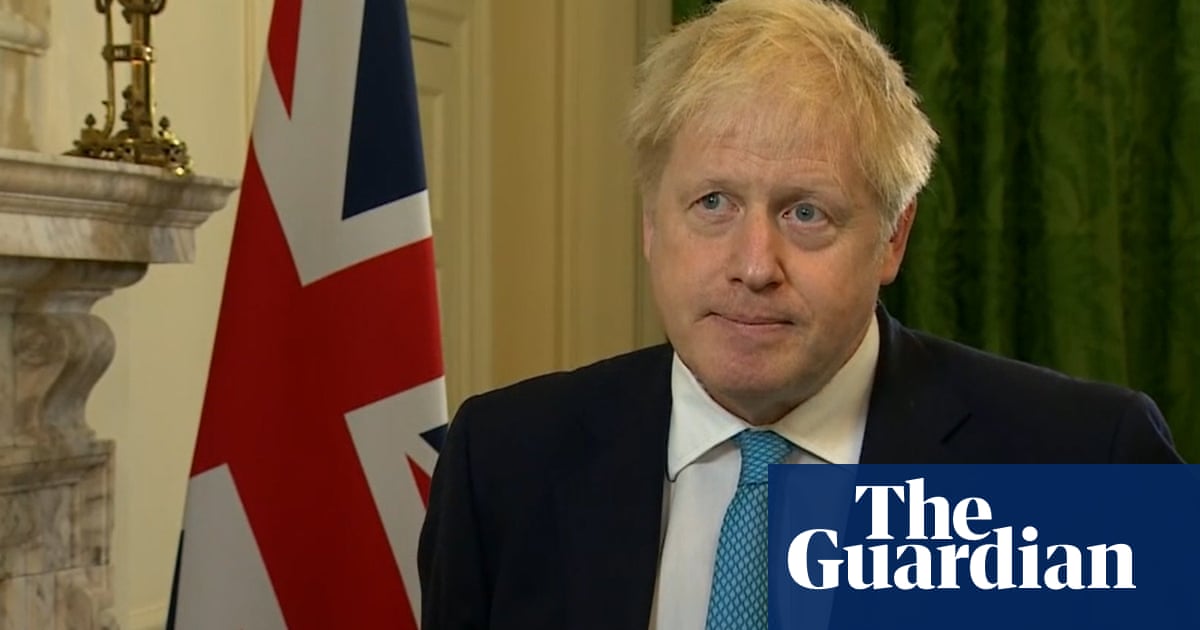 I have a theory that any system that promotes a two-party landscape will lead to a left party that is essentially useless, because it is too similar to a zero-sum game, and stifled the development of the capacity to deal with complex reality: there‘s no incentive for compromise, integration and openness. Let’s hope that shit falls apart sooner than later, so that it can be renewed, because it‘s long past reform.

Pretty sure the angels don’t want their share of that

I keep reminding family in the Republic that the resolution of the border may end up being the “East Germany” option of NI having its referendum and rejoining the EU. I recently got my daughter’s Irish citizenship established. My son’s in 2017 took 5 months. My daughter’s took over a year - at one point I emergency begged for her docs back so that she could go to my dad’s funeral in Dublin - and the reason was that all of the folks in NI have the option of being either British or Irish (and therefore EU) citizens. As I said to a friend whose mom is from Derry, “pity the poor Orangemen who for business reasons now has to apply for his Irish citizenship.” “Yeah, make 'em get in the back of the line.” “No, they can come to the front and accept - an Ghaeilge [in Irish].”

kennykb : Toto, I have a feeling we’re not in CANZUS any more!

…Postdoc candidates should have 2 years experience being Judy Garland. OMG. What kind of Internet points would you like? Whatever it is I’m going to try to enjoy making the 3D printer for them.

TheBorderer >[…there is a table of logs. With hearts.]

Hard Right is for state-managed labor unions? But with refusenik stanchions?

“pity the poor Orangemen who for business reasons now has to apply for his Irish citizenship.”

Apply for Irish passport if you can, advises DUP MP Ian Paisley

The DUP's Ian Paisley has advised people in Northern Ireland to get Irish passports following the Brexit vote.