The UK press and TV had been maligning and downright lying about the EU for decades. Remember the sausages, the bananas, the pillows, the unelected officials… They made the EU a huge boogyman that only existed to harm the poor ickle UK. And they swallowed it line, hook, and sinker.

And the most galling thing about this was Johnson’s time as a ‘journalist’ telling many of those lies: 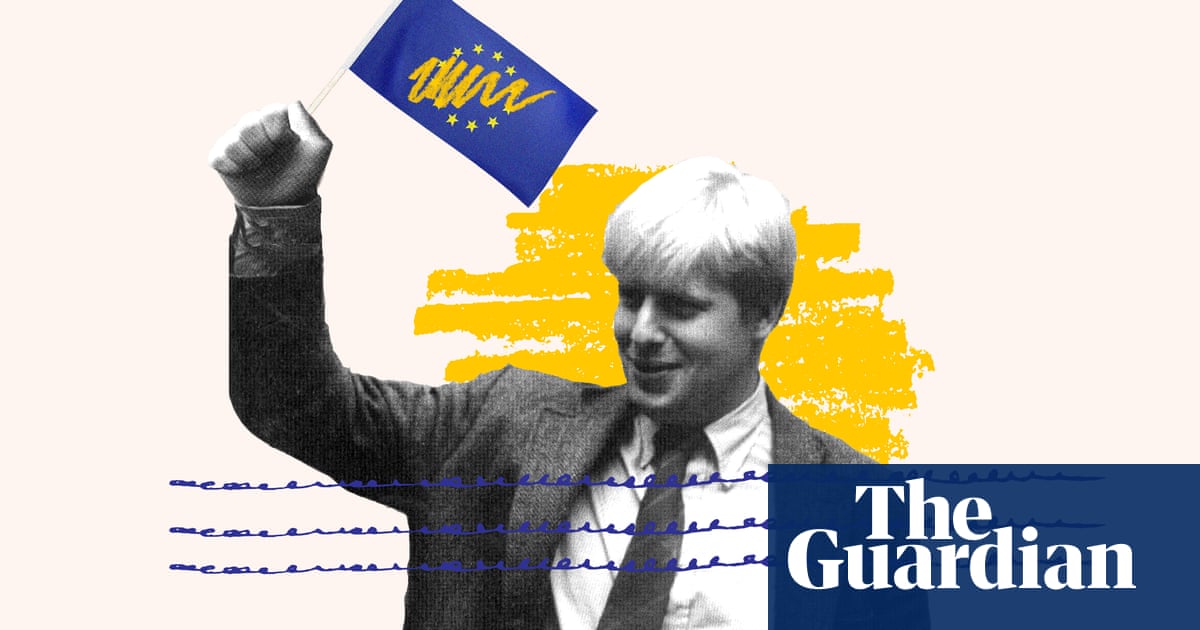 As a correspondent, the likely future PM produced exaggerated tales that were lapped up at home

He truly is a monumental bellend.

They made the EU a huge boogyman that only existed to harm the poor ickle UK.

Well yeah but the UK government has been a pain in the arse of the EU for decades, always wanting more more more like a greedy little child. You reap what you sow i guess so i think the EU are secretly (or not so secretly) glad to finally get rid of us.

They weren’t as far as I know. There was the public bluster at home which official EU had contempt for and then there was the professional bureaucrat class* who actually did the interaction with the EU and as far as I know they were highly respected. Britain definitely did have a reputation for playing, if I may use an Englishism, a straight bat. Unlike some states who profess devotion to the European idea.

*These are not the people controlling Britain’s show negotiations though.

That is an important distinction, sure. You have the MEPs diplomats playing the straight bat while home Tories are rubbing dirt into the ball and never fully wanting to integrate, pretending it can be the “semi-detached member”.

Catalonia doesn’t have the EU on its side. It has nowhere to go.

professional bureaucrat class* who actually did the interaction with the EU and as far as I know they were highly respected.

The UK diplomats were indeed good at their job but to be honest the UK MEPs were a dumpster fire from the beginning.

They were politicians trained and groomed in the two-party system and unsupervised-playground atmosphere of the English parliament where every issue was a (false) dichotomy and every debate a zero-sum game to win points in. Put in the multi-poly-manifold-party system of the EP they often got nowhere because they only knew how to snipe and make enemies but not how to build temporary alliances to get things done.

Which only strengthened the idea the UK was not represented in the EU. It wasn’t, but that was the fault of the representatives.

The Farage and Widdecombe Traveling Clown Show(*) was the last and the worst of it but it was not totally out of character for UK representation in general.

(*With a Thousand Elephants! Come see the egress!)

I deliberately didn’t mention the MEPs…

Every Leave voter to have a lorry parked on their driveway

EVERY Brexiter will be expected to host a lorry on their drive or front lawn to help Kent deal with the 7,000-strong queues expected after the transition period.

As the family tree has a British branch I am not happy. Not happy at all.

I quite like using some of the European Union’s cultural assets-- Europeana, the Patent office, and so on, Most of these have English interfaces-- Even if I’m searching for German, or French material, it helps if the UI is in my language.

But, the ubiquity of English as an interface language is helped by its official status-- and in Ireland and Malta, the two remaining states where English is a lingua franca, the official languages for EU purposes are Gaelic and Maltese, not English.

The English language in the EU after Brexit | VOX, CEPR Policy Portal

After Brexit, English can no longer retain its status as one of the EU's official or working languages. This column uses data on languages spoken in the EU to show that post-Brexit, German and French

Friendship is at the heart of everything we do, says government giving out...

MINISTERS who gave contracts for Covid work to close associates have defended themselves by saying they were only guilty of being great friends.

Though I strongly disagree that being trans or supporting trans is a working class issue specifically.

I just saw this today

Often when discussing transphobia popular discourse focuses on overt, interpersonal hostility and street level violent hate crime. While these are indeed real and very serious issues, this focus on the interpersonal and the overt often leads to a failure to recognise the measurable economic effects of transphobia on trans lives. This constitutes a form of hidden, endemic, systematic violence against working class trans people.

A 2015 EU report[1] found that trans people in the EU were more likely than their cis peers to be in the bottom 25% of earners and that around a third of trans people reported experiencing workplace discrimination in the year leading up to the survey and a similar proportion had experienced discrimination while looking for housing. Unsurprisingly, given high levels of workplace discrimination and general social stigma, trans people are disproportionately more likely to experience unemployment. Emma Rundall carried out a survey of trans people as part of her 2010 PhD thesis[2] and found that 14% of respondents were unemployed, around two and a half times the then national unemployment rate (pp 139 of thesis), this is consistent with a general trend in the literature for higher rates of unemployment amongst trans people.

Housing discrimination and high rates of family rejection and abuse also lead to higher rates of homelessness for LGBTQ people as a whole and particularly LGBTQ youth. A 2015 report by the Albert Kennedy Trust [3] found that LGBTQ youth were “grossly over-represented within youth homeless populations”, stating that one in four young homeless people were LGBTQ, the report also found that a majority of young LGBTQ homeless people reported rejection or abuse at home as a major factor in their homelessness, with an overwhelming majority of housing providers failing to recognise the unique and specific needs of this marginalised community for housing support. Specific figures for trans people alone in the UK are difficult to find, however in Canada, a culturally similar developed nation, the research and community organisation Trans Pulse carried out a study of health outcomes in 123 trans people aged 16-24[4], with a view to measuring the effect of parental support. All respondents reporting “strongly supportive” parents reported being adequately housed, however, almost half of the two thirds of respondents who did not have strongly supportive parents were “inadequately housed” (homeless or in a precarious housing situation), around one third of the total sample.

As well as the economic effects of transphobia itself, we can also consider the intersections of transphobia and class, i.e. the ways in which class and transphobia interact and magnify each others’ effects; the greater financial resilience of the middle and boss classes, the ability of wealthier trans people to buy their way out of some forms of transphobia, the classed nature of the bureaucracies that trans people are often forced to navigate and the elevation of privileged voices within the broader trans community as the authentic voices of all trans people.

And the most galling thing about this was Johnson’s time as a ‘journalist’ telling many of those lies:

As a correspondent, the likely future PM produced exaggerated tales that were lapped up at home

He truly is a monumental bellend.

He was known amongst the EU correspondents from the UK as being a regular late arrival at whatever briefing the EU was giving, sitting down next to another UK press person and immediately demanding: ‘tell me what they have said so far and why it is bad for the UK’

Britain definitely did have a reputation for playing, if I may use an Englishism, a straight bat. Unlike some states who profess devotion to the European idea.

Yes. UK enacted and enforced pretty much all EU regulations as intended. Unlike certain (mostly southern) European Union members who picked and chose or enacted but deliberately did not enforce.

As the family tree has a British branch I am not happy. Not happy at all.

As my family tree does not have anything but a British branch, I am very not happy. Oh for an Irish grandparent.

I wasn’t aware of this, thanks for the link!

Secession by states is built into the Australian constitution. Western Australia have voted twice to secede but haven’t reached the required majority. We are seeing a version of that now with covid lockdowns where WA are blocking movement into their state, even from small states and territories where the covid risk is absolutely minimal.

Canada also has a legal secession path for provinces. Quebec has sabre-rattled about that for decades and came close twice with narrow losses in referendums. This forced the issue in SCOC and they ruled that Quebec can do it, but only by national referendum. They can go, but only if everyone agrees it’s for the best. Since the very narrow “no” vote in the 90s, the Parti Quebecois secessionists have lost a lot of favor. It was kinda our Brexit moment and everyone got spooked that it almost worked. People wanted recognition and were emotionally venting at the ballot box. They didn’t really want to have to run a country all of a sudden.

Nothern Ireland has the explicit opportunity to vote for independence (or rather, to join the Repuplic) built in to the Good Friday agreement (as I understand it). But then, apparently ‘we’ don’t put too much stock in international law anymore…

No, but after the announcement of different tiers of lockdown by Boris we got ‘tiers of a clown’.

Nothern Ireland has the explicit opportunity to vote for independence (or rather, to join the Repuplic) built in to the Good Friday agreement (as I understand it).

Yes but no but yes sort of.

So lots of hoops to jump through, and no guarantee of success.

What also isn’t talked about is that if Scotland gets independence then Orkney and Shetland may also want independence as they have a different culture to mainland Scotland and only became part of that country 550 years ago.

It’s really telling how being an American impacts my sense of time, as I saw 550 years and said to myself “ONLY? But that’s a long time!” Then I realized in the history of Scotland, England, Wales, and Ireland, it is not that long at all.