Brooklyn College prof: boys aren't men unless they sexually assault someone at school

That is not a club where I want membership. I will hang out over here with the rest of the other failed men, happily not sexually assaulting anyone.

…sissies who lack virility, a sense of decency, or the masculine judgment that has characterized the greatest civilizations: classical Athens…

Should someone tell him?

Waiting for “What Chimpanzees can teach us about sexual assault”

What’s he teaching, how to be a shit stain on the earth?

He’s a business professor, so…kind of?

Today I learned that I’m not a man.

Waiting for “What Chimpanzees can teach us about sexual assault”

Bonobos live in what we might think of as a matriarchal hookup culture, one that not only poses no danger to females, but also knits them into authoritative posses. Does that mean female-on-male sexual control is “inherent” to human nature? Of course not. But it does suggest that male-on-female sexual control isn’t inevitable or natural either. Chimps provide one model; bonobos, which some researchers believe are even more closely related to us than chimps, provide another. Think of that the next time you hear sexual coercion dismissed as a deeply programmed, essentially human behavior. Or see a male primate snarl aggressively on TV, in a rage because he’s been called to answer accusations that he sexually coerced a female. 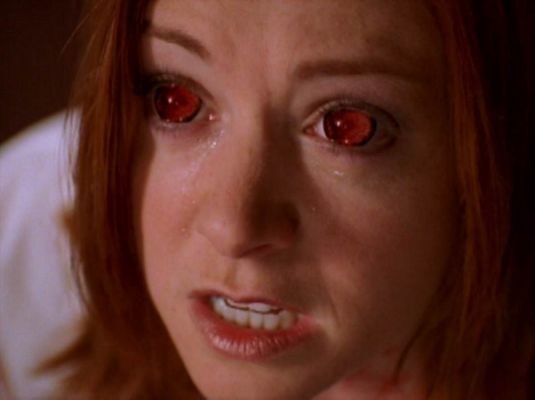 I cannot even with this utterly outrageous fucking bullshit. Words won’t come, so I’ll let the gif speak. 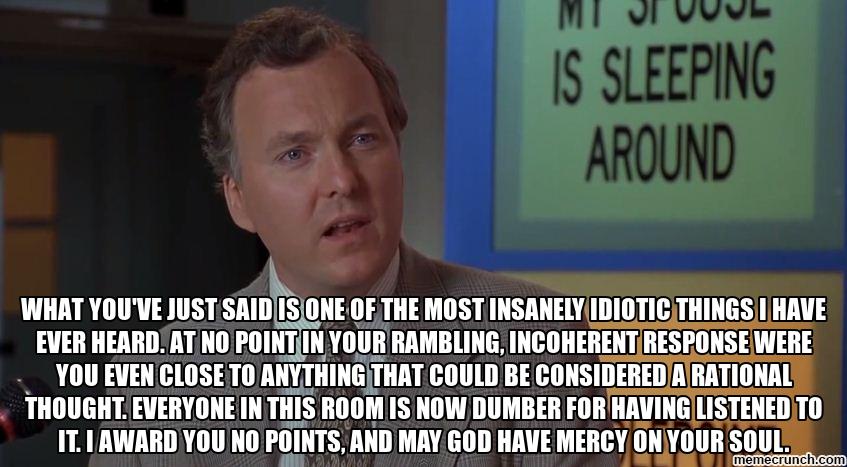 Ok, seriously, what does this guy think “spin the bottle” means. I’ve never heard of a version that involves covering someone’s mouth to prevent screaming.

As far as I know, “Spin the bottle” is a game one chooses to play, and therefore has nothing to do with sexual assault. But he’s very deliberately invoking a false equivalence in order to excuse outmoded notions of male dominance and to promote rape culture.

Yeah… this doesn’t count as free speech, not by a long shot.

The confusion there really highlights the inability to grasp the concept of consent.

Good lord, what kind of crazy-ass version of spin-the-bottle did this asshole play?

You know, I remember being a high school boy.

I was pretty awkward and didn’t spend a lot of time interacting with girls really at all, but statistically there is a good chance that I made someone uncomfortable at some point, probably without realizing it. Most teenagers are pretty self centered and even if they try to think about other people tend to be terrible at empathy. Listening to women I know later in life and learning how (to me) innocuous seeming situations worried them – not because of what did happen, but what might happen – has been eye opening.

But you know what I never did? Pin someone down and cover her mouth so she couldn’t scream.

Again, I was never really invited to those spin-the-bottle or truth-or-dare make out parties like I heard about on TV, but my understanding is that those also don’t usually involve forcibly restraining someone. I’m not saying that peer pressure and shaming are not problematic, but that not what we are talking about here. He must be thinking of some other game.

As an incitement to violence, I disagree that this “gentleman’s” speech is protected by the 1st Amendment in this case.

Yeah… this doesn’t count as free speech, not by a long shot.

Sadly, it’s a fairly textbook “academic freedom” case around which most of the faculty will likely rally to prevent the school imposing any consequences whatsoever upon him.

A fine example of toxic masculinity.

“However, the First Amendment to the United States Constitution protects even speech that many experience as offensive, such as the faculty member’s post,” she said.

Another person who equates freedom of speech with freedom from consequences.

It’s always worth a pause to think when taking action against someone for what they said, but … WTF?

As I recall, the game goes something like this:

I hope that helps.

I’ve stepped in things I think are farther along the evolutionary ladder than this fuckhead. Maybe us ‘failed’ men are wired different and don’t get it, I certainly don’t. What, does all higher reasoning cease at the sight of a woman’s skin? It’s fuckers like him that will harp on and on about personal responsibility but sure as shit will make all sorts of excuses for violating women.

Christ, this blather was so stupid I can’t clearly parse thoughts much more than revulsion. But attitudes like this have got to get flushed out of shadows. I had no idea until recent times how many men did not understand how consent works and did not consider that not everybody’s libido is like theirs- if they even cared. It’s a frame of mind almost alien to me, but hey, if I’m not a ‘real man’, then I wouldn’t, I suppose.

And he’s in a position to teach kids? What’s he teaching, how to be a shit stain on the earth?

Maybe he’s just position himself to be the next you know who?

Forgive my ignorance, but my impression was that American constitutional guarantees of free speech are only binding on the government; was this lout’s “opinion” not posted on a private (school) site?

But in 18th-century Britain or 19th-century America, if a young man sexually assaulted a young woman, her male relatives - no sissies they - would have administered some very rough justice indeed, and a jury of their peers, - likewise non-sissies - would have found their actions commendable. Our high-school roustabout might not have survived to professorship in the earlier, more robust and androgenic times he waxes nostalgic for.