Brooklyn College prof: boys aren't men unless they sexually assault someone at school

who looks like a cross between Ray Liotta and an angry fermented potato,

I am really against making fun of people’s physical appearance, but holy shit this is just accurate reporting.

And as such, he cannot be arrested and prosecuted for it. He is in no way, however, protected from the consequences of his assholery. It could (and should) cost him his job, whatever respect he commands in his social circles and subject him to extensive ridicule. I do not expect this to be the case, though, since this particular brand of asshole tends to socialize with other assholes of similar “thought” process. And he will in all likelihood be held up as a martyr to the lost cause of “True Redblooded American Manhood” which is apparently passing from the scene.

This is a call for violence.
Also, student’s success depend on this bit-of -excrement.

Um, no. It’s not. This is not his field of study - he’s a business prof, not a gender studies professor. He’s ADVOCATED FOR ASSAULT. In no way, shape, form, or fashion is this protected speech…

And in care you’re unaware, academic freedom doesn’t mean professors can say what they like in any forum. It protects them from getting fired in the course of their work (researching and educating students IN THEIR FIELD).

Sadly, it’s a fairly textbook “academic freedom” case around which most of the faculty will likely rally to prevent the school imposing any consequences whatsoever upon him.

Can incitement to violence back at this guy pass as free speech as well then?

my impression was that American constitutional guarantees of free speech are only binding on the government; was this lout’s “opinion” not posted on a private (school) site?

He is in no way, however, protected from the consequences of his assholery. It could (and should) cost him his job,

As I understand it, Brooklyn College is part of the City University of New York, hence a public college, hence it counts as being a government body for the purposes of the 1st Amendment: government bodies have greater restrictions than private ones on what speech they can fire their employees for. Not a lawyer, much less an American lawyer, don’t know which side of the line this kind of garbage falls.

Other gems from this guy’s blog:

Prohibit Socialist rather than Racist Speech

Since socialism has been more murderous than racism, pro-socialist speech  should be prohibited before pro-racist speech.  As evil and murde... 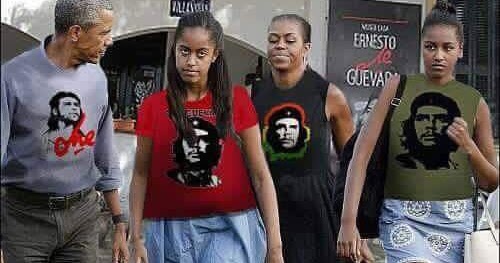 In Case You Had Any Doubt

The photo is doctored, but it is more honest than any previous Obama photo op.

That is some horrid photoshop…

Still advocating for violence against women…

Ah, thanks for the clarification.

Profs at public universities have been canned for racist/sexist statements in the past. I would think that advocating for sexual assault against minors would be sufficient to show him the door, but I am likewise not a lawyer and should not be trusted for legal opinions! On that topic, I am not sure how a guy teaching business gets to be the authority on manhood. I was a college All-American swimmer (not the rapy kind, just FYI), graduated medical school and generally qualify as an alpha male in most circumstances. I am not at all distressed to find that I do not meet this douchebag’s definition of “real man.”

Still advocating for violence against women…

Oh, please don’t mistake me, I’m not defending him, not even in a “I disapprove of what you say but I’ll defend your right to say it” kind of way. In a British university his backside wouldn’t even touch the floor, and good riddance to him. (And that’s not meant to hold up British institutions as morally better; they’re merely less legally constrained when it comes to dealing with PR disasters.)

Okay. I just wanted to be clear why I believe that this is not either academic freedom or first amendment protected speech.

The confusion there really highlights the inability to grasp the concept of consent.

I don’t think it’s an inability exactly - he’s outraged at the high degree of emphasis placed on it. He gets it. He just doesn’t like the implications.

Okay. I just wanted to be clear why I believe that this is not either academic freedom or first amendment protected speech.

And I will defer to you on that.

Apparently all the best people aren’t men, so you’re in good company!

The actual best people; not the Trumpian “best people”.

I think this is relevant here:

This is a pretty creepy way to announce his retirement.

Also, note to self: Don’t play spin the bottle with Mitchell Langbert.

I think you mean Paul Sorvino. They were both in “Goodfellas” so honest mistake, although Sorvino has very different ideas than this prof.