“You think the world revolves around your skin colour.”

That’s so ridiculous. Everyone knows the world revolves around his skin color, his gender, his sexual orientation, his religion…

As someone once put it: “‘identity politics,’ or, as we call it when while people do it, ‘politics.’”

I’d have just gone for “his penis” but your version is more exhaustive.

The Honourable Member for Whitby is actually quite privileged, and she will do just fine, regardless of what Mr Bernier says or does.
I have much more sympathy for people that are actually fucked by the system, like Mr Matthew Charles: https://twitter.com/MattWalshBlog/status/1000796008979288064
What the fuck, America?

Funny enough, attending an Alliance church in my teens was key in my turn to atheism.

Maybe that’s why Harper et. al give me hives the way they do. It’s an immune response.

I am looking to leave the U.S. but to where? Currently, i am seriously checking out Norway.

That is the big question on many people’s minds. Mexico, Panama, and islands in the Caribbean are popular options. I’ve also noticed Ecuador, Colombia, Australia, and New Zealand are getting more interest. However, language & cultural barriers, climate, cost of living, political issues, and infrastructure differences/challenges seem to be the major points people consider before making a final choice.

all we hear about up now is racial issues and indiginous issues and gender issues while government is ignoring all the other responsibilities and concerns of government.

responsibilities such as repressing minorities, and indigenous people.

That may be all you hear, but it’s far from the case.

Yeah, I sure wonder why so many people talk to that guy about those topics. Sure is a mystery with him being so on point there.

Racism; the favored tool of Classism.

My point exactly. There are other minorities being ignored.

It’s not a zero sum game, you know.

So if you can’t cover literally every minority’s problem at once, you shouldn’t bother to try tackling at least one of the problems?

There is a fundamental difference in world view at play here. One one side is Bernier, who believes in the individual and not the collective and the other side believes in the collective and not in the individual. These two do not get along. During their last exchange, Celina Caesar-Chavannes used the tiresome “check your privilege”, the rhetorical spit in the face when discussing something you do not wish to have debated, only obeyed. As Bernier stated, “You … implied I’m a racist because I want to live in a society where everyone is treated equally and not defined by their race.” I would argue that Caesar-Chavannes is being racist since she revels in group characteristics and not recognition of the individual. Invoking “white privilege” is racist as hell.
As well, to say that Celina Caesar-Chavannes has not benefited from privilege is laughable. She’s a Member of Parliament whose boss is the poster child of privilege. I’ll be waiting patiently for her to denounce Trudeau.

ah yes, simply recognizing all of the benefits white people have accrued to themselves over the centuries, and especially talking about it must certainly be more racist than the accrual itself and definitively more racist than enjoying those benefits without recognizing where they came from. that kind of thinking would be enormously funny if it weren’t so deadly in its consequences.

I don’t think it’s really that way… Bernier says that, and thinks everyone should be colour-blind. 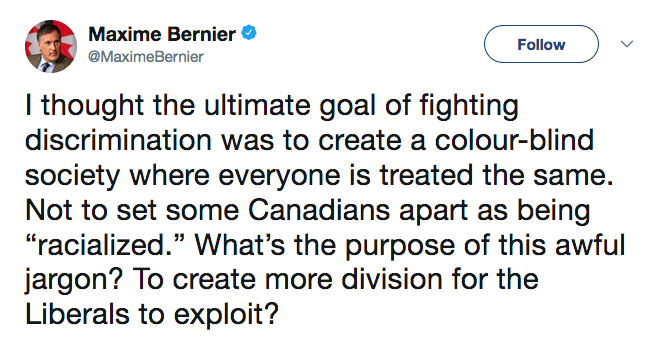 It sounds nice, but the dumbo in the ointment that we don’t have a colour-blind society where everyone is treated the same. There is quite clearly discrimination against individuals based on their perceived membership in some collective: Colour, race, sex, Indigenous, etc…

The Liberals aren’t creating those collectives, only recognizing that they exist. Bernier wants to pretend that it doesn’t happen.

If Bernier doesn’t want to do anything about collective-based descrimination, then he’s not protecting the rights of individuals.

I am looking to leave the U.S. but to where? Currently, i am seriously checking out Norway

A lot of Norway’s prosperity is tied up in oil. While they manage and distribute the resulting sovereign wealth much better than the short-sighted House of Saud or the basket-case Venezuelan leadership it’s still a lot of eggs in one basket (especially with characters like Breivik hanging around in the shadows).

I’d go long on economically diversified countries with strong investments in liberal-democratic values like Canada, Germany, Australia and NZ. Sweden and Finland and Denmark are also good bets. You’re never going to escape right-wing clowns anywhere, but at least in those places they’re usually slapped down quickly when they attempt to threaten core values. As one Canadian told me, as bad as Harper was he still couldn’t invoke God in speeches to the general public like American politicians do and he couldn’t dare suggest that Canada move to an American-style health insurance system.

As Bernier stated, “You … implied I’m a racist because I want to live in a society where everyone is treated equally and not defined by their race.”

No, it was implied he was a racist insofar as he’s either assuming that a race-blind society already exists in Canada or assuming that ignoring racial prejudice will solve the problem of racism. If one refuses to acknowledge that a problem that needs to be addressed still exists then one remains part of the problem.

Also, acknowledging and addressing persistent societal racism (as Bernier refuses to do) is not at odds with individualism; doing the former brings one closer to the ideals of the latter.

As well, to say that Celina Caesar-Chavannes has not benefited from privilege is laughable. She’s a Member of Parliament whose boss is the poster child of privilege.

Are you proposing some transitive theory of privilege here? If you are it’s a bit of a stretch, considering that Caesar-Chavannes is a first-generation immigrant from Grenada whose family arrived in Canada with $100, and who was still rummaging through other people’s trash with her husband in the early 2000s. Does having Justin Trudeau as her boss suddenly make her the equivalent of a wealthy heir to a political dynasty? 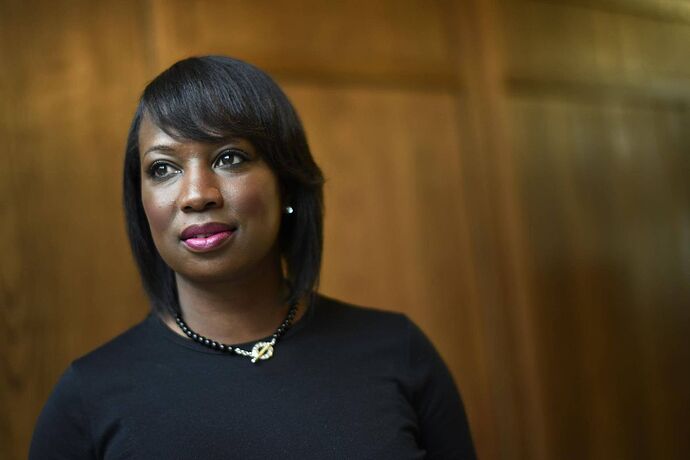 For Celina Caesar-Chavannes, bright, educated, driven – but not immune from life’s pitfalls – resilience was never in question

It sounds nice, but the dumbo in the ointment that we don’t have a colour-blind society where everyone is treated the same.

And white people have been using this same garbage argument for a very long time.

I’d advise against Oz. Australian politics tends to follow US trends, and our local fascists are on the rise (with substantial assistance from across the Pacific).

NZ is probably best if you can get in, but they’ve pretty much bolted the door.

I agree but they are going about it the wrong way. You can’t make a colour-blind society by exacerbating the differences between groups and balkanizing society by race and identity-based policies. This will only breed resentment and give rise to hatred towards the other. It is the wrong approach.

You can’t make a colour-blind society by exacerbating the differences between groups and balkanizing society by race and identity-based policies.

Pointing out that racial prejudice between groups still exists != exacerbating the differences between them or balkanising society by race.