Capitalizing On Uncertain Times, Costco Is Selling A Year's Worth Of Canned Foods For Survivalists

Henny Penny or the acorns of Fall. 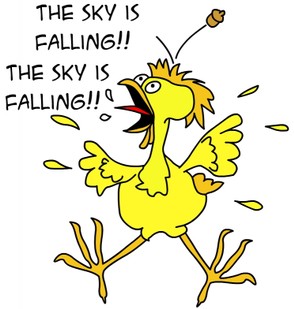 CostCoLostCo is offering a “1 Year Emergency Food Kit” for shoppers: FYI they’re SOLD OUT! So, get your freak out on.

“As we witness saber-rattling over North Korea amid the confluence of hurricane and shooting tragedies, survival kits such as these may be in higher demand than they would be in less eventful (or terrifying) times.”

Costco Tries To Profit From The Current, Terrifying State Of The World

Almost immediately after going viral, the offering quickly sold out.

Huh. At $2.75 a day, I wonder what the meals are like? Probably better than trying to survive on peanut butter, tuna, and mac & cheese.

This kit contains the following items in #10 cans:

Better than Jim Bakker’s slop, but better add a few tins of various spices or that’s going to get tiresome.

I’m counting on not needing the kit.

I love how how he is praising “discreet” packaging.

The whole apocalyptic, fearful view of modern American life is baffling. It’s hard to ascribe it just to those who make money or gain power from it, but I have no other explanations. There’s no War on Cops, yet people write books about it. There’s little actual need for defensive firearms, I’ve lived in dense major cities for 35 adult years and never wanted or needed one, and people in rural areas have even less likelihood of encountering violence. Yet people are full of fear. I know some of you will argue, but we live in one of the safest countries in one of the safest eras of human history, excepting certain neighborhoods in Chicago and Baltimore.

Sometimes it seems In Cold Blood is viewed as the basic narrative of American society, “strangers will come and kill you”.

Sure, prepping in an extreme way is a bit over-the-top. But, having a very well stocked pantry (full of things you’re going to use anyway) is a hedge against all sorts of situations, from inconveniences to emergencies, to being too lazy to go to the the store.

But something like this, full of freeze-dried and dehydrated stuff? Bah. Who likes dehydrated green beans? 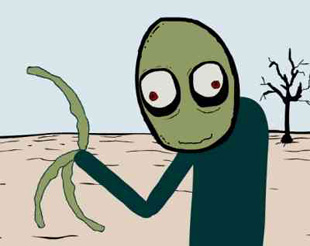 Some years ago we were without power for 10 days, during an ice storm, and we were glad to have a pantry full of food.

2 weeks supply in a rural area? Perfectly reasonable. A year’s supply, presumably supplemented by an arsenal and a bunker? Not in my opinion.

In the last few days I’ve heard numerous rural people on the radio explain why they need weapons to defend themselves because they are far from law enforcement.

Who commits to ten pounds of a single canned item and opens it? Doesn’t this presume you have refrigeration?

Or a crowd to feed, maybe.

I presume that you’re supposed have a few big cans on the go at any one time, and once unsealed, they’re good for the month or so to finish them.

After a year of that, people are going to be crawling out of their bunkers moaning “cheeseburgers!”

Or a crowd to feed, maybe.

There’s a stereotype of preppers as selfish paranoids armed beyond reason, but in the event of a two week disaster, they could feed a lot of neighbors off a “1 year supply” too. Is that so bad?

Look at that old prepper who was losing his house and donated his stored food to Puerto Rico. He was equipped to feed and shelter a lot of people.

You know, I only see those buckets in their ready-to-serve state, so I’d thought that at least some of them might be some creepy shelf-stable ready-to-eat glop, but… ugh.

Coming from the South and having had a preacher for a grandfather I’d say it has allot to do with religion and the “fear of God”. Fear motivates and what better way to motivate a following by saying that their existence will come to an abrupt end in an apocalyptic fashion and that they should always prepare for judgement day. Sure, not literally like going to Costco and buying a years worth of food but, preparing your mind aka “soul” for that day… It gets into people’s heads and seeps into culture. And as we have seen lately the older one gets the more fearful and paranoid one becomes as that day is just around the corner.

But something like this, full of freeze-dried and dehydrated stuff? Bah. Who likes dehydrated green beans?

IKR! You’d think that by now someone would have figured out how to produce a gourmet version of survival food.

Apocalypse is the status quo, and doesn’t need to be fearful. It’s simply the fuzzy edges of our maps of the future. People fear uncertainty I guess because they feel attached to their stuff, relationships, and lives - which is not very mature or healthy. But capitalist culture profits from this.

There’s no War on Cops

You’re kidding, right? I am a War on Cops. Or against anybody who feels it is their right to mind other people’s business. Licenses to Troop revoked by request or necessity!

The whole apocalyptic, fearful view of modern American life is baffling. It’s hard to ascribe it just to those who make money or gain power from it, but I have no other explanations.

It has deep roots in American colonial religious history (lots of Millennialism), continued through to more secular populist frontier movements, and was later bolstered by what Richard Hofstadter termed “The Paranoid Style in American Politics.” All this before the modern American right really kicked it into gear and monetised it directly via televangelists, the NRA, and survivalists.

There’s no War on Cops

You’re kidding, right? I am a War on Cops.

I’m referring to the popular meme that policing is especially dangerous work and that it’s danger is increasing. Neither is true.

If the apocalypse happens, a lot of survivalists will be kicking themselves. “Why the hell did I store up a year’s worth of food? I mean, ‘end of the world’, right?”

It might also be tied to pioneer tradition, living in a new land where losing a year’s crop to flood, fire, drought, dustbowl or plague of stobor was a possibility. A year’s worth of surplus might have been the safe limit for their storage technology.