Wow that is freaky, but it has to be a just a weird angle. The car in the right lane turning seems to react and slow down to the “ghost car” before we see it.

Mitosis. It budded off the right front part of the car where we couldn’t see it.

You can see it coming if you look closely at its headlights reflects in the wet ground.

Yeah, I treated it like a puzzle too, and I think I can see where the car comes from… bear with me.

I think it comes from between the tram and the white truck (or possibly behind the truck and car), gunning it and risking a lot to get through the oncoming traffic. You can see it’s lights before the cars begin to cross - accelerating quickly just before they go out of view - between the truck and the tram. you also see the lights briefly in reflections from the other side of the road.

You can also see the rear of the “ghost car” if you look carefully at the profile of the right hand side of the car in front of the camera car, the car in front just happens to block the view almost pefrectly throughout the video.

No tricks, no after effects, just an idiot gunning through an intersection and tricksy viewing angles.

Last time someone cut me off that way it was in a DeLorean.

When it’s looped like that you can clearly see the reflection of the car approaching - the car itself out of view. Shame the blue mark masks the lights of the “ghost car” when it first comes into view though. Nice find.

Credit where credit is due: http://www.reddit.com/r/gifs/comments/236ba2/explanation_of_the_ghost_car_gif/

I totally got this Ghost Car thing figured out: 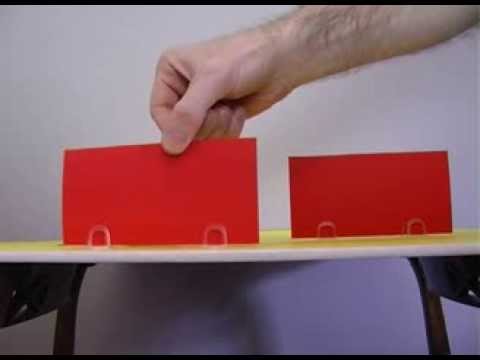 The Mystery of the Red Cards

The Mystery of the Red Cards

Reminds me of the ref who appears out of nowhere:

Weird, that car appears to traveling at a speed significantly less than 88 MPH.

Just goes to show you how universal that interjection is. I didn’t have time to get the “ck” out when I got hit by a truck while on my bicycle, though.