One of the most charming things in the movie Good Bye Lenin (set in East Germany around the time the wall fell) was the hero’s quest to find East German food favorites for his fragile mother who didn’t know about the reunification. I’m sure an entire generation of former East Germans felt a real nostalgic twinge when he found a jar of pickles or the like.

This is a lot like the retro 1950s cookbooks that were popular in the 1980s in the US. They are sure to evoke memories.

Actually a collection of (allegedly) autobiographical short stories and commentaries, each one culminating in a recipe: 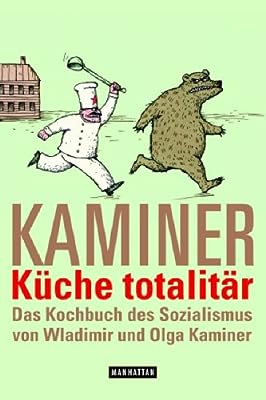 Here’s one I found on the interwebs:
http://www.metamute.org/editorial/articles/emotional-life-possessed-venedikt-erofeev-subjectivity-and-material-world-read-mikhail-epstein
APPENDIX: excerpt from Erofeev’s poem in prose ‘Moscow Stations’ (translated by Stephen Mulrine, Faber & Faber, 1997).

'You see, vodka on its own, even straight from the bottle, offers nothing but aggravation, weariness of spirit. Mixing vodka with eau-de-cologne gives it a certain whimsy, but absolutely no pathos. However, you drink a glass of Canaan Balsam and you get whimsy, ideas, pathos and even a hint of metaphysics to boot.

So which ingredient of Canaan Balsam do we prize above all others? The meths, of course. But in fact the meths, being the mere object of inspiration, is itself wholly lacking in inspiration. So what is it we actually rate most highly about methylated spirits? Why, its naked taste sensation, naturally. And even more so the miasma it exudes. And to release this miasma you need just a soupcon of perfume. That’s the reason you have to add some sort of dark beer to the meths, preferably Ostankino or Senator, in the proportion 1:2:1, along with clear varnish.

Now, I’m not going to tell you how to distill varnish, that’s kids’ stuff. You know, it’s weird, nobody in Russia knows how Pushkin died, but everybody knows how to distil varnish.

Anyway, you’d better write down the recipe for Canaan Balsam, you’ve only got one life, and if you want to see it out, you don’t make mistakes with recipes:

So there you have it Canaan Balsam (popularly known as a Silver Fox); a blackish brown liquid, in fact, of moderate strength, with a persistent aroma. Actually it’s not even an aroma, it’s an anthem.

The anthem of democratic youth. Yes, that’s true enough, since it brings out vulgarity and sinister tendencies in the people who drink it. I’ve seen that so many times!’

I got this book for Christmas, and it’s a truly fascinating piece of history. I have no desire to make any of the recipes, but the anecdotes and history behind them is really worthwhile.

For example: when French cooks visited Russia in the prosperous 60s, they introduced people to fancy salads with vinaigrette dressing. As resources and finances dwindled, so did the salad, until by the 80s, it was called a “Vinegret” salad, and was just potatoes, beets, carrots, and sometimes sauerkraut, drizzled with nothing but unfiltered sunflower oil, and that’s the salad people know today.

If you go to Spain and pick up a menu del dia in some backwater town it will inevitably have salade russe on it: tinned vegetables in Mayo. Fucking awful.

I love that movie! The whole thing is great, but the search for the pickles is kind of the best… and the statue scene: