It also felt too much like the writers never bothered to understand the Federation, how a post-scarcity, post-currency society could function, yet never gave up the pretence

DS9 took on the unsavory topic of terrorism head-on well before the events of 9/11 seared it into the American consciousness: in the aftermath of the Cardassian occupation, with the shapeshifter scare on Earth and the struggle between security and liberty that ensued, and also with the plight of the Maquis. Star Trek always offered hope we’d be past petty greed and oppression in the future, but it was never so “pretentious” as to explain how it could be done. It would simply be settled and no one could imagine living any other way. But that also didn’t mean conflict would cease to exist in the universe, either, or that we would never wrestle with the value of freedom versus the threats against society.

I’ve been watching them all for the first time. Can’t say I’m a huge fan of DS9, I found episodes dragged and half the characters were uninteresting. I adored Next Gen and right now am more than a little in love Janeway.

It’s backstory and history all about Garak 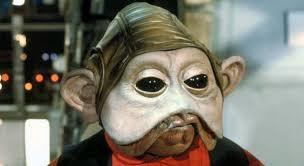 (And FWIW, I agree with you. TOS or nothing!)

There was a reason why TOS was explicitly told not to set any stories upon Earth of the time: it was because the stories were to be fables, avoiding all mention of how society within the Federation worked lest some contemporary social group get upset about it. There were other conceits as well, that space was so vast that even subspace communication was not instantaneous which was lost, alas. I think what made a lot of TOS stories work back then was the feeling that the Enterprise was truly on its own. In fact, the idea behind the Star Fleet was that life on Earth had become so tame that venturing out to the fringes of Known Space was a goal to itself. Even Harry Mudd traded not so much for money but for thrills.

I admit, I lost track of DS9 when Babylon 5 was running, but every time I checked in little things kept nagging at me, like how everyone was on the same clock, same day/night cycle no matter which planet they were on, how there was no sense of scale, how so many little things were taken for granted which should have been wildly different. Believe it or not, what I liked most about B5 was how it seemed space really was weightless, with no up or down – the Earthforce ships and Starfuries were good examples.

As far as moneyless societies go, the best take by far is still the Culture as envisioned by Iain M. Banks, with advanced AI managing resources in a post-scarcity society.

Right made an arena we can do this properly.

Of all the Moogi/Ferengi episodes you do know she only ever did the first one right? Cecily Adams portrayed the Ferengi mother for the rest of her appearances.

All these comments on DS9, and no one (unless I’ve missed it) mentioned Louise Fletcher’s Kai Winn.

What an actress, what a role. I think I sometimes hear her voice in nightmares to this day.

And it’s another example of how breaking the Roddenberry mold was the right thing to do. Having the oppressed, victimized Bajorans produce a villain of her stature was just so satisfying.

Farscape is by far my favorite space series…but Lexx? I’d watch any Star Trek before Lexx, hell I’d watch all of Battlestar Galactica before Lexx.

Never watched Blake’s 7, but I pretty much agree except that Lexx is a couple spots too high.

Farscape is by far my favorite space series…but Lexx? I’d watch any Star Trek before Lexx, hell I’d watch all of Battlestar Galactica before Lexx.

(and, more seriously: underneath all of the extreme deliberate cheesiness, there were actually quite a lot of genuine SF plots. At one point they destroyed the universe with a flock of runaway Von Neumann probes…)

I liked Kai Winn as a character, but I didn’t like the way her story ended.

It’s as if Italy and Vatican City were occupied by, say, Russia, and everyone was oppressed.

And then the Russians are beaten back, and Vatican City is freed.

And then some weird Italian farmer comes along and starts whispering in the Pope’s ear that God is powerless, so the Pope should start worshipping the Devil.

And then the Pope’s advisor figures out that the person whispering in his ear was actually the Russian governor in charge of Italy during the occupation and oppression (surgically altered to look Italian), but the Pope then kills the advisor to keep the secret, and follows the Russian Governor in his plan to release the Devil from Hell.

I can understand having the religious leader of Bajor as an adversary, and they did a good job of making her motivations for being Sisko’s adversary make sense. But then they threw that all out the window and had her basically go crazy.

But then they threw that all out the window and had her basically go crazy.

I think you are missing one vital piece of Winn’s story.

Kai Winn dedicated her entire LIFE to the prophets and they never spoke to her once. Nor did she ever have an orb encounter. Then this silly little human comes in and day one gets a meet and greet with the prophets. Jealousy and power mixed together. Then the PahWraiths actually show up and she gets physical proof. Easily understandable why she went the way she did.

with the plight of the Maquis

I loved the whole jean Valjean/ Javert episode with the Maquis… I thought they did it well, bringing out those themes and pitting Eddington’s idealism against Sisko’s belief in the system.

But TNG gets a pass because they had an episode censored by the BBC and Sky. https://www.youtube.com/watch?v=CHsoPPynIIc

It’s just too bad all his idealism ever got him was a anti-coagulant gut shot followed by a brutal death. He never should have left behind his lucky loonie.

With Brexit, it might still happen! So much for their bans and cuts.

Oh wow! Why am I not surprised by that?

I’m guessing most/many Americans don’t imagine that a stereotype like that is offensive, but comedic. It does bother Irish Americans, though (myself included). Much like Italian Americans don’t like being portrayed as nothing but gangsters in the media, Irish Americans don’t particular like the whole drunken Irishman stereotype. But then again, the context between the US and the UK and their relationship to Ireland is much, much different.

At least Colm Meany became a central and meaningful character in DS9. He was never really a stereotype in that show.

Indeed. Do you or @robertmckenna know if there is still talk about reunification between the Republic and the North? Talk of the Brexit has really fallen off here, thanks to the stupid election.