I hate that the Amazon markup is nearly 163% 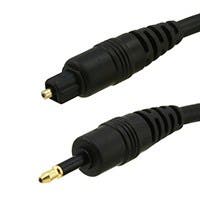 The Amazon price, shipped via Prime, is well worth it to me.

Monoprice’s shipping costs aren’t too bad for small items if you don’t mind waiting a few days. It looks like for this cable it’s $0.99 for 3 - 6 day service to most of the continental US.

(Of course, for Prime-like two day shipping it’s considerably more. Amazon is better when you want it soon-ish.)

That is much better than I’m used to. Last time I paid about $10 for a few cables.

Do other computer manufacturers incorporate a proper ToslInk port?

Chromecast Audio also needs such a cable if you want digital out.

Some dedicated soundcards probably do, but it doesn’t make any difference. My toslink cable came with a 3.5mm adapter that’s so low-profile it’s hardly noticeable, and obviously it doesn’t degrade the signal at all. I don’t know why @jlw thinks mini-toslink is a pain, and I don’t know why you’d get this instead of a standard cable + free adapter.

Adaptors get lost? Some Adaptors change how the cable hangs.

Anyway, I’m just glad that my iMac has an optical out-- even if it secreted inside the headphone jack so as not to offend somebody’s aesthetic preference. I use it to connect up my headphone amplifier/DAC

This adapter snaps on pretty tight, and being a cylindrical connector it lets you orient the cable any which way instead of the one direction that the standard connector demands. I don’t think it’s just about aesthetics, it’s that there’s no reason to take up space with a dedicated port that most people won’t even use, when you can get analog or optical from one multipurpose port. (I use mine for a long optical run to a DAC on the other side of the room, no worries about interference along the way.)

Chromelink Audio is the same. I haven’t yet got a cable to try it though.

Why list this wrong? The connectors on each end are identical if the picture is accurate.

Bottom-line: This will discourage the items sale because it raises uncertainty. When you promote an item, do so with specificity and accuracy or do not do it at all.

They either changed the picture, or you’re wrong. The two ends are clearly different. It looks exactly as advertised to me.

Adapters work fine, but why not just get the right cable?

In case you want to use it as a standard cable sometime. I don’t think there exist any female-3.5 to male-standard adapters.

The KMart ad beneath the post just auto-played on my machine, WITH SOUND. Is this the direction we are heading? Sponsored posts, a glut of sponsored posts, then chumbox ads, now this. What’s next?