Chess so boring that the Grandmaster dozed off

Wow. Wish we had more details–did his opponent wake him up, or sit quietly while Carlsen’s clock ran down? How long was he out, how much time was left on his clock when he woke up?

Looks like high chess bonus is not of much use for a saving throw against vodka. 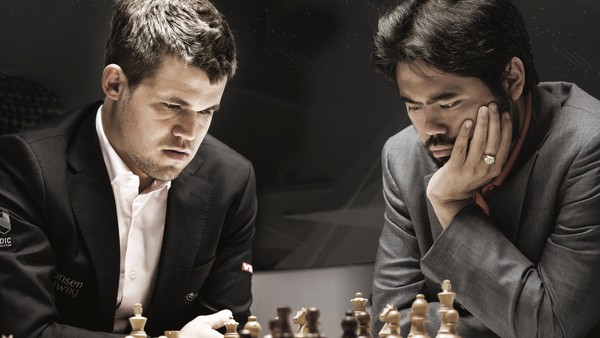 Also - it wasn’t his move at the time.

Chess is a Sport? I’m having a hard enough time accepting that a physically demanding performance art like figure skating counts as a “sport,” but I’m going to draw the line at any activity that a disembodied computer algorithm can master.

Chess is a Sport?

It is and it is good that it is. At least I have one sport to like that does not involve guns.

While I’m somewhat inclined to agree, it’s pretty interesting to note that according to noted Stanford neuroscientist and honorary baboon Robert Sapolsky (who my wife once took a class from) chess grandmasters in the middle of an intense tournament can burn 6000-7000 calories per day. So there’s no question that there are some real physical demands.

“You have two humans, and they are taking part in some human ritual. They are sitting there silently at a table. They make no eye contact; they’re still, except every now and then one of them does nothing more taxing than lifting an arm and pushing a little piece of wood. And if it’s the right wood and the right chess grand masters in the middle of a tournament, they are going through 6,000 to 7,000 calories a day thinking, turning on a massive physiological stress response simply with thought and doing the same thing with their bodies as if they were some baboon who has just ripped open the stomach of their worst rival, and it’s all with thought, and memories and emotions. And suddenly we’re in the realm of taking just plain old nuts and bolts physiology and using it in ways that are unrecognizable.”

Interesting. I imagine those calories must be converted to heat energy at some point—does that mean you could see who’s thinking hardest if you watched them under an infrared camera?

Yeah, I’d imagine that their heads would warm up some, but when I dug into it further it’s a little more complex than just the brain circuitry consuming energy on its own. It’s a whole-body stress response thing. Faster heart beat, breathing, etc.

Chiming in with an obligatory radio show reference [On Point with Tom Ashebrook]: “Does Chess still matter?”
IIRC, Magnus is one of the new, young badasses of chess (with shoe contracts and modeling shoots, etc), and one of the commenters in the radio show mentioned that this particular match was expected to go his way. Also, grandmasters regularly try to psych out their opponents–maybe Magnus was faking it just to mess with Anand’s head?

IIRC, Magnus is one of the new, young badasses of chess (with shoe contracts and modeling shoots, etc)

BTW: There’s also a pretty interesting documentary about Magnus Carlsen, that was made almost 10 years ago, available here: http://tv.nrk.no/program/KTCO21000104/magnus-carlsen-prinsen-av-sjakk
It’s mainly in Norwegian, unfortunately, but it features plenty of interviews in English. (again - I hope it isn’t geoblocked)