Chimp in a ball pit

I want to remember how to be that happy again.

Hey! I don’t remember signing a release for my kids to appear in that video.

J/k my kids are much smellier and harrier.

I betcha there’s a lot of saliva and fecal bacteria in there.

Yeah, they better check those chimps over carefully. Every time my kid went in a ball pit, the next day he was at the doctor’s getting an antibiotic for pinkeye.

I hated those things.

(@Papasan must be out walking the dog.)

I’m glad they had a nice time.

Myself, I was bothered by the immediate throwing of all the balls out of the pit. That’s mostly down to bad playspace design, but still, I think even very small bobtato would have a sense that you want to keep the balls in the pit because that’s where they’re fun.

Are chimps just more entropic than bobtata? Or is it like, the screws will either put the balls back or take them away, and you don’t get a say either way, so fuck it, just fling stuff wherever? It’s so political

I think that part of the fascination with ball pits is that they are a sort of water analog. They behave like a fluid, but they are less dense and you can breathe “underwater” So it is no surprise that they were splashing the balls around in exactly the way that they would do with a tub of water.

You should try and sync the chimp video, with the sound of this linked video. It works so much better

What’s going on on the right edge of the video at :50? I feel like chimp butt is censored.

(@Papasan must be out walking the dog.)

Are chimps just more entropic than bobtata? Or is it like, the screws will either put the balls back or take them away, and you don’t get a say either way, so fuck it, just fling stuff wherever? It’s so political

Chimpanzees are basically all politics, all the time. That humans aren’t was the brief highlight of our social and mental development. At least, until CNN and FaceF%¢& came along.

I’m assuming this is an experiment where they prove that chimpanzees put fewer saliva and feces-based pathogens into the ball pit than human children. 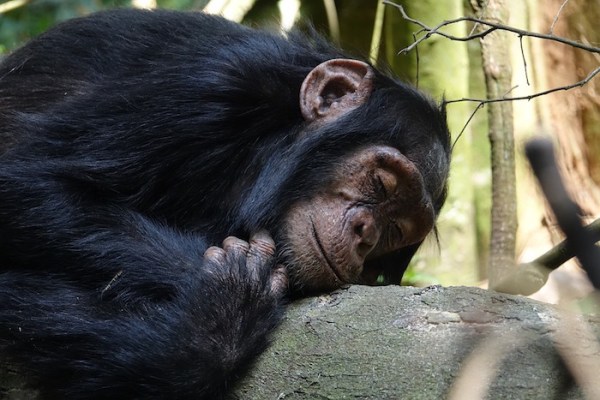 Humans take hot showers, wash their sheets, and use soaps, disinfectants, hand sanitizers and all sort of other cleansers to keep themselves free of dirt and germs. And yet, after all that effort, chimps win in the clean bed department, at least when it comes to personal bacteria.

A new replacement for ‘Better than James Brown, thanks’.

Only because they make a brand new bed every day. If I did that I bet I’d have as clean a bed.

They could have simply taken the chimp to the next IKEA.

That is funny - and scary!

It’s a Brian Eno project from the 1970ies. They did a whole album. Their version of The Blue Danube is out of this world.