Colorado cop Vanessa Schultz couldn't imagine why Latino teen might be running in Wyoming. So she pulled her gun on him

according to Fremont County Attorney Patrick LeBrun, “because it is reasonable to assume a running teen has committed a crime.

I hope he has to find new employment after the lawsuit as well as the fine officer.

Shultz did nothing illegal, according to Fremont County Attorney Patrick LeBrun, “because it is reasonable to assume a running teen has committed a crime.

He left out “brown” but the implication was apparent. The kid was running and did not have his hands in the air, both of which are potentially executable offenses anymore.

Everything else aside (and there’s a lot of that), what the hell is this Colorado cop doing, arresting people in a different state while on vacation?

Enemies don’t become friends just because you’re off the clock.

She may end up with a Commendation, simply because she declined to shoot him.

Or a demotion. It could go either way.

That is true, but it is very sad that some have to look at it that way.

LeBrun says it’s reasonable for Schultz to suspect the 18 year old was fleeing a crime scene.

I have no tables left to flip.

It happens, there was even a whole movie about it back in the 80s.

But in all seriousness god fucking dammit.

More likely is that they will be fired for not shooting. 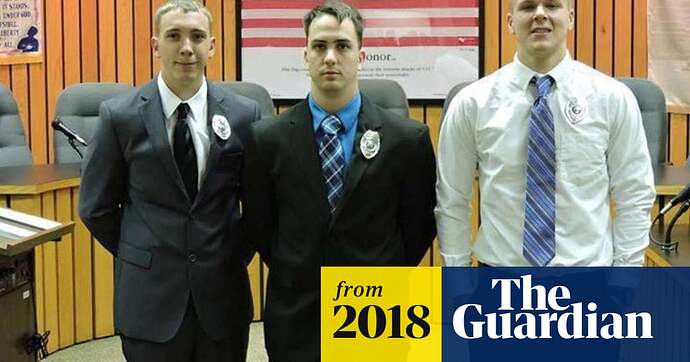 Stephen Mader, a former officer in West Virginia, sued after he was fired for not shooting a black suspect during a standoff in 2016

He left out “brown”

Nope, it’s right there in the title.

Colorado cop Vanessa Schultz couldn’t imagine why a hispanic teen might be running in Wyoming. So she pulled her gun on him

I would not suggest high school track coach.

I was referring to the attorney. At least she was honest about her assholery. He was in full-on bullshit mode.

True enough point…but as a retired soldier, when I was overseas I had all my gear including weapons on me; when I came home and was off duty that gear stayed on base. I didn’t take it with me when I vacationed in New Hampshire.

I agree with @LurksNoMore that while there certainly is a fundamental issue here around race, the easier to diagnose and treat issue is “Why in the fuck does a cop from State A have their weapon with them and acting on any authority in State B.” Seems like an easily fixed issue.

sigh There goes the good apple…

The “black suspect” was, according to the article, suicidal and had a gun but never pointed it at the cop, so the cop tried to talk him down. “Suspect” seems pretty unfair here. (Two “veteran” cops showed up later and shot the guy, of fucking course).

Everything else aside (and there’s a lot of that), what the hell is this Colorado cop doing, arresting people in a different state while on vacation?

Dunno, but I hope that “qualified immunity” doesn’t apply. The officer wasn’t in their own jurisdiction doing their job, so they should (but probably aren’t) be treated by an ordinary citizen. :-/

I may be wrong about how the law works in this case, but the really troubling part seems to be this

The idea that you can apparently break the law as long as you don’t have criminal intent. There’s just something that doesn’t make sense about it. But seems I’ve seen this argument made recently about someone higher up the food chain.

Taxpayer-dinging lawsuits are the remedy here

This is pretty unlikely to be taxpayer-dinging. Colorado’s peace officer indemnity statute applies only to torts committed in the scope of the officer’s employment. Here, the officer was not only off duty, but on vacation in another state where she had no power to effect an arrest beyond whatever Wyoming says about citizen’s arrests. Colorado law on “scope of employment” would strongly favor a finding of “outside the scope of employment” in this context, and a quick scan of police union contracts in Colorado suggests the same result. (For example, the contract between Pueblo and the FOP local says that if a police officer is working security in his off time, his authority to conduct an arrest is limited to a citizen’s arrest, and the arrest is not considered part of the officer’s scope of employment with the city.)

Being a fascist fuckhead is what she was doing.