It’s impossible to tell at this point whether it’s true or just something made up to prep for his defense. What we do know though is that being non-binary or queer does not make you commit a mass shooting

No one is having “grooming events” at a gay club, or any club. It’s all made up boogymen.

Yes, and they’re murdering us for it.

It’s impossible to tell at this point whether it’s true or just something made up to prep for his defense.

Yes, and they’re murdering us for it.

And now they’re leaning into that shit as hard as they can, in order to cause MORE shootings… it’s fucking enraging…

It was from here. I don’t read any right-wing bullshit and I don’t think the Guardian is considered so. 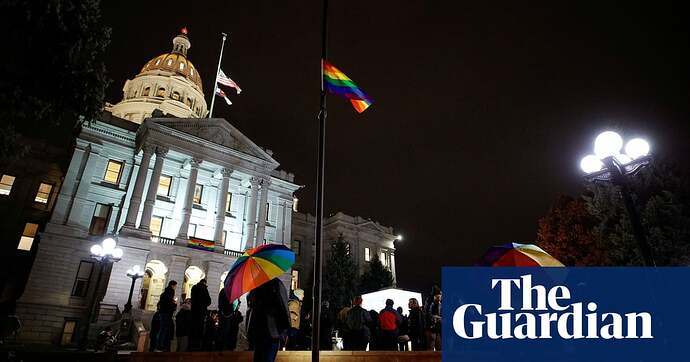 We are in non-violent agreement

It depends on their source. As the other article I posted noted, it came directly from his defense attorney (and I assume that the Guardian got it from the same place). But should we really just accept their word on it, without some corroboration from materials from PRIOR to him shooting up a room full of LGBQT+ people? Perhaps if his social media had they/them pronouns prior to this, then it’s the case, but given how such narratives tend to be used, I think we should use some caution on such claims.

We are in non-violent agreement

His previous comments have been massively homophobic like his upbringing so, in legal terms, it’s really fucking unlikely to be true.

in legal terms, it’s really fucking unlikely to be true.

that, but it’s also fucking terrifying.

Either it’s a smokescreen dreamed up by defense counsel or it is intense self-loathing, either way, it’s certainly immaterial.

It’s interesting (read: sickening) to me how much Hunter Biden’s alleged activities are reported as being indicative of his father’s morals, or Hilary Clinton’s reactions to her husband’s infidelities, or how reporting on any Black American getting killed by police immediately bring their “upbringing” into the conversation, but I’ve yet to see anything linking this murder’s actions to his upbringing by those same news sources.

but I’ve yet to see anything linking this murder’s actions to his upbringing by those same news sources.

But that’s different… white men are individuals, everyone else is determined by their race or biology… /s

Silly, those were Democrats!

When I first saw this headline I was sure it was black humor/satire since it reads like an Onion bit, but apparently no:

The shooter’s dad was just relieved to hear his son was a mass murderer rather than an LGBTQ+ person.

This was a multi-generational effort to raise violent fascist homophobes. 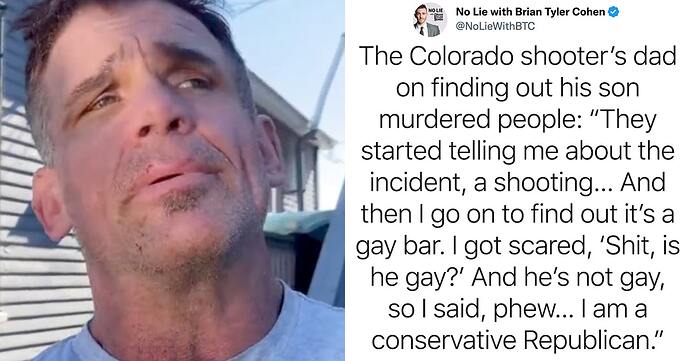