Honestly. Even my own mother, who is a great person, down to earth and loves me to bits, inevitably comments on how ‘tired’ I look whenever I happen to be truly bare-faced (I am very skilled at ‘natural-look’ makeup). I have never told her it was merely because I was completely without my ‘no-makeup makeup’ because she would feel really bad about what she said and its implications.

All that to say: Most grown humans, male or female, look mildly sleep-deprived, softly-blemished/wrinkled and patchy-skinned because we are. We are freaking naked apes going through daily aging, hereditary baggage and weird, ever-changing societal rhythms and trends. If left entirely au natural, it kinda shows.

I stand by what I said

Boy howdy, it sure shows on my ugly mug. I gave up trying in 1988 or so, and have never regretted it. But then, I’m not the one who has to spend all day looking at me.

…have you tried tweed?

I don’t wear makeup, mostly because I’m lazy and never acquired the skills to make it look good. But I have had a professional do it once for me, someone who knows my personality and I looked amazing. I also have friends who wear make up regularly, one because she looks like pale naturally and got sick of being asked all the time if she was sick. It was actually impacting her ability to look professional, which sucks but it’s life. 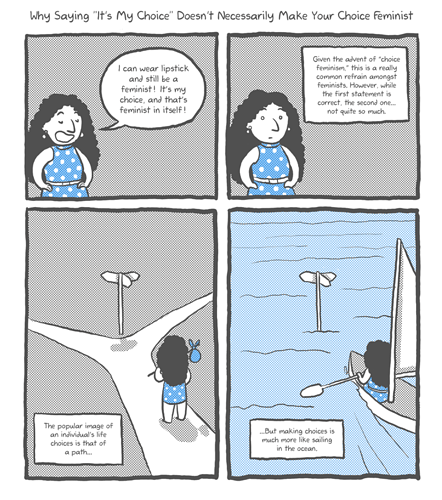 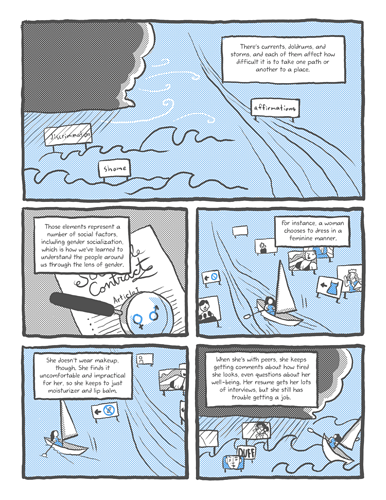 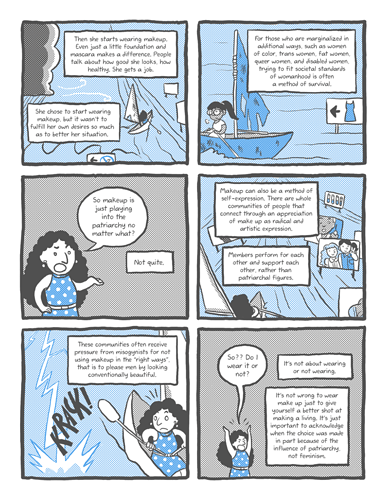 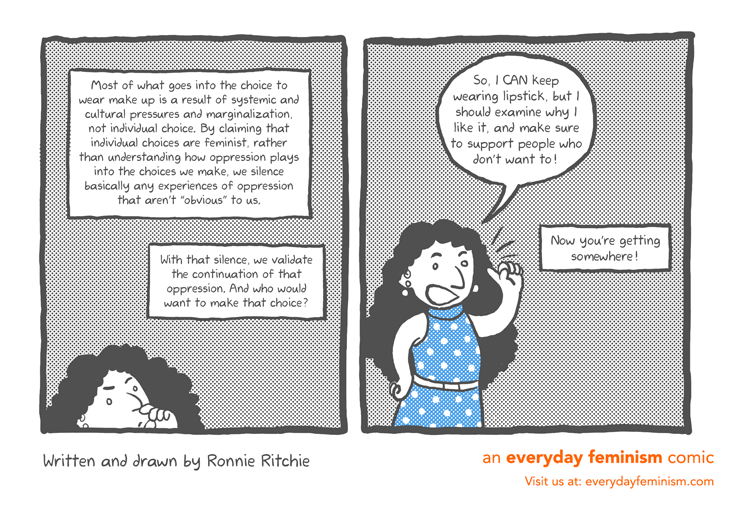 Or, you know, you could just do what you fucking want, because fuck what everyone else thinks.

Thank God I’m a guy who doesn’t care about gender norms. I…honestly…if I want to go off and have fun, I don’t stop and think about how fucking off and having a hike isn’t available to everyone for various reasons. I mean, how miserable would life be?

I also don’t have any patience for the Men’s Rights folks. Men run the world, so it’s not like we are downtrodden.

I agree to a point; the more reasonable ones tend to bring up issues where laws swing a bit far, like where courts decide that because naturally women are delicate, nurturing, and motherly by default, that women should get custody. Hasn’t always been the case, and was considered a win for women in the 19th Century. Now it’s the 21st.

But they tend to frame it as a slight against men rather than being based on antiquated views about women, and they get drowned out by a lot of crazy. I mean, imagine if liberal feminists were the minority, and the majority of feminists were politically lesbian TERFs…I got hooked for a short time by the MRAs because, really, some folks are really shitty toward the guys who challenge the gender norms and imho feminism isn’t, and shouldn’t, be concerned with my plight, but…while I think it’s a shame all MRAs get painted with the same brush, I understand why it happens.

If you’re concerned about equality, you’re a feminist.

I have become a little confused about all this. I rather thought the height of liberation on this topic would be not using makeup, not “pandering” to some idea of facial perfection. Is it merely that everyone is excited by the word “deceit?”

I have always disliked makeup, but it’s not really an issue for me because I’m married to a woman who also dislikes and doesn’t use makeup.

I couldn’t care less whether or not someone uses makeup. It’s entirely up to them. I don’t do it because I’m a male and don’t have any pressure to, and also it seems like a huge pain in the ass.

Some people wear “natural” makeup, some people seem to go way overboard with pancake levels, and others don’t wear any at all. It’s not my job to play beauty pageant judge, and I don’t consider it “deception” any more than brushing one’s teeth or getting a haircut. And really, I don’t feel the need to say any platitudes about how “oh, I really don’t like it when women wear lots of makeup”. Mostly what I have to say is: do whatever makes you happy.

I try to say as little as possible in these feminist topic threads, simply because I don’t have much to contribute and would rather just listen. In fact I’ve already said too much in this thread as it is. That’s my job as a male ally, shut up and listen.

Have a dig about in /r/Redpill; you’ll be surprised* what turns up.

*If by ‘surprised’ you accept ‘not really surprised, but depressed by’.

If you’re concerned about equality, you’re a socialist.

Fixed that for you, you damn pinko!

Maybe you should say something. Sure, she’ll feel bad in the short term, but she’ll have learned something that will be good in the long term. Learning important things that give you insight into your worldview and it’s biases is never without pain. Furthermore, prioritising the feelings of others over your own is one of the characteristics of traditional femininity inculcated to keep women down.

I agree to a point; the more reasonable ones tend to bring up issues where laws swing a bit far, like where courts decide that because naturally women are delicate, nurturing, and motherly by default, that women should get custody

And that is no different than most male inclusive feminist groups.

The problem I have with MRAs is that even the best of them feel very much like ‘separate but equal’ (with the best of intentions) and we all know how that worked out. The worst of them are no different than gender flipped TERFs in my experience.

About 50 years ago there were also groups that called themselves something like MRA, however, unlike today, they were in a mutually supportive relationship with feminists, and would also consider themselves to be feminist.

imho feminism isn’t, and shouldn’t, be concerned with my plight

I suppose that would depend on whether you believe that the patriarchy is as damaging to men as well as women. Feminism should never be focused on men who are victims of the patriarchy (it wouldn’t be feminism if it did), but neither should it ignore them or say that they aren’t our problem.

I’d rather leave it to other people, I have enough problems with PTSD and severe depression as it is.

Or, you know, you could just do what you fucking want, because fuck what everyone else thinks.

When I was young and naive I thought the same. I ended up with death threats, attacked in the street and bricks through my windows which quickly taught me the reality of the situation.

That would explain how you manage to do it.

I suppose that would depend on whether you believe that the patriarchy is as damaging to men as well as women. Feminism should never be focused on men who are victims of the patriarchy (it wouldn’t be feminism if it did), but neither should it ignore them or say that they aren’t our problem.

This seems like a good reason to have men’s groups that are in alliance with women’s groups, but that address issues specific to them. The areas where men are disadvantaged by patriarchy aren’t mirror images of feminist issues for women and generally have nothing to do with women excluding men, so they can be addressed without having to expand the direct scope of feminism too far. I haven’t participated in this before, but it sounds like a good way to celebrate positive contributions and good role models. It also looks liable to be taken over by MRAs though, so I wouldn’t endorse it unreservedly.

And yet, there aren’t any and men’s groups are more aligned with hate groups. That MRAs aren’t concerned about this is should distress them.

I see what you’re saying, but I know my mother- and myself- extremely well. When she says I look tired, it is because I do and I am. Again, most adults are kinda tired, it’s just that women are constantly told we’re somehow not allowed to look it, so it’s almost perceived as an insult. I decided to stop taking it as such and being satisfied with looking as tired as I am (and even, gasp, my age)

When I stopped trying to always ‘put my face on’, my mother saw I looked tired and her response was out of care. My reaction could have been to point out I was without makeup and make her fear that she slighted me but it was more useful for me to actually point out that yes, I AM tired and to endorse that there is nothing wrong with that. I wasn’t prioritizing her feelings over my own, but I recognized that I needed to change my own outlook as well and went for it.

I did teach her something: That her daughter is no longer a dewy young girl but that I’m increasingly comfortable and upfront about it, that I have made peace with the dark circles and hollowing cheeks and that I am spending my brainspace and energies elsewhere. I think that is a good message for all involved